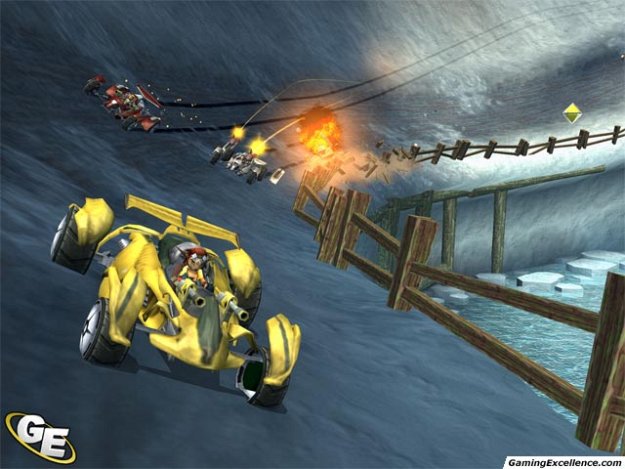 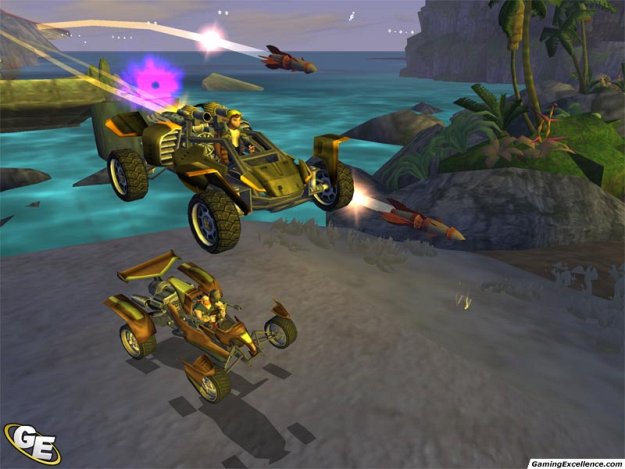 Video games, in some cases, are very much like Hollywood movies. For one; when successful, they both net into the millions of dollars. Secondly, they each feature readily identifiable faces (and bodies) that people will pay to see again and again. And finally, like many actors and actresses who try their hand at singing and other failed forms of over-exposure, videogame makers believe that they can cross genres without repercussions. Or to be more specific, from a platforming game into a racing game. And as is the case in Hollywood, some of these moves are laughable, some are obnoxious and others are just plain fun. This is where Jak X Combat Racing comes into play.

Developed by Sony, Jak X Combat Racing is the 4th installment in the Jak and Daxter franchise. Although the style of gameplay has changed greatly from the first three games to this one (platformer to racer) the characters and universes are still intact and connected within this game. With that said, while the game in and of itself is fun and entertaining, there are elements that keep it from truly being a "must buy".

Before explaining the game mechanics, there is one suggestion I have: play at least the beginning of the adventure mode before playing any of the other types of games. The reason for this is because before actually starting the missions, there is a very well executed training mode which explains what each item does and how to actually drive. This is coming from a person who usually discards the manual and jumps right into the game.

The game mechanics for the most part are like any other combat racing game, although the ones found in this game do take time to become adjusted to. A positive for the game is the turbo/boost mechanics. Essentially, there are two ways to generate and regenerate your boost meter: the first is by simply driving over boost items laid out on the track (these are blue orb-like things), the second method, which in my opinion is neat, is that you can regenerate boost by power sliding. This gives the player another reason to want to learn how to power slide effectively. This is relatively easy to do, but hard to master when time matters. Another aspect of the game that is well done, for the most part, is the execution of weaponry. Basically, there are two types of weapons; those that you shoot in front of you (yellow icons), and those that you shoot behind you (red icons). Each weapon has its own controls via the trigger buttons. In order to become equipped with weapons, you have to drive over them. Once equipped, you can hold on to the weapon for as long as you like; this is very useful at preventing attacks from opponents since you can use rear weapons to counter attacks. The type of forward attacks includes machine guns and rockets, whereas the type of back attacks includes rear machine guns and proximity mines.

While there are many pros that are present within the game, there are unfortunately cons that also cripple it. One of these cons pertains to the unforgivable nature of the game. For one, it is easy to crash your car via hitting a wall. At first this would seem good because it gives the game a realistic attribute (well…considering drivers are shooting rockets and mines at each other), but when you add in the fact that this game plays very fast, you'll become frustrated by the tenth time you crash in a three lap race. The frustration grows to another level when you factor in the fact that, while you may be in first place, the competition is closely behind you. This means that you could drive a flawless race, be in first place, randomly crash near the end, and have four drivers pass you by at the finish line as you wait for your car to respawn. In some cases adding crash realism takes the fun away from the game. The gameplay allows for aggressive driving and use of strategy, but can lead to sheer frustration due to almost relying on dumb luck in order to finish well in a race.

This game has the standard combat racing options: Circuit Race, Time Trial, and Deathmatch. However, aside from the story mode (which is needed to earn new cars, parts, and options), there are a slew of options that are very innovative.

Turbo Dash - a personal favorite. In this event, the objective is to pick up rock orb items and use them to boost. When you have acquired a "rock", a gauge will appear at the top of the screen. When you boost, the gauge starts to fill up by percentages. When it reaches 100%, the "rock" will automatically fire at the nearest opponent, and you gain a point. For each lap you do, the amount of points earned increases by one. The objective, therefore, is to get as many points as possible within the time allowed (you race against others). Due to the nature of this event, prepare to drive fast and crash a lot.

Freeze Rally - In this mode you race by yourself. It is another time based mode but with a twist. The only items on the track are speed boosts and time freeze items. When you drive over a time freeze item, the clock stops for the amount of time you drove over (i.e. 5 second freeze). The screen's outer edges freeze, and then begin to thaw as the freeze clock counts down. The objective of this is to complete the laps with the lowest time possible. (Theoretically you can finish the race with two seconds on the clock).

Death Race - In this mode, you only have the options of picking up weapons and boosts. There are dummy cars that are also on the track. The objective is to destroy as many cars as possible within the time allowed. Almost Burnout-like.

Rush Hour - Another personal favourite. In this mode, you go against oncoming traffic. The only items on the track are boosts and health meter. The objective is to hit as many cars as possible within the time allowed. Per each car you hit, per each lap you do, you gain more points. Unlike in normal mode, you do not stop dead if you hit a car; you drive right through it.

The other options are used using Deathmatch levels (in other words, no racing whatsoever).

Capture - In this team-based mode, the objective is to capture one "neutral" orb and drive it back to your base. The more you do this the more points you'll earn. Picture "capture the flag" but instead of two team flags, it's just one neutral flag.

Artifact Race - the object of this mode is to pick up as many "artifacts" laid out in the area within the time allowed.

Assassin - in this mode, your objective is to kill the person the game randomly assigns you to kill. You only earn points by killing this person. However, there is another person that has the same goal as you…but to destroy you.

The story mode features voice acting which, for the most part, is enjoyable to listen to. The characters have personality and a sense of charm. This is during story sequences though. Things change during races/combat, however. Here, each driver seems to have a stock of lines they say, which sounds fine at first…until you hear the same line for the 26th time. There is also a half-baked play-by-play commentary by an announcer. The only thing the announcer says are the obvious things. For example, after you crash, the announcer may say, "This race is intense". Again, his sound bites become tiresome.

The music in the game, for the most part, is somewhat generic rock. While it does get you into the "feel of the race" if you will, there isn't anything that would make you want to purchase the soundtrack.. The sound effects, from the sound of the cars to the crashes, all sound dead on. This game supports Doubly Pro Logic II and THX.

Considering the nature of the game and the speed at which it runs, the game looks pretty good. When you boost, it actually looks and feels like you are going fast. The images around you begin to blur slightly; this is a nice effect. The tracks are well designed and, in many cases, it is easy to see where certain items are on the track. While driving, if someone crashes near by, the game doesn't slow down; it continues to run smoothly. The only time slow down has occurred during my play has been when you crash, but this is an effect that has been purposely put in for dramatical reasons. This slow down effect has the same elements as seen in Burnout. The only issue, if any, is that the cars do not seem to have a lot of detail on them while driving; it's very noticeable when you yourself crash. However, this is understandable, you didn't buy the game to look at the cars. That's Gran Turismo's job.

Jak X Combat Racing is a game that tries to take the environments established within the Jak and Daxter series, and re-established them within a racing universe. This leads to the emphasis on arcade and speed more so than simulation (naturally). This is a game that you should not feel ashamed of owning if grandma were to give it to you as a gift. While the ideal of combat racing is still based on one of the first and most popular games to date (Super Mario Kart), there are a lot of innovative modes that you and your friends will enjoy.

Overall, this is a solid release, but not exactly a must buy. While the game has a lot of options, the fact that you can lose a race at the last second due to the glass-like crashing system, tied in with the aggressive AI, can lead to a lot of frustration when trying to achieve options. With that said, Naughty Dog attempted to give Jak racing gloves and go at it, and for the most part, succeeded.