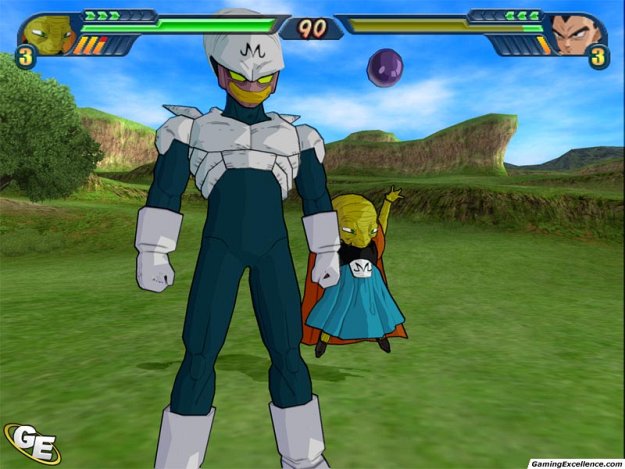 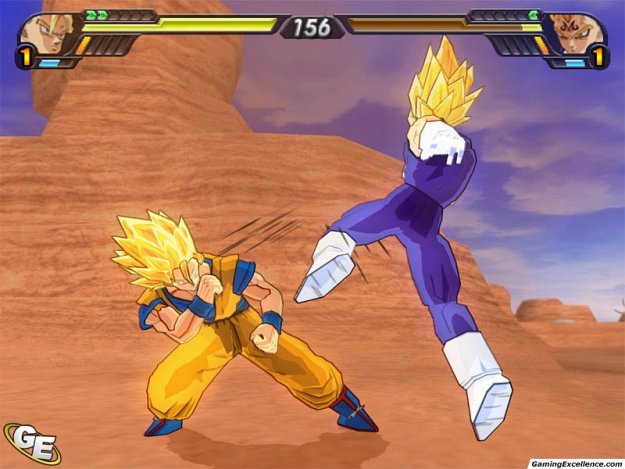 The Budokai Tenkaichi series has been pretty successful in the past by duplicating the style of the battles that people have seen in anime and manga. The third instalment of the series, for the PS2, goes for the gold once more by adding more characters, modes, and moves to play with as you fight your way around large battlefields at blinding speeds, delivering powerful blasts and defeating evil. It's all in a day's work for the Z Fighters.

There are a variety of modes in DBZ:BT3 to spend your time on, but the one that contains most of the game's content is probably the Dragon History mode. It's where you'll be fighting in various battles, taken straight from the anime's storyline. Many of the earlier ones are compacted into only a couple battles, and each of the movies (collected into one saga called the Special Saga), have only one battle for each of them.

Unlike previous titles, there will never be a battle in which you're pitted against impossible odds and can do nothing but lose. Instead, in battles where the story dictates that the bad guy defeats the good guy, you'll take control of the darker side. Additionally, there is an interactive element to many of the battles, where pressing the R3 button will initiate a cutscene that can activate anything from a character's transformation to a battle of energy blasts.

Other modes include being able to fight in a series of tournaments, though at any given time only one is available. As time passes, another mode opens while the previous one closes. The newer additions to the mix allow you to go into something called Dragon Sim mode where you'll have a series of battles, each separated by ten days. During these ten days you can train to raise your character's attack and defence, explore to discover various events, or rest, since training takes away from your health. This mode was interesting, but much slower paced than the others. In another mode, you can also fight a set of predetermined battles that will pit one or more of your characters against a predetermined team of enemies, such as taking on the team of Z-Fighters Yamcha, Krillin, Chaozu and Tien, one after the other.

Of course, if all you want to do is duke it out against the computer or a friend, Duel mode is always available. In addition to simple battling, Duel mode allows you to view and save replays from each battle, though the 'viewing' of such battles is limited to seeing it from either combatant's point of view. So, if you've got a long combo that you just have to rub in your friend's face again and again, now you can.

The battles themselves are still filled with the same fast-paced combat from previous titles; the core mechanics of battle have not changed, and those that have played the previous titles will feel right at home. Battles take place from over the shoulder of your character, and are filled with frantic action that feels ripped straight from the show itself. Zooming through the air, completing lightning-fast combos, and of course, blasting powerful streams of energy (which require "ki", and time to charge) are all par for the course.

Not a lot has changed, but conversely, this means that the learning curve is still steep for anyone playing the series for the first time. Even the basic mechanics of the game take time to get used to, and that's without learning the special moves and combos for each of the characters. That's not to say that there's nothing new here for franchise players; on the contrary, there are a number of new features and abilities to use. With the ability to dodge and counter an oncoming flurry of attacks, teleport behind the enemy to surprise them (though also allowing them to turn the tables, teleporting behind you once more), or any number of additions to the retinue of combat moves, the game is able to mimic the action of the show at a whole new level.

Speaking of the characters, fans of the series will not be disappointed with the huge cast available in this game. There are dozens and dozens of characters to pick from, anyone from the staples of the series like Goku, Vegeta, Picollo and such, to the more obscure characters like Garlic Jr, Dr Wheelo, and Broly. There is a fair amount of repetition in some of the characters, such as the multiple versions of Goku, whose moves change to represent his abilities through the series, Gohan at various ages, or even Vegeta as he changes from evil Saiyan, to resident of Earth, and again to his sinister Maijin form.

The Z-Evolution aspect of previous titles is back as well, though somewhat changed. As before, after certain battles either in the story or other modes, you earn Z-Points. These points can be exchanged in a store to purchase Z-Items that, when equipped on characters, improve certain attributes or create other, more unique, effects. One difference in this iteration is that you can only equip one of each item. However, you can equip each item to as many characters as you want; this is a great change from previous titles, since now you don't need to manage series of items, switching them between characters that you're playing with.

That's not all that Z-Points are used for, however. Each character starts with a maximum amount of Z-Items that can be equipped. Increasing a particular attribute like attack or defense by one or two, for example, costs one or two points and the special items that do things like add regeneration or increase the rate at which your ki recharges have their own values. To increase the maximum for each character, you can spend a number of Z-Points, and the upgrade cost increases as you add more and more points. Characters that have improved attributes can only be used in certain modes, however, so it sometimes feels a little limiting.

The audio of the game isn't superb, but it does the job. You're able to switch between both Japanese and English voices, so whichever you prefer is available. The musical tunes from the Japanese version, however, are missing, leaving generic tunes in their place. While this shouldn't be enough to turn someone away from the game, it's possible to irritate others, especially diehard fans of the series (both video game and anime).

When it comes down to it, Budokai Tenkaichi 3 continues the series' tradition of creating true-to-the-anime experiences. The intense battles that characterize the show are the focus of the game, creating satisfying combat where you string together powerful attacks, combos, dodges, and counters culminating with an explosive ki-blast to finish it all off. The learning curve it pretty steep, which will turn a lot of people off from the title, and there's no doubt that only fans of the show will truly enjoy the game. Regardless, the experience is hard to match, and for any it's a great fighting game to play.