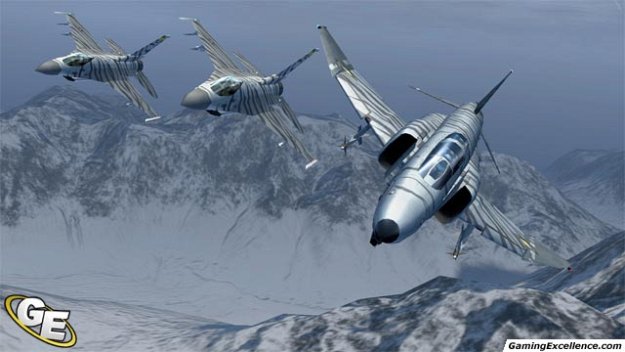 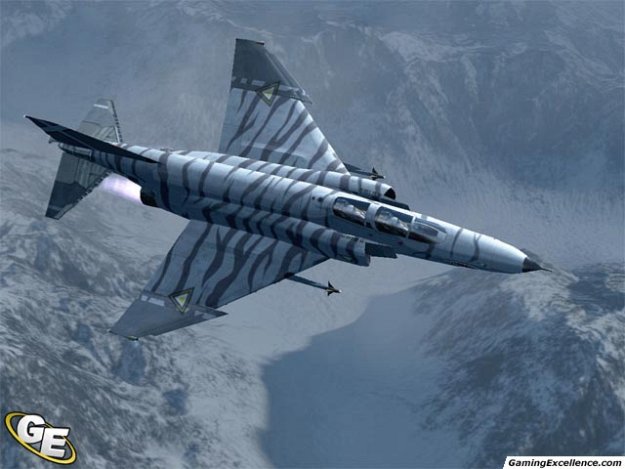 Ace Combat Zero: The Belkan War is the latest entry into Namco's long-running franchise, and the follow-up to the 2004 release, Ace Combat 5: The Unsung War. The game takes place a decade prior to the previous release, and offers up the brand of gameplay that the franchise is known for.

Immediately upon starting Ace Combat Zero: The Belkan War, I found myself cursing the superfluous game setup screens and lousy interface, not a great start. You're initially given an overly confusing menu that is intended to allow players to plot their attack. At the start, the game only allows a choice of three aircraft. Although more are unlocked as the game progresses, the starting roster is a bit limited. Even while flying various aircraft I never got the sense that one felt any different than the other. Half of the time I just stuck with the plane I was using from the start. The point is that I had been in setup screens for an abnormally long time before the unnecessarily philosophical and long-winded cut scenes kicked in adding to the boredom. The storyline of the game feels like a half-hearted attempt at being cerebral and deep, like a lot of war-themed games, but it fails due to it's very canned and cheesy attempts at drama, and long cryptic monologues that seem out of place in a game that's supposed to be about flying around in a jet shooting stuff. Being relatively unfamiliar with the past incarnations in the Ace Combat series, I will say that it almost seems as if the subject matter of the game is outclassed by the narrative and storyline of the game, which ultimately impacts the game as whole negatively. Overall it just seems like the writers are attempting to elevate the storyline to the level of something along the lines of the Metal Gear games, but they have fallen far short.

I really had a hard time getting comfortable with playing even the early levels of The Belkan War because the grainy low-res graphics, combined with the relatively short draw distance of the game made it difficult to engage the enemy. Textures for hills and the ground were quite blurry, and any enemies at a distance would generally materialize out of thin air. When you're at considerable distance it all just looks like a screen full of digital M&M's due to the fact that the game color codes all potential targets differently based on classifications. I couldn't tell if I had a windmill with civilians or enemy weapons, or a tank or tree in my sight; all I knew is that when my "target container" glowed red, I would launch a barrage of missiles until the writing on the screen would say destroyed and move on the next blurry digital blob. Cut-scenes fared a little better, although they still felt kind of washed out. My overall impression of the visuals is that most of the game looked like a PlayStation 2 launch title, while the ground textures were more like something you'd find on the original PlayStation.

Most of the sounds for missiles, gunfire and explosions seemed appropriate, although the machine gun seemed to be a little weak in this area. At certain points in each mission, generally when you would engage the enemy, the music would pick up pace as if to raise the tension before battle. This was a nice touch, but quickly became repetitive when forced to replay the same missing time and time again. The voice of my wingman, who by the way, was no help in actually covering me (more on that in a bit), was quite frequently reminding me that some bogey he was supposed to be neutralizing had me in missile lock. Attempting evasive maneuvers to get out of missile lock while your wingman is repeatedly commenting that you should "watch your back" makes the whole experience more annoying rather than immersive, which I'm sure wasn't the intent.

Unfortunately, I found myself only able to handle short bursts of Ace Combat Zero: The Belkan War, due to the repetitive and monotonous aspects of the game. There is just little incentive to keep playing. The game isn't very realistic, nor does it conjure a real sense of speed; it just becomes an exercise in trial and error. Worse yet is that the completion of a mission is an anti-climactic experience due to the fact that the game really does nothing to signify this, other than moving the story forward.

What was really frustrating was trying to use the command feature that was mapped to the directional button. During the first mission, I almost gave up playing the game altogether because my wingman would refuse to cover me despite the fact that I continued to enter this command on the directional pad. Good Ol' Pixie was really adept at telling me the guy he was trying to shoot down had missile lock on me, which should have been my first sign. If an enemy who is in the midst of a dogfight with your wingman feels comfortable enough to put you in missile lock time and time again, you might want to think about a better wingman. Unfortunately, I could not fire mine. The allied and enemy AI is quite suspect at times to say the least.

Lastly is the scoring system used in the game, dubbed Ace Style, that levies a classification of Mercenary, Soldier or Knight based on how a player chooses to act in the campaign mode. It seems that the story branches differently based on your behavior as a pilot; destroying a critically wounded plane that is already going to crash will have a negative affect on your Ace Style. I didn't spend a lot of time trying to figure out the significance of this scoring system, because the game makes clear in the early going that none is any worse than the other. Overall, there seemed to be a couple of gimmicky features to the game that may or may not have had a meaningful affect on the direction of the story. I cared less for the gameplay than the story, but that's not even saying much for the story.

Fans of Ace Combat Zero may find this is a riveting addition to the franchise. However, players not familiar with the series may want to rent this one and try it out before purchasing. The gameplay in The Belkan War just doesn't live up to the promise of its ambitious and sometimes overly complex storyline, and as a result, the experience falls flat.