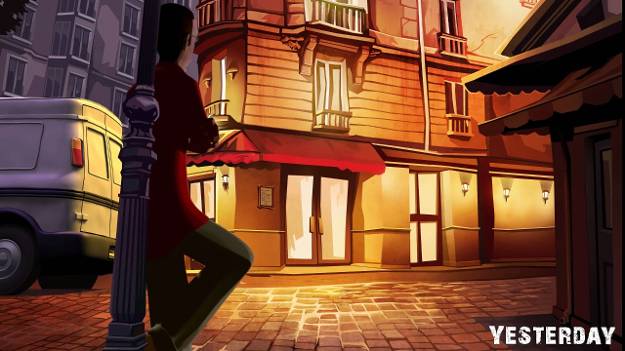 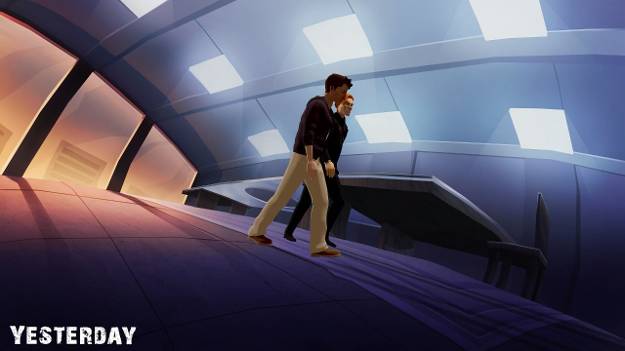 Yesterday is a point and click style adventure game from Spain based developer Pendulo Studios. While the company has delivered several other games such as the Runaway trilogy, they've usually focused on more comedic type games. Yesterday is a very different beast, featuring a dark, gritty story filled with mystery and death.

The plot of the story is enough to catch your interest just by itself; beggars in New York have been disappearing and showing up as burnt corpses, while a strange 'Y' shaped symbol appears without explanation in the hands of random people. Somehow these two things are connected yet no one is paying attention to these developments, save for the main characters of the game. Players go through the story, switching between three different characters at certain points in the game. You play Henry White, a do-gooder from a charity as well as his friend and fellow do-gooder Cooper. The third character is the eponymously named John Yesterday, a character we know nothing about to start with because his memory is gone.

Playing through a level in Yesterday was an enjoyable experience; it has so many traditional elements of point and click adventures, yet slips in a few changes to make the game more accessible to players. The character is moved around the screen by clicking on the appropriate section of the screen; however, characters don't actually have to do too much moving to interact with their environments. There are specific hotspots that the character can interact with; these are really the only points of interest for your character to move to. Once a hotspot has been clicked on, the character moves to it for interaction purposes. The player gets a close up of the area in question, with the option to get more information or to grab, interact or use whatever is there as appropriate. One of the nice things about the controls in Yesterday is that the character doesn't ponderously move across the screen every time you click for them to check another hot spot. They actually fade slightly from view, reappearing next to the area they're exploring. This saves time and helps move the game along.

In true point and click fashion, characters pick up and use objects in their environment to solve puzzles and progress through the storyline. Objects are dragged over each other in the inventory to combine or use, or out of the inventory and moved over hot spots in order to solve problems in the environment. Unlike in many point and clicks, however, Yesterday doesn't necessarily require the player to go through every single step in order to complete a puzzle. For instance, when duct taping a phone receiver to a broken phone, the only thing I needed to do was drag the phone receiver over the broken phone. The game recognized that I had the duct tape in my inventory and used it for me. Likewise, when using an object to get a coin stuck out of a vending machine, it automatically put the coin into my inventory where I needed it, without requiring me to click on the machine to retrieve it again.

Another few other interesting additions to the traditional point and click interface are the hint system and hotspot indicator. In order to help players, with one button press you can momentarily highlight all the hot spots on the screen so you know exactly what areas you can interact with. The very fact that their location is pointed out spares a player the tedium of moving the pointer all over the screen in order to find them. Likewise, if a player is stuck and unsure of what to do next, the hint button gives a pretty good clue as to what action needs to be taken next in order to progress in the level. And to put some small limit on the hint system, there is a small recharge period before the button can be pressed again.

While playing the preview, I only got the smallest hint of the story in the game, but it was intriguing. Insane people, dead bodies and mystical rituals (or the hint of) always do a lot to peak interest. Throw in the odd bit of dark humor and Yesterday seems like it could provide some amusing entertainment. Of course most of the game's story remains to be revealed, but suffice it to say that things are not normal in the world of Yesterday. One thing to keep in mind for players looking for more of a challenge is that because of the way the game is set up it is impossible to fail and die. When I got to a certain point in the story where I was given several dialogue options, all options lead to the same conclusion, it was just a matter of the specific responses given to my answers. Also, when given a multiple choice puzzle to complete, I was guaranteed to eventually succeed. When a wrong answer was selected, the game simply explained why it was wrong and told me to pick again.

Because answering the question correctly was critical to the game proceeding, it did not allow me to get it wrong. For some players, the inability to fail may seem like a cheap cop out; however keep in mind that the player still needs to figure out the puzzles in order to get to those plot critical points in the first place. And while the hints may help, they don't solve the puzzles for you. The game is billed as having four distinctly different endings, so it will be interesting to see what actions the players have to take in order to trigger the different endings for the game.

The art style for the game looks pretty good as well, with very smooth animation on the characters. Done in a slightly stylized cartoon style, it's fairly jarring to see what could almost be a Saturday morning cartoon shooting a gun at someone's face. The game environment was appropriate to the general mood of the story as well; the level I played was in a dismal, graffiti filled subway tunnel. The game is supposed to take place over several different countries and environments such as the snowy peaks of Tibet; it will be nice to see how they translate those onto the screen. There was very limited sound seeing as how the version I played was a work in progress, but the finished game is supposed to have voice acting and a spectacular soundtrack. I will say that the sound bites and background music I heard while playing was very well done and promises a rich and well fleshed out environment.

While I didn't get to sample much I'm excited for the full release on PC. It seems like Yesterday will have an interesting and immersive storyline with intriguing characters. I'm already eager to get my hands on the full game and explore for the complete story behind what's going on. And I have to say that I love the point and click interface and don't get to see enough games utilizing it. Added to that is the fact that this game handles it in an excellent fashion; removing tedious movements and adding in some features to make the game more accessible to players. Look for Yesterday sometime in 2012, but if you want more info on the game now, visit the official website at www.yesterday-game.com .