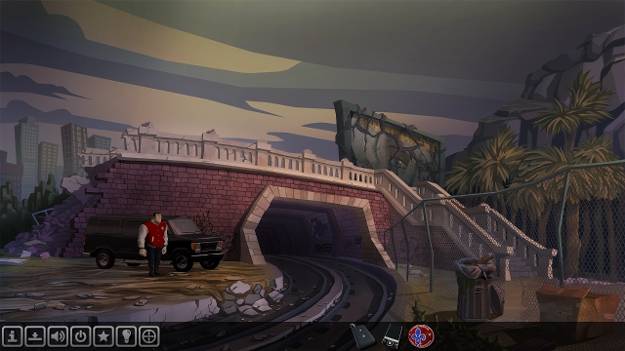 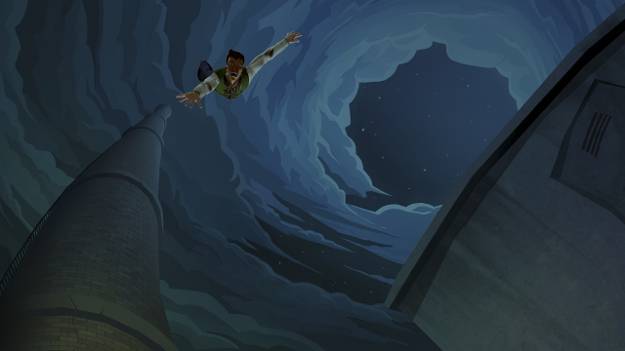 Yesterday is the newest point and click adventure from Pendulo Studios, creators of the Runaway series. Advertised as a departure from their more humorous game style, Yesterday features a dark and macabre story as its backdrop. You play John Yesterday, Henry White and Samuel Cooper, all characters with a part to play in this bizarre and twisted story of the occult. Beggars have been disappearing and showing up as burnt corpses. No one knows what's happening or why. And somehow connected to these killings is John Yesterday, a man with no past that he can remember.

When previewed, one of the things noted about the game was the ease of the control scheme. That has stayed with the game to the final release, creating an extraordinarily easy system to control the characters as they go through the story. Instead of having to manually move characters around the screen to pick up or interact with every single object, areas that can be interacted with in some way are marked by 'hot spots'. Just clicking on one of these hot spots will enable the player to either pick up what they need or use objects as necessary to advance the storyline. A built in hot spot detector makes it even easier, pointing out all the areas on the screen that can be accessed.

And because of the games hint system, whenever you're stuck you can click on the icon and a clue will pop up to help you progress. The few times I found myself being a little stuck, the hints really helped show me the right direction to go into in order to continue playing the game. I found myself relying upon the hint system very rarely; even when I did, it still gives a bit of a challenge by putting in a cool down period before it could be used again. Between this system and the hot spot finder, Yesterday is one of those point and click adventures that most people should be able to finish with no problem. Any point and click player can think back to the days when their next move was about as obscure as a pulley in a rubber chicken. For some it may mean the game is a bit simplistic, but for the most part I saw it as making the game more accessible to all players.

But beyond simple gameplay mechanics, Yesterday offers a rich and interesting story for the players. Multiple dialogue options give you the ability to immerse yourself in the story as you talk to characters and find out the information they have to give you; all of it bringing you closer to figuring out the full mystery behind the game. Make no mistake; while some of the plot points are more along the lines of, "I thought that's what was going on," the game offers more than enough detail and elaboration to keep the story interesting through any obvious directions it may take. And the ease of the gameplay means that you'll be able to get through it and discover the rest of the story no problem.

The animation style and voice acting is well done as well; the stylized art style fit the mood of the game well. The sharp, angular features of some of the characters helped contribute to a more serious vibe in the game. It's a slight difference over the artwork used in the Runaway games, but it gives everything a slightly more dramatic feel. It means that when you hear the characters talking about torture, you can really believe they're capable of it. The voice actors seemed really involved in the characters they were portraying as well, meaning that I didn't see any wooden acting or hear anyone that sounded bored. That's always a huge plus as well. In any game where the characters speak, having people who are actually invested in the portrayal of their characters is vital to keeping the player involved in the story.

Yesterday has a few problems worth noting, however. There is no traditional save system for the game, meaning that when you have to shut off the game, you simply choose the option to exit. The game saves your current progress and picks back up where you left off. This wouldn't normally create too much difficulty because of the game's linear nature, but it does mean that players will have some difficulty when it comes time to get to the multiple endings in the game. There are four advertised endings; three being very easy to see and one being a bit harder to get to. In order for the player to see them, they have to make their way all the way through the game. And because you can't really create multiple saves, you may find yourself having to completely restart the game to get to another ending, or be very careful about the point you exit your current save. In any case, you will have to play through a bit of the game in order to get to the next ending again.

There are multiple profiles to allow several people to play and keep different levels of progress in the game, but players can't specifically choose to save the game at a certain point and go back to that point to replay. Players are able, however, to replay any cinema that they've seen in game, which cuts down on some of this frustration. For instance, you don't have to save right before a big dramatic cut scene; you can go into your videos menu later if you want to show it off to your friends.

But the biggest major problem with Yesterday is length. The game is incredibly enjoyable to play and I had a really fun time discovering what was actually going on. Solving puzzles was fun and the game's multiple flashbacks to reveal more information was enjoyable as well. But it was all over way too soon. I saw down to play the game over the course of two evenings. If I had sat down and played with no interruption, I would have finished in 4-5 hours. What's frustrating about the length of the game is the fact that they built a game world with plenty of opportunity for more puzzles and story. Without giving away any spoilers, the few flashback sequences you get to play could have been greatly expanded and added upon. There could have easily been several more hours' worth of gameplay to sink your teeth into.

As it stands, once the game has been completed and all the endings seen, there is little incentive to go back for more. Here is where the games relative ease becomes a slight detriment. You'll likely remember how to solve many of the puzzles. Coming back to it for a fifth and sixth time for the fun of trying to re solve the puzzles is very unlikely. I have several point and clicks that I have replayed multiple times, because each time I have to work out the puzzles. With a game this short it's harder to have that kind of challenge. It saddens me with Yesterday, because the game has such a rich and vibrant story and characters.

Yesterday was a fun and enjoyable game experience. The characters were well thought out, the story was interesting and the puzzles challenging without being mind numbingly hard. Yet I'm not sure how well the game stands up considering the actual length it takes to finish it. Point and click fans will definitely want to check this game out as it's an excellent addition to the genre. More casual fans may want to take a pass though; it's far too short and doesn't give enough in the way of puzzles to make it really enjoyable for a casual point and clicker.