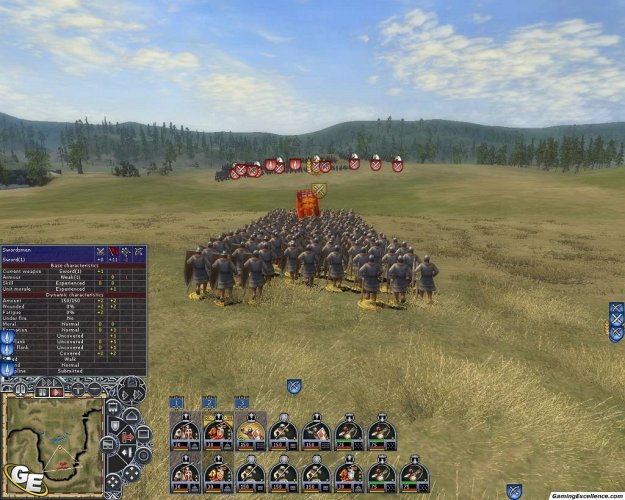 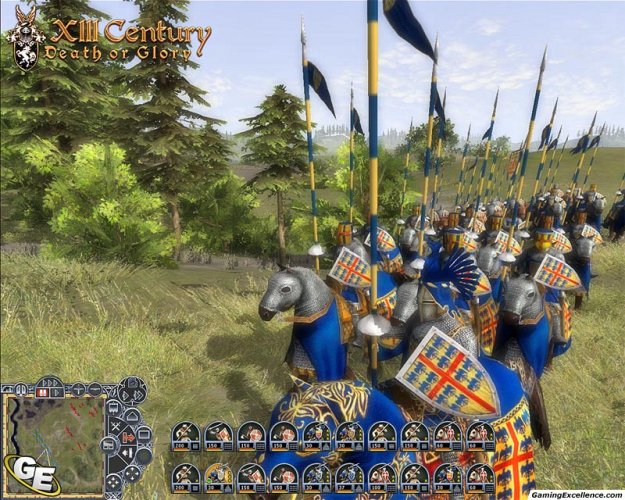 The Middle Ages spanned hundreds of years, and developer Unicorn Games and publishers Atari and 1C have built upon a single century from that era: the thirteenth century. In XIII Century: Death or Glory, the war is on as the English, the French, the Mongols, the Germans and the Russians let the spittle fly and take up arms. These five factions make up the majority of the game, each having been allotted their own campaign composed of five era-specific battles, and they are portrayed in an unbelievably accurate manner. While XIII Century is not as epic as some real-time strategy games, it lays a new egg with its inclusion of many welcome perks.

The most notable of these perks is the sheer amount of units portrayed on the screen at one time, and how bloody brilliant they look standing amongst one another. XIII Century utilizes shader graphics -- and it really shows. Whether troops are marching across detailed stone bridges that span realistic, glinting water, or rushing through the half-submerged trees of a swamp, every visual cue is eye-catching and enjoyable. You may find yourself gazing at a landscape that seems fit for Hollywood, when suddenly you realize your troops are retreating from an enemy that has already decimated half of your reinforcements. These are the sort of environments and character designs that raise the bar for real-time strategy (RTS) games. Even though there is the occasional slowdown during an action that involves large quantities of troop movements or engagements, Unicorn Games has done right by its inclusion of such stunning visuals.

Another aspect of XIII Century that really shines is its historical accuracy. Well-known figures such as Edward I and William Marshal command the sense of the era, and the battles are detailed reenactments down to the landscapes and time of day. As units such as archers, swordsmen, axe-wielders, cavalry and the like do battle, every feature from the clothes they wear to the way they fight feels appropriate for their specified nation. Taking it even further, troops act in realistic ways. If you set them to run great distances, they become fatigued and must rest. If you reverse roles and put archers on the frontlines and keep your pikemen and swordsmen on high ground, the battle will not commence in your favor. These are the aspects necessary for a profound RTS game, and their addition in XIII Century is done masterfully.

Like other titles, XIII Century borrows and utilizes a few staples from the RTS class, and then expands upon them. Units have specified weaknesses and strengths against other types of units, and a simple mouse roll-over portrays a window with these attributes listed. Although the laws governing a successful battle are instantly apparent (archers fight best when set against long-range foes; mounted swordsmen do poorly against defensive foot soldiers) there are other factors that ensure victory or defeat. For example, if a unit gains a bonus from charging the enemy, it might be best to use them as a flanking front due to their speed. Units have very in-depth traits, and although battles can be won by using only the well-known basics, players may choose to study their troops and use every advantage in the book.

XIII Century's main downfall is its lack of epic nature. Sure the battles can go on for hours, and there are hundreds of troops on the screen at any given time, but the campaigns feel short and are not really interconnected. Although completing a campaign and leveling troops rewards bonus battles and other material, the game seems to fall short of portraying an epic struggle throughout the century. The inclusion of the Custom Battle mode is a welcome addition, as it allows you to set up battles and purchase armies with a set amount of money, but it all feels the same after a while. The game also sports a multiplayer function, but it requires a direct IP connection and, therefore, makes having a XIII Century-playing friend a must. There is speculation of a patch due to be released by the game's design team to solve this, and if it happens, it has a good chance of drawing many players from across the globe.

All in all, XIII Century: Death or Glory is a must for the real-time strategy enthusiast. There is nothing in the gameplay that will disappoint, and fans of the genre can rest assured that the visuals and effects do the title justice. Once you have gone through the campaign missions, designed a few custom battles and enjoyed the bonus material, all that is left to do is hope for a XIV Century.