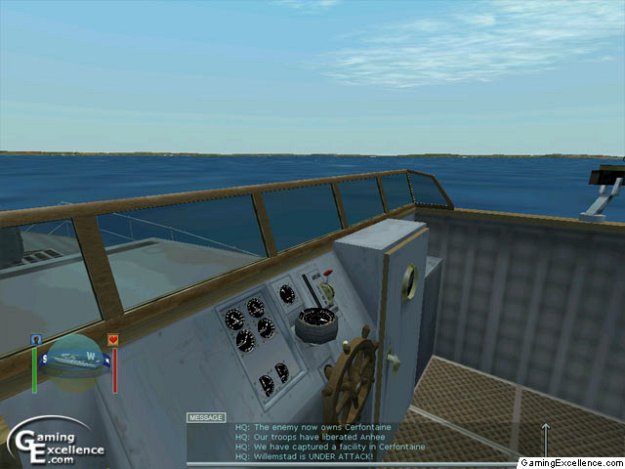 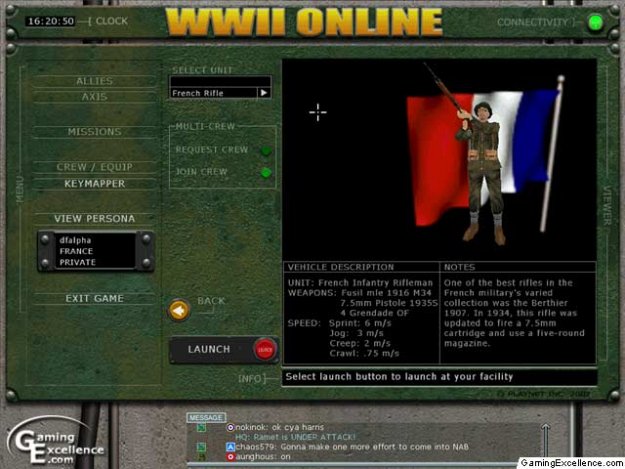 There is little doubt that World War II Online was released before it was complete last June, missing and incomplete features, limited vehicles and unit support, and horribly laggy and resource intensive gameplay were just the start of the list of problems. Anyone who has followed World War II Online as it has developed over the last year undoubtedly knows the amount of work that Cornered Rat Software has done to improve the title, those who haven't may just be in for a surprise.

For anyone unfamiliar with the title, World War II Online is a massively multiplayer game developed by Cornered Rat Software and published by Strategy First. Online services are provided in partnership with Playnet who handle monthly billing of the title. The monthly charge to play the game is in the range of $10.00 USD, similar to that of most massively multiplayer titles. World War II Online is exactly what one would expect, an online simulation of the Second World War heading players in combat on either side of the battlefield. Whether you want to take to the skies or engage enemy forces from the ground, players have a lot of freedom in what they wish to achieve in the game. Not only that, but the ability to compete in such a variety of situations and modes of combat will appeal to a large crowd, whether it is the flight enthusiast or those who thoroughly enjoy a good first person shooter.

The initial launch of World War II Online left much to be desired, many features were unaccounted for and those that were included didn't work correctly or were incomplete. The game was extremely limited and frustrating, right out of the box the game required more than one hundred megabytes of patches before you could even get online. Although the company offered several free months of play to those who purchased the title, these lost attributes upon launch surely turned off many potential supporters of the game. It is one year after this initial launch, and Strategy First has released an updated retail version of the software, this version contains several bonus items in the package that are exclusive to the Reader's Choice Edition. Among these bonus items are a large foldout wall map of the battlefield, the official music track, and 20 original illustrations and wallpapers inspired by the game.

The primary question on anyone who witnessed the initial launch of the title is what has changed? For starters, World War II Online contains a completely redeveloped and more initiative user interface, a vast improvement from the original lackluster and dull interface. Loading times have been dramatically improved, as have the various crash bugs upon first release. Nearly all of the major problems have been addressed by Cornered Rat Software, something that shows their willingness to continue to support and improve upon this title. Among these improvements comes a wide variety of new vehicles, scoring system, and enhanced and optimized graphics engine all to be discussed in detail later in this review. The keymapper has been enhanced but unfortunately, is still unnecessarily complex and needs to be simplified, as resetting keys is a time consuming operation.

World War II Online was promised to have the ability to support a single persistent world, unfortunately this was not possible upon the titles release and multiple servers were setup. Throughout the course of the ongoing development of the title, this goal has finally been achieved and a single persistent world is in place supporting thousands of players at a single time. Modeled in a one-half scale of Europe, World War II Online is accurately mapped as best could be expected. The theatre map has been much improved since the inception of the game, players can search for a specific city, and each location has icons presenting any special attributes it may have. For example, a city with an airport will display an aircraft symbol next to itself on the map. Along with these changes, a city in which a battle is insuring is displayed with a battle icon, allowing players to quickly step into the action.

Units and methods of combat have been a never-ending area of World War II Online, it seems new units are being introduced every week or so. Units are primarily divided into three categories, land, air, and sea. A variety of different aircraft are available for combat on both the Allied and Axis sides, everything from the Hurricane combat fighter to the popular Stuka bomber. Anti-aircraft guns are perfect for taking out those pesky air targets, tanks are also well suited for this purpose. Every aspect of combat is required for success, truck drivers are needed to carry soldiers to the front lines and haul anti-tank guns across the battlefield. Ground soldiers are needed to fend off and engage in attacks, while tanks are needed to provide backup and much needed heavy artillery support. Without a combined effort, any attempt at penetrating enemy defenses is meaningless, and this aspect of teamwork is what ties the competitors of World War II online together into a successful community. At the current time, the sea aspect of World War II Online is extremely limited, but it can be expected new ships will be available at the war progresses.

Among the large number of improvements made, the optimization and graphical enhancements top the list. Aircraft gauges and cockpit controls are now fully functional, something that was not true when the title was first released. Another problem with the initial version of the game was the poor optimization and horrible performance problems, even the most powerful systems struggled in certain aspects, most notably air combat. The most recent versions of World War II Online still require high system requirements for optimal performance, but the general optimization has improved much since the initial launch of the game. Graphical models have improved as well, the visual glitches have notably disappeared and a variety of new options have been added such as the ability to destroy targets and objects such as buildings. Complete day and night cycles are a realistic asset to the title, however they can become tedious, as night raids are extremely difficult to carryout. Flying at night can offer a challenge unless you are an expert pilot and know the terrain, however it is similar to what was experienced by the soldiers in the war and players will eventually adapt to night combat through experience.

World War II Online leads players through the path of career advancement the same way that most role-playing games do. As a player becomes more experienced, the rank and position increase over time allowing more useful and powerful units as well as a variety of other features. Daily statistics are displayed on the official World War II Online website, the theatre map and battle casualties are updated every five minutes. These enhancements greatly improve the overall experience of World War II Online, and only further additions to the title can be expected by the developer in the future.

Much has changed and been improved upon since the initial launch of World War II Online, and the title continues to be worked on every day. To say the least I have been very pleased with the progress of the title, for any game to come this far is astounding and truly a testament to the development team. Would I recommend World War II Online? One year ago I would have said absolutely not, but now I would have no problem recommending it to others. If you are at all interested in the Second World War, then World War II Online is about as close as you can get to the past.