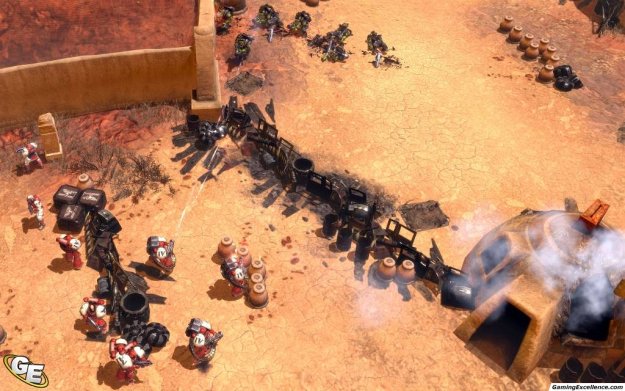 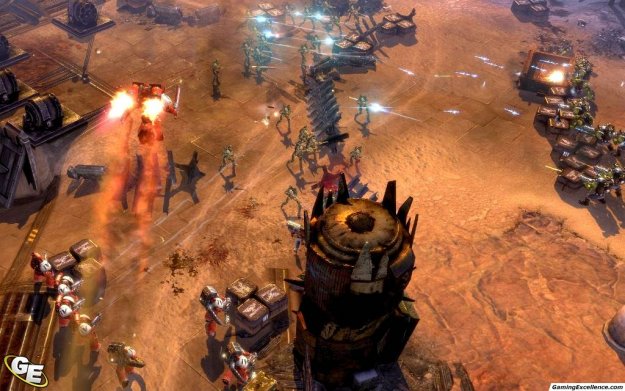 There are games that do nothing to stand out the genre, except maybe put on a fresh coat of paint and call it a day. Many sequels do just that, then stick a big ol' number '2' at the end of the title. Then there are games like Warhammer 40K: Dawn of War II, which completely reinvents itself in nearly every way, and does a pretty good job at it too.

The single player game, where much of the change resides, is certainly an interesting experience. It's probably also incorrect to call it a real-time strategy game, in the traditional sense anyway. You control a small group of 'hero' characters, each with a small squad of soldiers following them (except for your main character, who is all by his lonesome). You'll take this group of heroes through numerous missions, fighting your way through Orks, Tyranids, and Eldar, all in the name of the Emperor. There's no base building, no unit construction, no resource management--nothing of traditional RTS games. You can capture certain structures, both to strengthen your position in the area and to allow you to reinforce any squads that have dwindled away, but that's all.

After each mission, you're given a lay of the land showing your next possible deployment locations. Things start out pretty simply, with just one mission available in each day of game time, but as the campaign ramps up, you'll find yourself deciding whether to defend a number of normal locations, or a key outpost, or whether to continue the campaign's story, or simply take another piece of land for the strategic advantage it might offer. The story of the game is nothing much more than an excuse to get the four races together and beat the snot out of each other. There are also times when the gameplay can get quite repetitive: you'll be seeing a lot of the same maps over and over again, and though the circumstances and enemies may be different, it can feel like you're repeating the same actions, as well.

Also on this screen is where the heavy role-playing elements of Dawn of War II come into play. Here, you're able to equip the fallen 'wargear' (a.k.a., loot) found on the battlefield, which can change the way your troops fight far beyond just adding +1 damage. Effects range from changing how effective your squad is against different groups of enemies to granting various special attacks, like using jump-jets to call the fires of hell down upon your enemies.

But still we're not done with this screen. Here, too, can you apply the experience points that your units have earned through battle. There are four areas--Ranged, Melee, Health, and Energy--that you can level up. If you divest enough points into particular areas, you'll be able to learn special abilities, like allowing your commander to equip heavy weapons, or increasing the range of your heavy weapons team. You can't max out your stats, so you have to think strategically about how to develop your team.

Although it may seem more RPG and less RTS, strategy does come into play in the campaign, just not as often as the previous games. If you do want your fill of RTS action, that's where the multiplayer game comes in. This mode is what fans of the previous Dawn of War will be most familiar with, though it's quite different this time. You still have resource points to capture and victory points to defend, but you only have one building from which to produce units, and no others to build. Like Company of Heroes, it puts a lot more emphasis on small-scale battles between groups of units, and because there's no need to worry about building expansions and extra bases, you'll be focusing a lot more on the conflicts that are occurring everywhere on the map. It produces quite the visceral experience, especially with the excellent graphics and animations that give every detail of the action.

The graphics and audio of the game do an excellent job of standing out from the crowd. The visuals are polished and sharp; zooming all the way into the battlefield means seeing every detail on every unit as they tear each other apart. The sound is the same way, and aside from the explosions, gun fire, and sound of chainsaws cutting through bugs, each unit has a huge number of sound bites, everything from spotting an enemy to being shot at, or to retreating, at any given moment you'll be able to tell what your units are doing by what they're telling you.

In all, the package of DoW2 is excellently done. The single-player campaign is unique and can be played with a friend though co-op (though the Windows Live implementation makes things a little tough to get started). When this gets a little tiring, there's the fast-paced multiplayer mode. At the moment there are only 1v1 and 3v3 maps to play on, but things promise to get a little varied in the future. So while you may be thinking that this is little more than Company of Heroes in Space or just a simple update of the original Dawn of War, that couldn't be farther from the truth. Dawn of War II is a brand new, well-made experience that's worth more than a look.