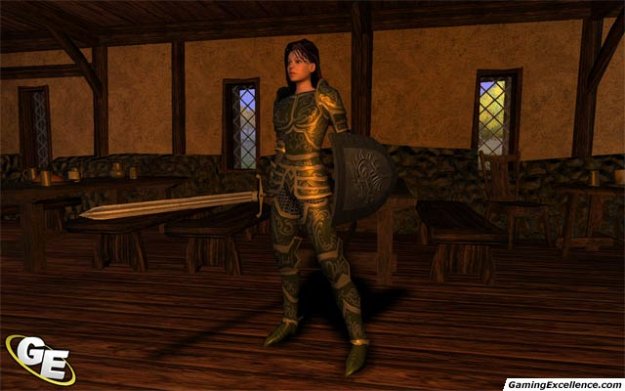 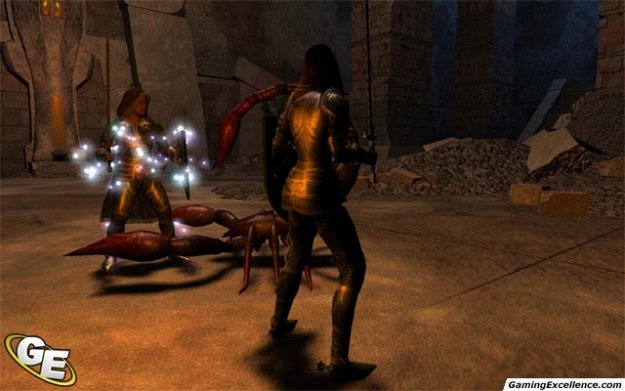 This year's E3 seemed to mark the year of the MMO; there was probably the largest collection I've ever seen on display, all types from the classic fantasy-based game to more realistic shooter-based offerings. It's not surprising that so many companies are competing for this large market where most games generate a monthly user subscription and the hit titles amass a large, dedicated fan base, what is surprising is the innovation we are now seeing in the gameplay of these titles. Before, the genre was smaller and consisted of few games that played essentially the same. Now, we are seeing vast changes that should positively affect our gaming experience for years to come.

So where does Vanguard fit into this picture and what does it have to offer? Well, the gameplay follows more closely that of the classic MMORPG genre, with a few major differences. The focus however, is more towards creating a realistic world than a fantasy-based one. For those comparing, and I do make this comparison in a broad sense, think more along the lines of Guild Wars as opposed to EverQuest or World of Warcraft.

Vanguard takes place in the war-torn world of Telon, which consists of two large continents. Upon entering the world, players have the option of choosing between nineteen different races for creating their character, including Orcs, Goblins, Dwarves and Elves; fifteen different classes, which include the common Paladin, Ranger, Sorcerer and Rogue, as well as the less common Psionicist and Bard. Standard trade skills are available, as are mounts. However, instead of only having one mount, players will be able to collect dozens, all with unique attributes and purposes.

Aside from the standard MMO features, Saga of Heroes attempts to break away from the pack by offering gamers a more social gameplay experience. This is done by promoting group play early on, within the first five levels or so as a matter of fact. Groups of players will always be better rewarded with items and experience from dungeons, which are designed to be extremely difficult (if not impossible) to play solo. Now, if you don't have a large group of friends to play with, or cannot find a suitable group, don't despair. There is content in this game for groups of all sizes, from large to small, as well as solo content to complete so that players will never have to wait idly for their raid group to form.

Another clear difference between Vanguard and most other games in the genre is that this game has absolutely no instance dungeons whatsoever. I'll give you time to recover from that statement. Alright? So, since the designers felt that instancing limits social interaction, which I do believe is true since it usually is done in the same group at all times, they have decided to forgo this aspect and focus elsewhere. Another negative for this type of content was that in an instance dungeon, players never have the chance of a random group coming by and saving them from a difficult enemy.

Fair enough I decided, so what would replace this fundamental aspect of most recent MMOs? Well, this is where the designers really displayed some innovation; they have come up with a concept called "encounter realms", which are basically open instances. The way this system works is that a group of players start down a path towards an in-game quest or boss. Along their way, they perform certain actions, which are required in order to meet the end goal. Since all of this happens in the open world, once this group reaches the goal, it belongs to them, regardless of any other players waiting at the end for the boss to spawn or treasure to appear. Only those that have completed the requirements along the path can claim the prize. This system works to promote the social aspect that Sigil Games is going for; along the way, if this group gets ambushed somehow, any other group that happens to be in the area can lend a hand.

I could go on and on about Vanguard and the differences between this game and others. The basic summary though, is that this game is more similar to Guild Wars than other MMOs, but it still strives to be unique in many ways. From the situational items to the focus on group combat from the start, the game promotes social interaction between the casual gamer and hardcore gamer alike. Sigil Games Online will be co-publishing Vanguard: Saga of Heroes with Sony Online Entertainment when it releases sometime Winter 2006.