Vanguard: Saga of Heroes is a massively multiplayer game developed by Sigil Games for the PC. The game was released in Q4 2006.

This year's E3 seemed to mark the year of the MMO; there was probably the largest collection I've ever seen on display, all types from the classic fantasy-based game to more realistic shooter-based offerings. It's not surprising that so many companies are competing for this large market where most games generate a monthly user subscription and the hit titles amass a large, dedicated fan base, what is surprising is the innovation we are now seeing in the gameplay of these titles. Read More. 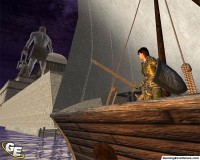