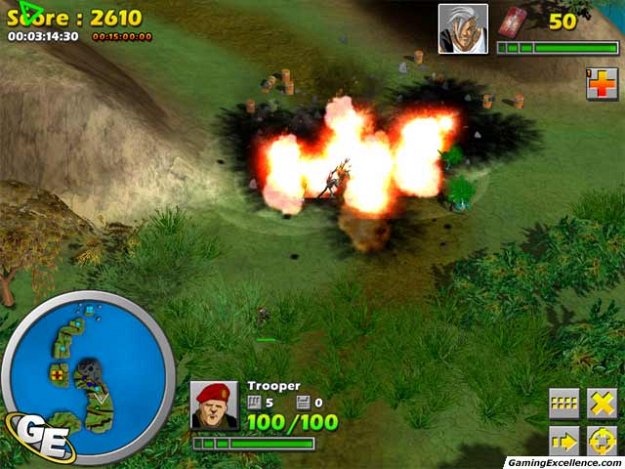 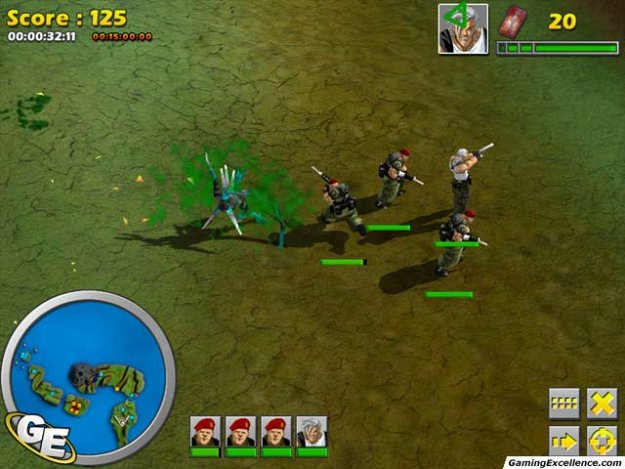 Welcome to the gladiatorial arena, you are Major Greg Callahan, an ex-soldier launched into space to investigate a suspicious black hole. In an instant, you are sucked into this vortex and fall unconscious. Upon waking, you find yourself on a mysterious alien planet, forced to fight against reigning champion Maximix in a gladiatorial arena to survive. Although the storyline is a little weak, it is far from where the Gladiators excels, something gamers will not likely take into account. It is a shame that the cut scenes that direct the storyline are so horrible, although a comic book style is intended; the animation is far from fluent and greatly takes away from the overall presentation of the title.

Published by Arxel Tribe and developed by Eugen Systems, The Gladiators: Galactic Circus Games is one of the first large scale titles from Arxel Tribe for the North American market. The than others in the genre, although there are plenty of guns and explosions, the Gladiators does not rely on your building skills to develop a fortification and manage resources, its simply point and shoot. Players are required to use tactical strategy in battle and defeat seemingly endless waves of enemy troops to succeed, not an easy task to say the least but a solid concept to build on.

The Gladiators features several different modes of play, three single player campaigns each containing six missions. Also included is a multiplayer mode for up to sixteen players simultaneously over an Internet connection or local area network. Each campaign contains a different set of units for battle; first we have the human race, secondly General Maximix's magnificent army, and finally the troops of Fargass. The units in each of these sets provides enough individuality and specializations to fit nearly and type of battle, troopers, commandos, and even attack helicopters are just a few of the units in the title, easy to manage yet difficult to master.

Gameplay wise, the Gladiators is very simplistic, such that even the most inexperienced gamer can easily get a handle on the controls. The point and click model used to attack enemies and blow stuff up is quite nice. Although the title is easy to step into, it is very difficult to master as strategy is a critical element for success, simply outgunning your opponents will rarely produce positive results without massive casualties. You begin by commanding a small band of human units through the deadly battlegrounds, attacked by waves of enemy units and forced to fight to survive. Unlike most strategy titles, resource management is not an issue in the Gladiators, players simply need to worry about collecting "joker" cards and powerups to replenish and create new troops for battle.

Graphically, The Gladiators is well developed in completely three-dimensional space; gunfire and the fast pace of the title fit the aesthetics perfectly. Environments and objects are quite detailed, large-scale battles look impressive to say the least. Although the buildings themselves look very detailed, these structures are a rare find and aren't overly common in the environments. As the title is modeled in a completely three dimensional space, players can zoom in and rotate the camera 360 degrees around the units, an impressive addition that makes for some interesting battle scenes.

The soundtrack included in The Gladiators is original and innovative, a credit to the development team. A variety of unique tunes that change based on the tension in the heat of battle, and the accompanying commentary and cheers of the spectators during especially gory moments are superb. Gunfire and explosions are well developed, and add a nice touch to the overall audio aspect of the title.

The Gladiators has its downfalls however, some of which are large issues with the game. As mentioned earlier, the title is very difficult to master, in some circumstances the difficulty level is simply too high. It goes without saying that a title such as the Gladiators is intended to be difficult, however there has to be a limit as some of the levels are near impossible to complete without dedicating many hours to the game. Even on the easiest setting, players may find themselves frustrated at the ridiculous difficulty on certain levels, obviously an oversight by the development team. If you are not a fan of saving and reloading, then the Gladiators is not for you. Often, the best strategy is to learn what to expect from your opponents and develop a plan of attack after scouting the level, then reloading and putting this strategy into action. Another issue that may cause players to look away is the repetitive nature of the game, lead your troops through a world of nasty terrain and blow up seemingly never-ending waves of enemy fighters, sure it is exciting but this initial shock value will quickly wear off.

Although many titles are produced for this extremely popular genre, it is a rare find to come across a really superb title. Although The Gladiators does not exactly fit into this glimmer of excellence, it isn't a horrible title either, as many players will surely enjoy the unique aspects presented. For fans who enjoy the fast paced action based games and blowing a whole load of stuff up, then take to the arenas as The Gladiators is exactly what you are seeking.