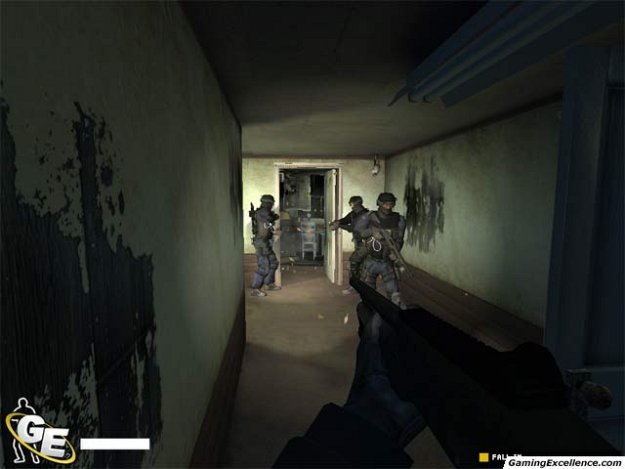 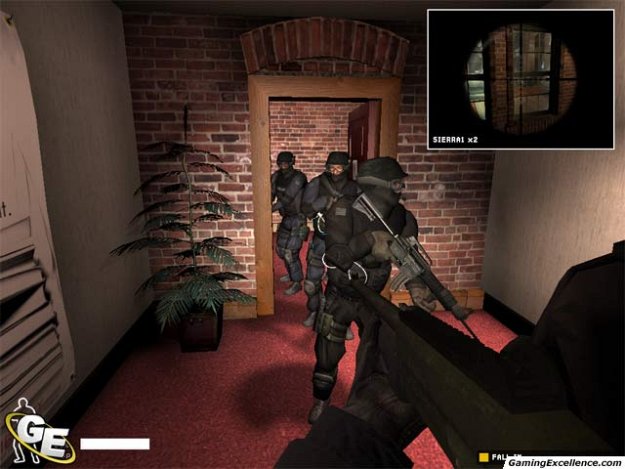 They move as silent as night, and are more deadly than an angry mafia member. SWAT, the Special Weapons and Tactics unit, are some of the most highly trained officers in the world. Developed by Irrational Games and published by Vivendi Universal, SWAT 4 is the latest entry into the longstanding franchise, and it surely doesn't disappoint.

SWAT 4 is one of the most solid tactical shooters out there, but there are some problems. Irrational has developed a game that both veterans and rookies of the genre will enjoy fully if they can overcome a few missteps. You fulfill the role of a commander of a Special Weapons and Tactics unit in a crime filled city. You guide your team through missions that initially seem to be routine high risk police scenarios and eventually end up in missions that would be any cop's nightmare. Sweeping room to room with your squad, blowing through doors and rescuing hostages, the action keeps on coming from all directions at once.

The learning curve can be a bit steep. The tutorial tells you what buttons to push and when, but it's in the mission's you'll be cursing to remember how to switch from commanding red team to blue team. It will also take some time to learn the feel of the weapons. This isn't Counter Strike here, think more to Rainbow Six. The weapons handle heavy and deadly. It's far too easy to just spray and pray at first and hit civilians while completely missing the gun wielding maniac standing in front of you. Taking it slow is a must in this game at first while you learn the ropes. Once the first few missions have you comfortable though the game ramps up the action and you'd better know your stuff before you get into some of the more advanced missions.

The graphics are good with light and shadows all rendered real time. The textures and weapon models are lovingly rendered. The environments all feel very organic as well. The houses and convenience stores you storm all feel real and lived in. The back alleys are littered with junk, and the interiors are filled out realistically too. Some real love went into making this game look as true to life as possible. Even the intro and briefing screens are made to look like a briefing room and a crime scene to add to the feeling of being in an officer's shoes. These aren't advanced graphics by any means though.

The sound is very good in its role of making the game feel realistic. The voice acting of your squad, the briefing, and those you encounter in game is adequate, and the environment's sounds are excellent in making the missions more immersive. Some of the dialog is cliched, but this is a game about police and if there wasn't talk of doughnuts there would be some disappointed gamers out there.

Those police that back you up? Well they're a mixed bag. Most of the time they don't feel like bots. They have personalities and will say more than "aye sir," when you issue a command. They'll pipe in with their own opinions on the events going on around them at scripted times as well. What I liked best about their communicative nature is that they'll tell you when you're in their way or that they're busy on another action when you issue orders. As for issuing orders, it's usually a breeze to navigate through the many options the game provides. There's also a handy picture in picture option for when you want to split your team and keep an eye on both of them. Orders can also be issued through this secondary display, so the whole actions menu is very intuitive and easy to use. It's a point and click interface, and when you tell your team to bang and clear a room, they bang and clear that room real quick.

The bad thing about your team is that they behave like dumb bots. They can get stuck on objects, crowd up in halls, block your way, spray hostages with gunfire, and generally make a mess of things sometimes. The SWAT arsenal is equipped with "less lethal" options other than submachine guns, shotguns, and assault rifles, but the bots never seem to know how or when to use the pepper-ball gun, beanbag shotgun, pepper spray or taser. The bot's strengths lie in their ability of coordinating the assault of rooms. They kick down the door or blow it open with a little C4, toss in some tear gas or a flashbang, and shout, "Police! Hands in the air!" better than any player can. Nothing is more annoying than falling victim to your own ill thrown flashbang. When the bots do enter the room it's your job to follow and bring any non compliant suspects in line and secure any evidence.

That is how the game usually goes. Kick in the door, toss in some gas, and arrest the suspects. It's exciting, but it can get routine, but there are surprises thrown at you, and the time you get cocky and don't bring your team with you is when four gang bangers are waiting in that room to ambush you. The enemy and civilian AI is decent, they act in a realistic manner for the most part, but don't expect it too be too tough. Most bad guys will give up after being tear-gassed and yelled at, and if that doesn't work the taser or a beanbag in the gut will. The game really becomes one of procedure, and you get points deducted from your score if you don't act like police. Didn't tell them to surrender before you shot them? That'll cost you some points. Shot them even after they surrendered? By golly that'll cost you some points. Shot a hostage? Better restart that mission. That is the fun part of the game though, you're forced to think fast sometimes, follow procedure and decide when or when not to shoot. You never know when a mission that seems routine can get crazy. The placement of the enemies and the civilians gets randomized too, so even if you restart the level, you can't be sure where the bad guys will be hiding.

The police gadgets are fun to experiment and play around with. You'll be using the optiwand to look under doors and around corners many times, and watching the effects of the taser is fun too. I must give praises to the less-lethal shotgun, it works wonders in this game. There is no problem a few well placed beanbags can't solve.

The realism aspect is an area where this game doesn't always work. While playing you must suspend your disbelief just a bit more than usual. SWAT 4 tries to act like a police tactical simulation, but I seriously doubt the police would ever send a five man team into a building with a dozen armed and dangerous suspects. The sniper member of your team is also a seldom seen or used. He'll occasionally pipe in to say he's spotted a target in which case you must stop what you're doing and press at least three buttons then click your trigger to take the shot by which time the target has wandered away before you could aim at it.

The multiplayer, both LAN and internet, is a great addition to the game. There's a great variety of maps and game modes to play. There's nothing too new here, but being able to handcuff and enemy player and watch him type to his team for help is a moment all gamers should experience. There's a co-op option too which is a great thing to include in this game since it's all about co-operation and teamwork. Kudos to VU Games for some great multiplayer in this game, it really adds to the replay value. All of the single player equipment is included in multiplayer mode so now you too can experience the business end of a taser or a blast of pepper spray to the face. SWAT 4 may have it's flaws, but it can be a lot of fun too.