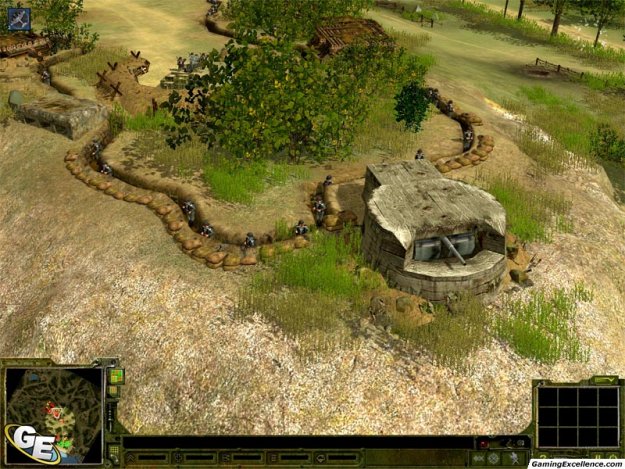 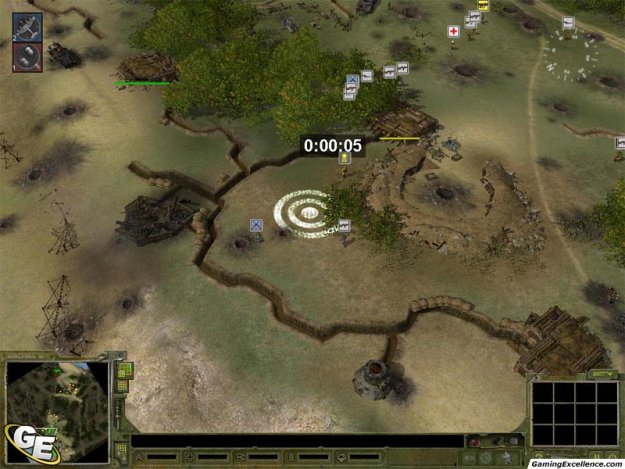 A really good strategy game is not easy to find. Sure, any game can have you build units and send them to die, but making a very good real-time strategy (emphasis on strategy) is not an easy task. Enter Sudden Strike 3, the latest game in the World War II strategy genre. The emphasis in this title is in grand scale and size, but with this comes a bevy of other problems that create problems for those playing.

The single player campaigns of Arms to Victory allow you to experience large-scale battles ripped straight from the Second World War, such as the defence of Iwo Jima as the Japanese or, of course, the infamous D-Day beach landing. These aren't attacks by a couple dozen units, either; there are usually literally hundreds of infantry on screen at a given time, in addition to maybe a couple dozen vehicles. Strategies get pushed to the limit at these numbers, quite often.

The most common unit in your arsenal is infantry, but there are quite a few of them. You've got men armed with rifles, machine guns, bazookas, and more. Special units like officers can use binoculars to see a little deeper into the fog of war, engineers can repair tanks, and medics can heal other troops. Tanks are their usual destructive selves, and can take a fair amount of damage (except from the anti-tank weapons, which tear them right up). None of these units are actually built, you're just provided with a steady stream of units automatically. This makes for some interesting strategy, as you have to make do with what you're given.

There's a lot of interaction between units that isn't normally seen in an RTS: there's the common ability for the medic to heal other units, and the engineers to repair vehicles. But crews are needed to crew tanks and heavy vehicles, vehicles need to be refuelled by fuel trucks, and everyone needs ammo from ammo suppliers. All this is fine and dandy normally, but when you're dealing with as many units as are on the screen at a given time, things tend to become overwhelming quickly. The level of micromanaging required in this game is pretty staggering. There's no way to automate everything, and so if you want to refuel someone, for example, you need to select a refuel vehicle, find a vehicle that requires refuelling, and click on them. When things quiet down, this is fine, but in the middle of combat this is a real problem.

The clunky user interface in this game doesn't make things any better. Though the graphics are pretty good, it's nearly impossible to distinguish what types of soldiers are what without turning on little icons above their heads, and that's just the beginning. Health, ammo, and experience for each unit can't be seen unless the units are actually selected, removing the ability to scan the battlefield for units to refuel or heal (generally, though, considering how quickly infantry can get gunned down, healing doesn't accomplish much in the long run). Even then, each unit has a primary and secondary weapon, health, and experience, and it's pretty hard to differentiate between all of them.

This game emphasizes the 'strategy' in 'real-time strategy'. Running your units forward will get you really dead, really quick, so you have to think about what you're doing. The game provides ways to keep your units safe (or, at least, safer) like trenches and houses to take cover in, and you had better use them; infantry will get cut down quickly if they're not protected. And tanks, though they may be powerful juggernauts that'll shrug off normal infantry fire left and right, a few well-placed bazooka blasts or anti-tank rifle shots will take them out without giving you a chance to blink. In addition, tanks can't see worth squat, so you've got to bring an infantry escort if you want to be able to actually see what you're aiming at.

The game is pretty brutal in terms of difficulty too; when you begin most missions (especially beach landings), you're given so many units to begin with that there's little else you can do besides selecting a large group of random men and vehicles and send them forward, hoping to make some kind of ground. Things quiet down a little once this happens, allowing you to bunker down and developing some real strategies, but things don't get any easier at all. Off-site help like artillery and bombing runs help, but even then, if the enemy has any anti-air, you're in trouble.

The scale of the battles is pretty impressive. The large number of units requires a large battlefield, and Sudden Strike 3 delivers. Battles can take multiple hours to get through, and that's if you know what you're doing. You're often assaulting multiple points at a time from multiple fronts, and keeping tabs on the entire battlefield is all part of the game. Of course, this just adds to the difficulty.

There's some good sound to the game, at least in the effects department. Hearing explosions and gunfire off-screen is good, but the repetitive cries that each of the soldiers give out tend to get repetitive. There's only so many times that I can hear 'It's a trap!' before I start to send my soldiers into them intentionally.

Now there's also a multiplayer mode for those who want to take on their friends, but curiously, there's no computer opponents available. At all. Neither is there a skirmish mode, so if you want to play against the AI, you're stuck in the campaigns.

What Sudden Strike 3: Arms for Victory has is a bevy of strategic options at its disposal. As such, it's really going to appeal to those armchair generals. Unfortunately, its staggering level of required micromanaging and clumsy user interface means it's probably going to appeal to only them. Or those looking for a challenge, anyway. It's a deep strategic experience, and would've been an enjoyable one too, but there're a lot of things that get in the way.