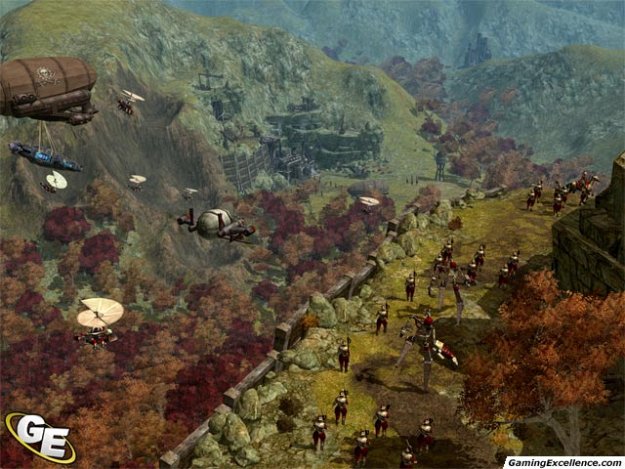 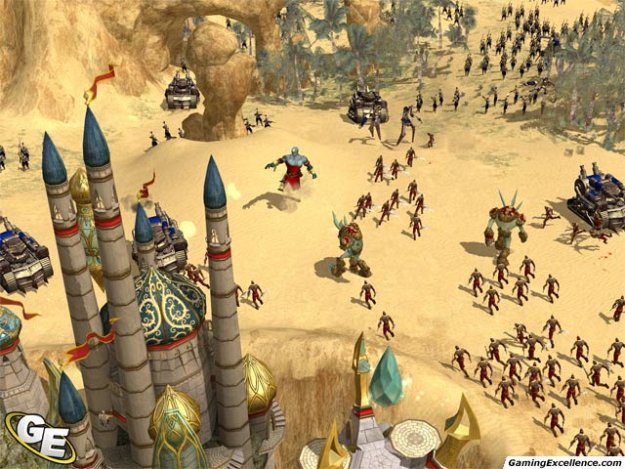 Though a shining example of a real-time strategy game, Big Huge Games' Rise of Nations: Rise of Legends feels less than perfect in the end. Full of promise and interesting ideas it has a few nagging issues that keep it from being a true classic.

Playing Rise of Legends is like meeting an old friend from high school after many years. Cosmetically he's changed, sporting a goatee and a trendy tribal tattoo on a bicep, hip with the times he's also spouting some new ideas about national identity and karmic chi or some such nonsense. But after a couple beers though you can clearly see the old awkward guy you knew from back in the day. Getting lost on the way to the washroom, telling boring stories, and obsessively collecting blue crystals. Much like your old friend, despite the change in appearance over the years and a few new ideas, Rise of Legends is still the same kind of game that's been popular for a decade.

What Rise of Legends is a finely crafted game, gorgeous graphics and mechanically sound. If you only pay attention to how the game plays it is a masterpiece. The whole picture must be considered though and in this work of art.

The game play will feel immediately familiar to those who have played an RTS (real-time strategy) game before. Collect blue crystals, construct a base, build an army, and crush the opposition. There are three different armies to play, and they all play differently, there are also national powers, heroes and super units to experiment with.

The user interface is extremely easy to use and understand. Building, technology, diplomacy, and your hero units are but a mouse click away. Resource collection is also painless, just build a resource collector and he'll go about his business in a logical way. The units themselves can usually find the correct path to reach a destination. Flying units can be a hassle to control however; as they fly almost too high and selecting fliers hovering above ground forces requires you to slide your screen upwards.

In the single player campaign you play as Giacomo, an inventor from the lands of the Vinci. As their name suggests they have a renaissance style to their units inspired by the designs of Leonardo Davinci. While they have a standard infantry unit, the Vinci also boast clockwork robots, steam driven tanks, and whirlybird fliers.

As the campaign progresses you are introduced to the Alin, desert dwellers that use magic and fantastic creatures like dragons, crystalline giants, and genies to defeat their enemies. Pure Arabian Nights. Finally you encounter the unpronounceable Cuotl, who are like Aztecs with futuristic technology, almost like that movie Stargate.

Each faction is totally unique visually, and has several unique units of its own along with common types of units that are shared between the factions, like a basic swarm infantry, artillery, and all-purpose flying unit. Each faction plays differently as well. The Alin swarm quickly with many cheap disposable units. Thoguh the Cuotl take a long time to gain momentum their powerful units give them a large late game advantage. The Vinci are the most balanced force and will are easy to pick up and play.

The terrain in the game is varied, the lush jungles of the Cuotl, scorched deserts of the Alin tall cliffs and grasslands of the Vinci with many varied elevations. Rise of Legends does cliffs and valleys very well, but where is the water? Rivers and lakes are conspicuously absent.

The campaign itself takes place on a world map, and you can choose which territory to attack, though each stage of the campaign does have specific objectives you must accomplish to advance. Each territory you conquer will add more resources to your force, gain you new units or heroes, or upgrade your existing units and heroes. Sharing the world map with you are enemy generals who will attempt to conquer your hard won territories, so at some point you will be forced to square off against them. The campaign has a great sense of continuity as each victory makes your army better, and Giacomo grows more powerful as you progress.

The campaign missions themselves are a mixed bag, falling into three distinct styles. First there is the objective based mission most common to strategy games where you must build a base of a certain size, destroy a certain number of buildings, defeat an opponent on a prearranged map, and so forth. Second there are the hero missions where you must use the special abilities of your heroes and a small number of units to stay alive and accomplish your objectives. There is no base building in the hero missions just straight up unit versus unit tactics. Thirdly there are the skirmish games that are like training for multiplayer.

All these modes make for great variety in the single player campaign, so it will be hard to get bored. There doesn't seem to be any standards with the difficulty of the missions though. Some of the hero missions require very little player input to accomplish. The end missions in the different campaigns are almost too easy to beat, while some missions in the middle of the campaign are quite difficult and take hours to accomplish. The skirmish maps are a challenge at first, but once you have figured out how to beat the computer opponent once, it's easy to repeat the process.

Besides the pacing and difficulty, the biggest problem with the single player is the story that is told during the missions and through the occasional computer generated animation. With elements borrowed from renaissance Italy, the Arabian Nights, and the Stargate series, there was the possibility for an interesting plot, but we are not so lucky. Young Giacomo's motivation is revenge. A guy with a big mustache and a monocle kills his brother and he sets out on a quest to kill him. There are a couple other story elements tacked on there, like a love triangle and some alien artifacts, but these things truly feel unnecessary and forced. Add to that the awful voice acting and the otherwise good single player experience can become an exercise in eye rolling.

Multiplayer is the tarnished jewel in the crown. The multiplayer suite is easy to use, can connect you to the desired kind of game you wish to play, and your opponents skill level is easy to see. Once the game starts the play slowly builds until it becomes fast and furious with few moments to catch your breath. The game is finely balanced and a myriad of paths exist which lead to victory. When you are soundly thrashed by the opposition, it happens, the game replay is saved so you can review the game and learn from your mistakes, a useful feature.

Connecting to a game can be difficult however. Router ports must be configured properly, and even then games with more than two players have difficulty getting started. Recent patches which the game thankfully downloads itself have fixed some of these connection issues, but these problems never should have existed in the first place.