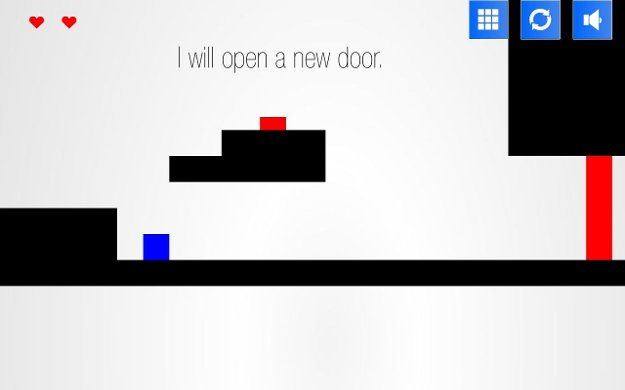 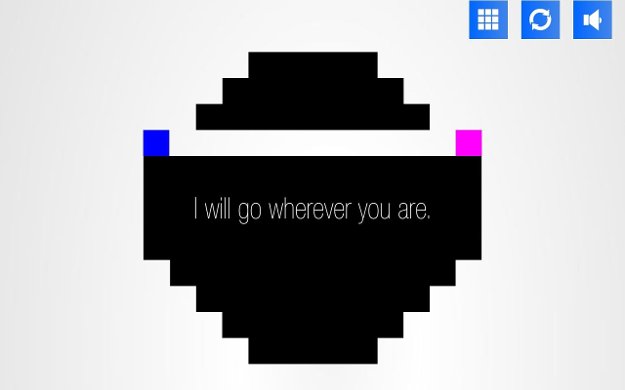 Pretentious Game caught my eye because I saw a description where it was touted as a poetic experience set to a puzzle, platformer.  That sounded very interesting to me. Not because I'm the best with puzzle platformers or because I'm particularly interested in them, but because I'm interested in poetry. I love it. I've written it (yes, everyone has, but I swear mine's really good!) and I have a few poems that I hold near and dear to my heart.  The idea of playing a game set to a poetic story really interested me.

As a matter of fact, the idea of playing a game that set an emphasis on story with the actions of your character being minimized in favor of the story was incredibly interesting.  When I saw a screenshot, I saw one with the simple blocks and lines of the game play and some of the words of the story on the screen in the background. Very simplistic and pure.  It was a very intriguing thought. Story is one of the main things that I enjoy about playing games. Very rarely am I willing to just sit back and enjoy a mindless shoot em up without some sort of engaging story. I want drama, I want characterization. I want something to care about at the end of the day and to make me feel as if I've spent my time on the game for a reason. I thought that with the emphasis on story and the focus being shifted slightly away from gameplay with Pretentious, I would get that.

As I started playing, the puzzles were fairly simple.  It seemed simple enough that I could focus on the story.  Each of the puzzles related to the story being told and it all meshed together very nicely.  I wasn't the most drawn into the story but I could deal with that for the time being. I was willing to keep moving forward and see what happened.  Before I knew it though, the first part of the story was over and I was moving on to the next.  Once I got to the next section, the puzzles started getting not more difficult, but a little more annoying.  The story didn't become more interesting and I was struggling to see anything in the story that was engaging or interesting.

I very quickly started loosing interest in the story as a whole. Granted, it may not have been the poetic experience I was expecting and that's fine. But it was still supposed to be a story based experience. The puzzles were not that engaging and it was clear that they were supposed to accompany the story that was happening on the screen. One was nothing without the other. And frankly, I could care less about the story. It started to rapidly evolved in a soap opera-esque tale of love and betrayal that I could less about.  I almost felt like I was a fly on the wall in someone's therapy session. And the puzzles became more annoying as the levels progressed. Again, not difficult, annoying. 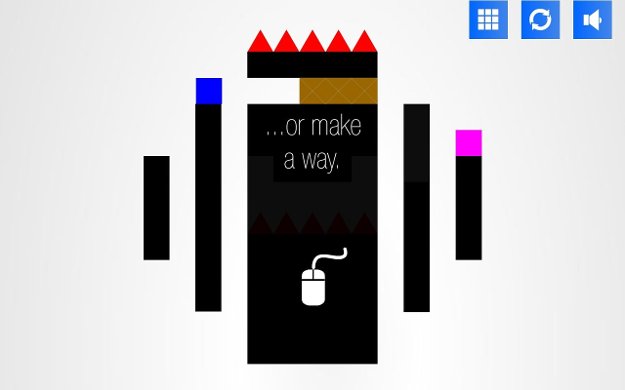 This game had absolutely nothing going for it. Not an interesting story, not any kind of interesting puzzles. Nothing. I don't care about a wife and husband drifting apart. I don't care about a mistress and a cheating husband. I just don't. It's not interesting. It's boring and it's dull. And it's not the sort of thing you set to a simple puzzle platformer and expect people to be engaged by. I didn't feel my heartstrings get pulled, I didn't feel any emotional connection to the characters. I could have watched them all go up in a fiery inferno and felt nothing.

And in the end a game that makes you feel nothing but annoyance is a waste. The game barely took any time to finish and even still, I felt like I spent too much time on it. It wasn't just pretentious; I'm not entirely sure there's a good word to describe how far up it's own rear end this game is. I wouldn't recommend spending the time to play it. There are better stories available on day time television and there are far better platformers available out there to play.  This game did neither element well and together they crashed and burned so hardcore that I'm surprised the fan didn't blow out on my computer when I loaded the game up.