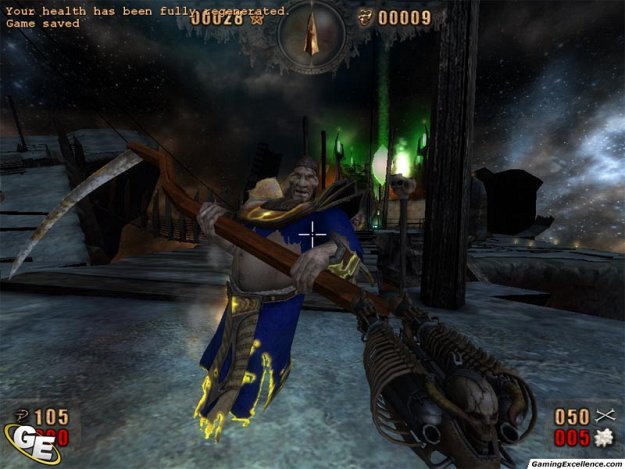 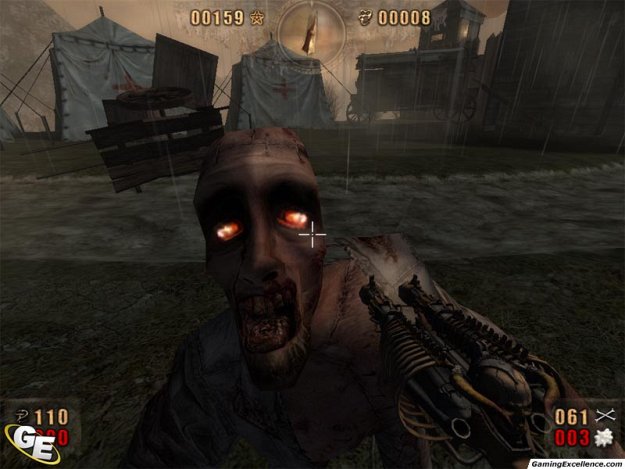 First person shooters have come a long way since their inception in the early '90s, with titles such as Half Life and Halo becoming leaders of the video game industry. The genre has evolved from its humble beginnings as simple yet entertaining run-and-gun games to story-driven, adrenaline-fueled pieces of art. In this sense, Painkiller: Overdose is a throwback in every sense of the word. These huge blockbuster games have made it hard for an old-school shooter to survive, and Overdose doesn't have many redeeming qualities to make it worth playing.

Painkiller: Overdose is a stand-alone expansion to People Can Fly's shooter "Painkiller" released in 2004. It was originally a community mod, and judging by the final product, wasn't changed too much. Overdose is supposed to be a bridge between Painkiller and an eventual sequel, and that offers some justification for the shortcomings of the game, but not enough to warrant a purchase.

You play as Belial, a half-demon, half-angel who was imprisoned in Purgatory for being a half-breed, and therefore, untrustworthy to both Heaven and Hell. The game starts off with you being released from your prison, beginning your quest of vengeance against those who imprisoned you and trying to find out why you were released. A short cutscene takes place at the end of each of the three chapters, although they mostly consist of Belial making bad jokes to himself while a book shows pictures, some of which actually move. The revenge tale gets its point across well enough, however, just when you think the story is about to pick up, the game ends. I was left with a sour taste in my mouth, as it really feels like you haven't accomplished anything.

The saving grace of the few, short "cutscenes" is the voice acting of Belial. His dark, gruff tone nails the feeling of the game perfectly. What this excellent voice acting can't do, however, is save the game from its terrible script. Belial's speeches are littered with poor attempts at humor, and writing that is more repetitive than the gameplay. The worst, however, comes out during the actual shooting. After killing an enemy, you'll sometimes be treated to Belial spouting off cheesy one-liners, such as "Another one bites the dust" and "Kiss my shiny half-demon butt". These get extremely annoying very quickly, but thankfully can be turned off in the options.

Bad attempts at wit aside, the gameplay is what matters the most in Overdose. If you've played the original Painkiller, then you're in for more of the same thing…well, actually, you're in for the exact same thing. Overdose is a speed-oriented shooter that works in a very arcade-like manner. You walk into a room, the door slams shut, and hordes of demonic minions come at you until you've killed them all. Then, another door opens (which fully replenishes your health) and you repeat the process again. Repeat ten to twenty times or so per level, for sixteen levels, and that's Painkiller: Overdose.

This is fun for the first few rooms in each level, but gets repetitive rather quickly. The monsters you fight in each level are extremely unique, ranging from blood-spewing fiends to demonic birdhouses that shoot suicidal chickens at you. The problem is, after the first couple of rooms, you get to see all the demons the level has to offer, and it becomes a real chore to keep going. The AI is also really dumb in Overdose, as most of the monsters will simply run at you mindlessly while you shoot them in the head.

Also returning from the original game is the inclusion of a tarot card system, where you are rewarded for doing certain things in each level, such as beating it in a certain time frame or only using one weapon. This inclusion isn't really effective at adding replay value to the single player, as the rewards are often things that should've been included in the game initially (such as the ability to gather souls without having to walk directly over them, as they disappear rather quickly).

Once in a while, you'll be treated to a boss fight. These bosses are often giant creatures that tower over you, and are quite stunning the first time you see them. Even though they look like something you might see out of an action adventure game, these bosses stick to the basic structure of Overdose of having as little strategy as possible. Often you just shoot their head or a glowing body part, and they go down quite easily, which is a shame, as over-the-top boss fights are something severely lacking in shooters today.

The best part about Overdose is the weaponry. The different guns you get to use are as unique as they are powerful. Even though there is just a handful to choose from, they all have their purpose and are all fun to use. These range from a severed demon head that shoots lasers out of its eyes, to a crossbow that can fling tiny skull grenades. Add in a rubick's cube that wants to be a weed whacker, and you've got a stellar lineup of weaponry that is a blast to use against the forces of Purgatory.

The level design in Overdose is strange to say the least. You'll be playing one level in Egypt, and then next you'll be on an asteroid. Then you'll be in a samurai village in Japan, before traveling to a haunted amusement park. The variety of settings make sure you don't get bored by being in one area too long, however, it makes it hard to catalogue Belial's journey, as there is no apparent theme in where he travels. It's like the developer just got lazy, and decided to throw certain levels into the game because it would be cool to slaughter demons there. While some of these levels are interesting concepts, others are just stupid and don't feel like they belong in the game at all.

Graphically, Painkiller didn't age well at all. With visual juggernauts like Crysis being released this year, Overdose looks more old-school then it tries to be. The enemy models aren't very well detailed, and most of the environments are quite bland looking, save for a few of the levels that are nicely designed. What Overdose does do well are some of its backdrops, which almost look like hand drawn paintings. For example, some levels have a sky of fire, and it really looks breathtaking, although it may simply be because it looks so good against the stale rocks and buildings. Overdose also did away with the heavy metal soundtrack the first game was known for, in favor of a more orchestral soundtrack. The music is not above average in anyway, and is probably the most distinct change from the first Painkiller.

Long load times also plague Overdose, as each level takes about a minute to load. This can be especially frustrating when you die, as it takes a long time to get back to the action. The game also experiences random slow downs, often to unplayable frame rates. Luckily, said slow downs only last a few seconds, but are irritating nonetheless. I even came across a couple instances where I killed every monster in the room, but the door to the next area wouldn't open, making me have to reload my game and waste another minute of my life at the dreaded load screen.

The multiplayer in Overdose is at its best is, boring, and at its worst, broken. There are all the standard matches like deathmatch and capture the flag, as well as some interesting modes such as everyone has the same gun, and you can only kill people after you shoot them into the air. It's too bad that there is barely anyone to play online, and when you do find a game, the lag is bad enough to ruin the experience. The maps are also quite small, and make games with just a handful of players too hectic and crazy to have any type of fun.

Painkiller: Overdose's strengths are as simple as its gameplay - you get to use cool guns to kill cool monsters. However, due to a myriad of shortcomings, the mindless killing of hell spawned demons won't hold your attention for long.