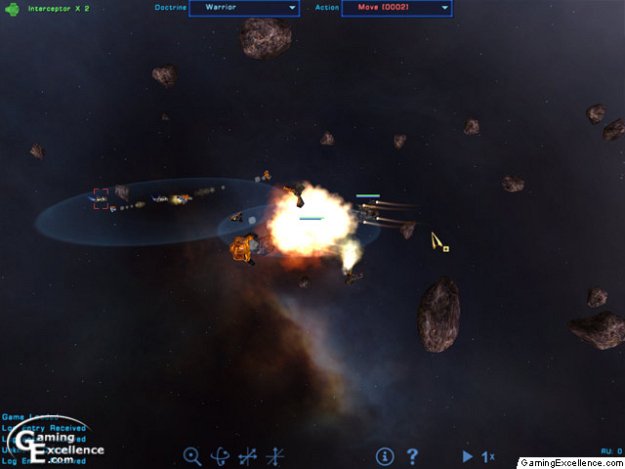 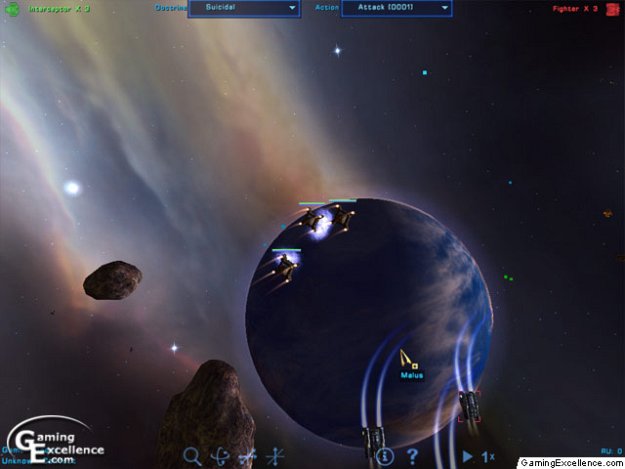 O.R.B, as described by the folks at Strategy First, "an acronym for Off-World Resource Base", but what does this really mean? Do you simply fly around and collect minerals, that is what a resource base is used for, correct? Not even close, as Strategy First's upcoming space based real time strategy game isn't just going to make a dent in the way space based strategy games are produced; it is going to revolutionize their development.

Developed and published by Montreal based Strategy First, O.R.B is set for release this August, after over five years of development. The first thing that came to mind after loading up the game was Homeworld; the popular space based real-time strategy title released several years ago. Many people may just consider O.R.B a clone of this title, something that is simply not true. O.R.B is unique, both in terms of physics and general entertainment value, something that clearly sets it apart from any other title ever developed for the PC.

O.R.B is based around the control of two races, the Malus and Alyssians, hated rivals fighting over the same precious resources in the system of Aldus. Little is known regarding the war that destroyed a powerful empire; these two civilizations were formed on different planets, both unknown of each other's existence until they came face to face while mining the same minerals. The arrogance and beliefs of each race didn't coincide, war was the direct result.

In an early preview beta of the title, we were given the opportunity to complete a single mission of the Malus campaign, a research vessel has been destroyed and you are on a mission of rescue and recovery. While scanning the debris field, you are warned by central command, Alyssian forces are on their way; it is finally time to see what this baby can do. As the Alyssian forces engaged, combat mode was set on each of the three vessels while they were placed into formation. Enemy forces approached, one of their vessels fell victim first, exploding in a fiery ball of debris. As the remaining vessels flew past at full throttle, another squadron of their vessels appeared on radar. Badly outnumbered, the great call came over the radio, "reinforcements are on the way", and that is when the battle heated up. O.R.B has the ability to appeal to a wide variety of audiences, anyone interested science fiction should have no problem adapting to the well-written storyline behind the title.

Graphics and visual detail is of core importance in primarily any title developed for a modern audience, and the artists at Strategy First have been known for producing some of the most detailed and beautiful visuals, detail that can surprise even the most avid gamer. O.R.B is no exception to this rule, the environments are of magnificent detail and the textures included are hands down some of the best ever presented in any title. The units are well modeled, although the some appeared somewhat simplistic in design. A variety of beautiful effects follow the same trend of exceptional detail, the explosion and shock wave as a vessel explodes into a fiery ball of smoke and debris, and the blue glare as a shield system takes damage from enemy fire are just a few examples. Although the game has been in development for more than five years, the graphics engine is not suffering whatsoever as it has kept up with the modern techniques and graphical standards, and surpassed them in a variety of different ways.

The challenges of developing a three-dimensional space real-time strategy title are many; several have tried, while few have succeeded. Many two dimensional grid-based real time strategy titles have been released in the past; there is just something about adding that third axis that is so troublesome. Maybe it is the navigational problems, or even the human perception of three-dimensions on a two-dimensional computer monitor, either way it is extremely complex and challenging to devise this combination. From the playable tutorials and the first mission in the campaign, although it only involved some close combat between fighters on both sides, the physics engine presented is one that looks to be coming along very nicely, built from the ground up by the developers at Strategy First. The interface is well developed and the controls are very simplistic in nature from what has been presented, players can move across the screen through the open space by clicking on a destination and holding the control key, or target and deploy a collection of vessels with the right mouse button, a simple system to complete complex actions. For the more advanced and experienced players, the preparation for battle takes a little more understanding and a more challenging control system, but it can be easily learned by anyone familiar with the genre.

O.R.B will feature two distinct campaigns, one from each of the races presented in the title. Strategy First has implemented a variety of unique features into the game, one massive dynamic universe with a variety of solar systems, planets, asteroid belts, complex orbits, persistent debris, and extraordinary spatial environments are how they describe it. This dynamically driven universe is quite a challenge to create, the freedom and ability to go where you want, when you want is something that many will enjoy, especially those who want to create their own adventure.

O.R.B takes a new approach on the whole idea of space real time strategy titles. Instead of controlling the movement of every unit, players have the option to prepare a battle plan and set doctrines for each vessel, a successful representation of what the game model is capable of pursuing. Whether it is a complex multi-directional attack you have planned or a simple head-to-head combat in the suicidal doctrine, the game takes a unique perspective by allowing you to pause the title to plan out a strategy before the battle begins, something rarely if ever seen in a title of this magnitude.

Although the ability to manage and collect resources is not present in the early beta, it is evident that this will play a vital role when the game is released this summer. The main focus on the game is not on the warfare between the two races, it is derived from the resource management aspect and supporting your fleet of vessels, to defeat the enemy both in brute force and strategic planning. It will be interesting to see what O.R.B holds in store for us in terms of resource management, but if it is anything like the general playability and balance of the game in its current status, one can expect quite a bit from Strategy First upon the titles release.

When the game is released this summer, a wide variety of combat and tactical units will be presented, everything from "shock troops", several different fighter models, specialized units, multiple capital ship classes and support vessels. The game will offer Internet support for up to eight players in a co-operative style match or a head-to-head multiplayer mode that will appeal to the Homeworld audience. A downloadable campaign editor will be available shortly after the release of the title, allowing players to script scenarios, create event triggers, campaigns, and cut scenes with very few limitations. This ease of expansion and support for player-based modifications is a very positive aspect, and is very reliant on the support and understanding of the developer, something Strategy First is well known for.

Even though this beta is an early preview version, it surprisingly how few bugs are present, usually in early betas the titles are riddled with bugs and errors. As a developer, Strategy First is known for doing a good polishing job, and hopefully O.R.B isn't rushed for it's released as the title has great potential. The game has already been in development for more than five years; hopefully it remains as bug-free and entertaining as the beta currently is.

For anyone interested in the real-time strategy genre, O.R.B: Off-World Resource Base is one title you will want to keep an eye on. Set for release this summer, players should expect the unexpected if the final release is anything like the current status of the game.