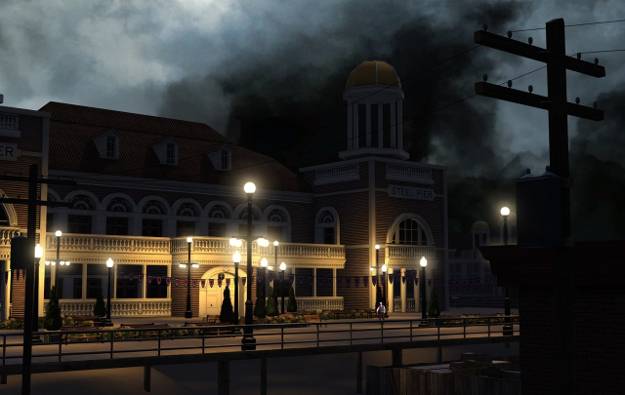 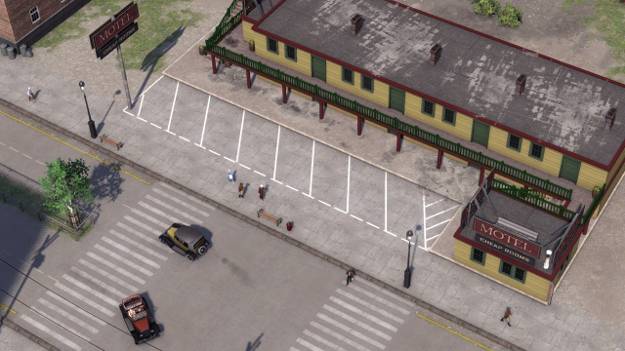 People talk about The American Dream all the time. It is the belief that even if you come from nothing, if you work hard and dedicate yourself to the goal you can become rich and powerful and be a big shot in the world. In the 1920s, many immigrants followed this dream, but the way to it was paved with booze, illegal acts, a pension for violence and the ability to keep your mouth shut.

It's the 1920s and it is a pretty big time for the Boardwalk in Atlantic City. Prohibition is instituted all over the country and up and coming gangsters have decided to get in on the illegal booze racquet as a means to line their pockets. However, there appears to be too many gangsters and not enough room for all of them and mobsters are not ones to share, so territorial battles are a staple between them. This is where you come in in Omerta: City of Gangsters. You are a fresh off the boat immigrant in Atlantic City and you decide you want to get in the bootlegging business. To start out, the game will ask you a few questions about the character you will be making. This is to flesh out the origins of your character, but it also serves a different purpose as well. For instance saying that you were a blacksmith in the old country will give you a +1 to your Might, while saying you left the country to escape a mob boss will give you a +1 to your Cunning.

After you decide on how to build your character, you are immediately thrown into the game. As a new person in the game, you pretty much just have a small hideout. If you're going to make it in this Prohibition-era world, you are going to have to get your hands on some booze to start off with, but you have very little to begin with. Your first task is to get in contact with an informant who can point you in the direction to get some. To do that, they are going to need a little compensation. This introduces you to two of the seven different resources that are present in the game: Beer, booze, storage, fear, liked, clean money and dirty money. For now, you can either pay the informant with some beer or the clean money you already have. Once compensated, they will let you know that a house near your location has some booze that you can "relieve" them of. A simple raid will net you the desired booze you want, but it is only the beginning of your rise.

I Need a Crew

With your first raid successful, you have begun to make your mark on Atlantic City, but the gangster business is not composed of one-man armies. If you want to expand your business, you are going to need some thugs to work for you. You are informed that a small-time hood named Squiggs is looking for work, so you can add him to your growing business, however don't expect him to work for free. Any gangsters you hire will take a monthly stipend out of your resources; for Squiggs, it is dirty money.

However, now that you have an extra member in your crew, you can send them on missions as well. With the more crew you accumulate, the more missions you can undertake at a time. Also, mobsters will sometimes have special perks that can help them when undertaking missions such as Squiggs' ability to gain extra resources from completed missions. City of Gangsters does run on a clock system so players will be busy for a time with the current mission and will be locked out of other engagements you take on during that time.

Also, to not get bogged down by so many jobs you can take, City of Gangsters features a handy world map with tabs that highlights they type of jobs you can take and what resources they will net you. So while you may have eight missions available, only the ones will show up with the resource tab you have highlighted. It may seem like a small thing at first, but with all that you can do in City of Gangsters and with all the missions you can undertake simultaneously, it helps to have this system so you don't become quickly overwhelmed.

I Got Things That Need To Be Moved

As anyone knows playing a strategy game, maintaining resources is a key way to succeed in City of Gangsters. We have already discussed the beer and liquor, but it's time to explain the other ones. Firearms are a resource needed to take part in drive-by shootings. Next there is Liked and Feared that grades how people think of you. If you open things like soup kitchens, people will see you as a good guy who gives back to the community making your Liked resource go up. However, a greater number in the Feared category may be good going against other gangsters, but it will also draw more heat to you from the authorities in the form of a star rating that resembles what you have seen in the Grand Theft Auto series. Once a star rating gets to five, an investigation begins and you must then pay a toll to make it go away. These things range from making a person in your gang go to jail for you or giving up some of your resources such as clean and dirty money. As Brockwood explained during the demo, it's really easy to get dirty money, but hard to spend it while it is very difficult to get clean money, but easy to spend it. One way to get clean money is to launder your money by opening legitimate businesses such as laundry mats.

As you gain more and more resources, you reach a cap on the number of things you can hold onto. Once your final resource; Storage, is full, you must hold a fire sale to be able to get more beer, liquor and firearms. Unloading a lot of your surplus resources can be a fast and easy way to make some money and open up resources to once again be collected for your empire.

Time to Get Your Hands Dirty

With all the resource grabbing you will be doing in the game; do not forget that this is the heyday for gangsters so you're not just going to be going around making business transactions and backdoor deals. Things are going to get violent. And they get violent really fast. Early on in my playthrough, I noticed bars on the portrait of Squiggs alerting me that he had been taken hostage by a rival mobster. When situations like this happen, you are then given the option to initiate tactical combat missions. These are scenarios that are more strategic than any type of RTS combat I have ever experienced. You don't just highlight over units while they auto attack a target. The combat is turned based in nature. If I can compare it to any type of gameplay, it would be the gameplay of 4th Edition Dungeon and Dragons. Movement and position during combat is very important with City of Gangsters. The combat is so strategic that it follows a formula that can't be strayed from. Before you make actions, take note of the points you have to spend. Combat turns are split up by MP (Movement Points) and AP (Action Points). Players first move their character by spending MP and can then attack units with AP. If you decide to launch an attack before you move, that's it; your turn is over.

Movement and position are just as key as it is hitting a target. When moving around an area, you will notice that you will be able to take cover behind structures such as boxes in warehouses or columns in banks. Using these covers give a strategic advantage to players and opponents as it can lower the percentage of being hit by enemy fire. A way to increase your chances also rolls into your AP as you can launch different type of attacks. You have standard attacks that use a very small amount of AP, so you can attack more often. But using things like precision shots will increase your chances of hitting, but will take up more AP. Also an important thing to notice is the Courage Bar below your Health Bar. As a firefight goes on and on the Courage Bar depletes more and more. Once it is completely gone, the accuracy of your character will get worse making even more difficult to hit your target.

As it gets more difficult during tactical combat scenarios, you may find your boss and followers floored by rival gangsters. Don't worry, death doesn't mean the end of the game, but that doesn't mean you will get away scot-free. Each time you are downed, your mobster will obtain a persistent wound and these things aren't just cosmetic as they were in Fable II. You may end up with things such as a bruised eye that lowers your accuracy. Some of these things can be healed with a doctor, but there may be some persistent wounds that are harder to get rid of as a completely shot out eye. Brockwood also told people to take note to the position of your own men on the field. There are some weapons in the game such as the infamous Tommy gun that has a cone of fire and friendly fire is always on during the game, so it is possible you could take down your own party.

Omerta: City of Gangsters is really shaping up to be a very in-depth and involved strategy game. Players who like to be more directly involved with combat situations and managing resources and characters very closely may want to give this a go come February 2013.