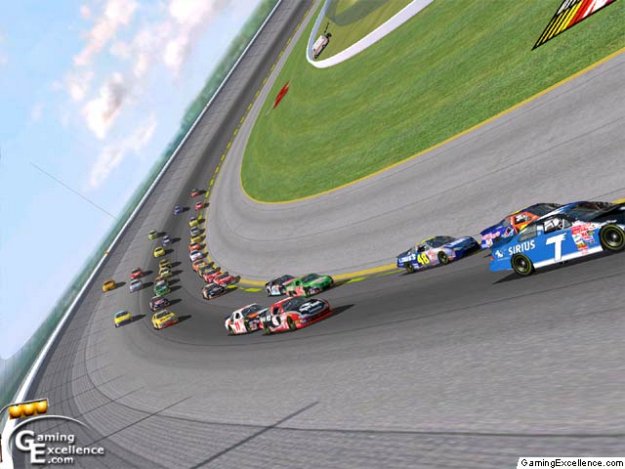 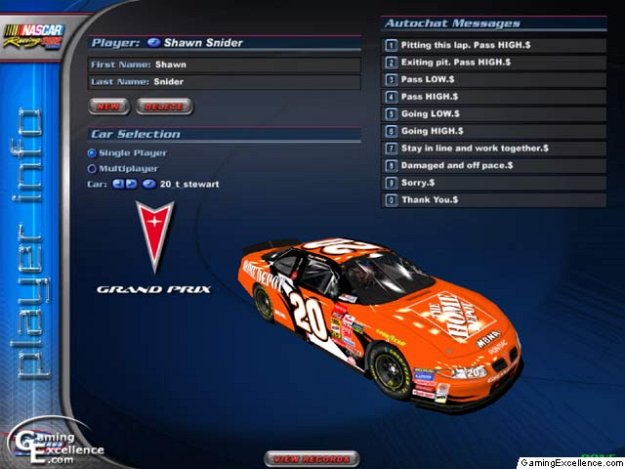 Have you ever wanted to step into the seat of a 750 horsepower NASCAR Winston Cup car, mash the gas petal, and hold on for the ride of a lifetime? If not, then I am at a loss, as I guess this isn't really the game for you. Otherwise, read-on, as NASCAR Racing 2002 awaits.

Papyrus Racing Games has always been known for producing some of the best racing simulations. It all began back in early 1994 with the original NASCAR Racing. Although well out of date by today's standards, NASCAR Racing was a remarkable evolution in the PC gaming market, and proved what was once thought to be impossible. Papyrus' next big step towards the current state of NASCAR Racing simulations was taken with the release of Grand Prix Legends. Although not a success upon its first release, only over the last year or so has the game gained high recognition and praise, as it has taken players this long to finally get a handle on the capabilities of this game. NASCAR Racing 2002 Season uses the same basic physics engine of that included in Grand Prix Legends several years ago, and it is still proving to be the most realistic to date.

With NASCAR Racing 4 released only a year or so ago, it was a surprise when Sierra announced NASCAR Racing 2002 Season, a variety of upgrades to the game, improved gameplay, graphics, damage, sound, and an overall new feeling to the game. Three new tracks have been added, two real Winston Cup courses and a fictional three-mile unrestricted oval for all the speed freaks out there. These new tracks include the Chicagoland Speedway and the Kansas Speedway, both 1.5-mile ovals added to the NASCAR calendar in 2001. Also included is nearly every team for the 2002 season, with new drivers, paint schemes, and sponsors.

The other track added to NASCAR Racing 2002 Season is completely fictional, named after a popular beverage and one of the larger NASCAR sponsors. The Coca-Cola Superspeedway is a 3.0 mile oval without restrictor plates, allowing players to race three wide and reach speeds of up to 230-240 miles per hour. The steep banks and large "drops" entering each corner are perfect for spinning out on, and at these speeds, impacts usually carry the car quite a distance before coming to a stop.

Many smaller enhancements have been made to NASCAR Racing 2002 Season that improve the experience of the player and make the game more accessible. Although the game still does not include a save race feature, it is now possible to restart a race through the in-car menu, something that was not included in NASCAR Racing 4. Also, players can now advance the session directly to race with a single mouse click, without having to go through the qualifying and warmup menus. These small enhancements are a large addition and improve the title as a whole.

Two of the largest new features added to the game since NASCAR Racing 4 are the complete replay editor and the track tutorials narrated by Darrell Waltrip. For those unfamiliar with Darrell Waltrip, he is a retired veteran from the NASCAR Winston Cup Series, with a successful career of 84 wins and 3 championships. He currently is a play-by-play commentator for FOX Sports and one of the best-known personalities at the track. These interactive track tutorials and the fundamental driving lessons included are a welcome change of pace from previous NASCAR Simulations from Papyrus, and can help drivers better understand the rules of NASCAR. As a NASCAR Racing 4 veteran myself, these tutorials managed to shave a few tenth's of a second off my lap times at a variety of tracks, a great improvement from a simple addition to the game.

The replay editor included in NASCAR Racing 2002 Season allows players to create television style events quickly and easily. Players can load a replay and add special effects, text, sound, and a variety of other creative tools to enhance the experience. Camera angles and points of focus can be specified as well, whether it is a major accident or the winner taking the checkered flag, and fade effects between each scene gives players the idea of watching a NASCAR broadcast on television. This editor is especially useful for league administrators who wish to prepare highlights of a league event, or simply want to get the feeling of creating a real race broadcast. The only problem with this feature is the inability to export the edited replays to a useful format, such as avi or mpeg. Currently, these replays cannot be used outside the game, which is somewhat unfortunate as it can be annoying to have to load the game every time you wish to view a replay. Other than this issue, the replay editor is a solid addition and something that can be widely used and enjoyed.

The gameplay engine included in NASCAR Racing 2002 Season is very similar to that found in NASCAR Racing 4 with some general enhancements and tweaks. Experienced NASCAR Racing 4 drivers will notice the modifications almost immediately, as the general feel for the car is different than the previous version. Players have to learn to be lighter on the throttle and brake earlier when entering a corner to prevent spinning out of control, and show a little more tolerance towards the wear and tear on each car. These modifications are a good addition to the title, as they offer a more realistic and entertaining experience.

When Papyrus released NASCAR Racing 4, the graphics were outstanding, well ahead of their time. Somehow, Papyrus' talented group of artists have gone and done it again, with improved visual quality and more realistic and vivid textures. Track enhancements are immediately noticeable, with much more realistic pavement and grass textures, and an overall improvement in the visual aspect. The dynamic lighting and reflection effects, as well as the gorgeous sky visuals offer much to the player, and offer a much more realistic feel. The cars have lost some of their "cartoonish" look that could be seen in NASCAR Racing 4, and have taken on more of a metallic glare. Many small improvements have been included as well, most notably the ability to backfire the engine when slowing for a corner. For anyone unfamiliar with the term, it involves the flames from an exhaust pipe from unused fuel when a driver lets up on the gas. This fuel is ignited and creates a nice little show when entering the corner of a track, especially during night races. The largest improvement however, is the texture quality. Papyrus has bumped up the texture resolutions, improving both the object realism and picture quality. Unfortunately, these graphical enhancements have a price that comes in the form of system requirements.

Unfortunately, NASCAR Racing 2002 Season still does have its flaws, some of which are more noticeable than others. This game requires a monster machine to play, supporting D3D mode of graphics acceleration, and OpenGL as an unsupported addition. Even on the top of the line system we tested the game on, the framerates became extremely low at times, OpenGL proved to give the best results. Some tracks can be completely unplayable at higher resolutions, Las Vegas and Martinsville showing some of the lowest framerates. Even with the visual quality turned down, framerates are severely lacking, and Papyrus has to do some major code tweaking in a patch to improve these issues.

One of the biggest gripes about NASCAR Racing 4 was the artificial intelligence of the computer-controlled opponents. Not only did they drive extremely erratically, often they would completely forget about the player and drive right into the side of your car. Although the AI is not perfect in NASCAR Racing 2002 Season, it offers a much more realistic and improved experience from past versions. During a crash, AI cars now do nearly everything possible to avoid a collision, whether it's driving down through the grass or up along the wall. Often, you will see two AI cars come together on the track and wreck, something rairly seen in past NASCAR games. The AI still does have it's problems however, as sometimes when avoiding an accident, they drive directly into the wall for absolutely no reason or steer right into a spinning car. These flaws are noticeable, but don't take away from the game that much.

The sound in NASCAR Racing 2002 Season is very much improved from previous renditions and is possibly the largest enhancement from NASCAR Racing 4. The sound effects included in NASCAR Racing 2002 Season are remarkable; something that Papyrus has spent a lot of time perfecting. Anyone who has watched a NASCAR race on television will immediately recognize the sound effects used, both in-car and from the replay menu. The wide variety of sound effects offers much to the simulation enthusiast, from the screeching of the tires around a corner to the sound of metal crumpling on impact with a wall. These sound effects are not perfect however, with some problems being reported on the SoundBlaster Live and Audigy line of sound cards. We tested the game using a SoundBlaster Live X-Gamer 5.1 sound card, and have noticed some "crackling" effects when the engine is running at a lower RPM level. However, these problems are minimal compared to the improvements made since NASCAR Racing 4, an all-around solid achievement of Papyrus.

Damage is a key element in realistic racing simulations, and Papyrus has a way of improving this damage model in every version of their NASCAR series. NASCAR Racing 2002 Season includes an all-new damage model, with realistic crumple effects and much more authentic vehicle responses. The damage effects at low speeds are extremely realistic, and the damage done to the different aspects of the car is well developed. Even on low-speed impacts, the car will become torn up with bent sheet metal, and usually some form of engine or wheel damage. These damage effects are not as realistic at higher speeds however, as the car has a "crumple limit" that only allows so much damage. Hopefully in a future release, Papyrus will include a dynamic damage model similar to that seen in past titles such as "Viper Racing", as they offer a much more realistic outcome than fixed damage limits.

One of the best elements included in NASCAR Racing 4 was the completely free multiplayer matchmaking service through Sierra.com, and this has returned in NASCAR Racing 2002 Season. Allowing up to 43 players to complete in a single venue through a local area network or an Internet connection, there is never a lack of servers available for use, no matter what time of the day you logon.