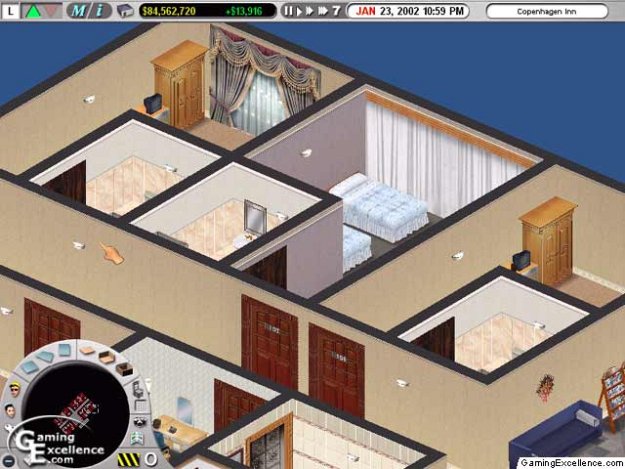 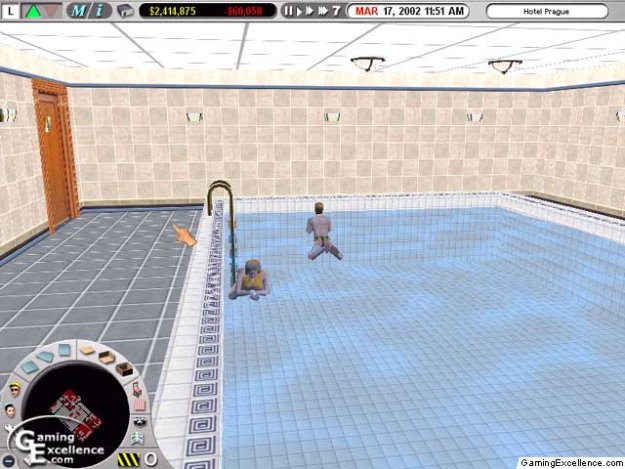 The hugely popular simulation genre has really taken off in the last several years primarily thanks to such titles as RollerCoaster Tycoon and The Sims. Since then, nearly every type of Tycoon title has been released, everything except a hotel oriented tycoon game. An enveloped idea, intriguing, unfortunately who knew operating a hotel could be such a lackluster, time consuming operation?

Before I start the actual review of Maximum Capacity: Hotel Giant, I want to say that I had very high hopes of this title. Upon its initial announcement, I was instantly reminded of SimTower, a game developed by Maxis back in the early 1990's. SimTower offered everything, the ability to run a hotel, build condominiums, offices, and restaurants, all while managing a reasonable financial balance. Although it was completely two dimensional, I cannot count the number of hours I spent trying to master the art of constructing a successful tower, I still load up that old title now and again and remind myself why it was so much fun. Why was I reminded of SimTower you ask? The title offered the ability to build a complete hotel, although the rooms were not customizable and only came in three flavors, single, double, and suite, this aspect of the game offered an intriguing and promising interest. Unfortunately, Maximum Capacity: Hotel Giant doesn't offer this same standard of interest derivation, in fact it's slow progressive nature combined with the plaguing gameplay and navigational problems take much of the entertainment value out of the title.

Published by JoWood Productions and developed by Enlight Software, the same people who brought you Capitalism II, Maximum Capacity: Hotel Giant offers a simple objective. That objective, build and operate a successful hotel, unfortunately this objective will become horribly blurred by the time you complete each level. Construction can be divided into several different categories, hotel facilities, guest rooms, and interior decoration. A variety of different facilities are available for use, indoor pool, restaurant, bar, health spa, and business center to mention a few. Anyone familiar with the methods of construction in titles such as The Sims will have to adapt to those of Maximum Capacity: Hotel Giant. Instead of building walls and entrances wherever you see fit, players must drop and drag layouts in which walls are constructed automatically. Sub-rooms whether it is a bathroom, change room, or even a kitchen can be added within each primary room. Once constructed, objects designated for that facility can be purchased and placed, although this is a very time consuming operation and players may find themselves spending upwards of an hour customizing a single facility. For each object, a purchase price and monthly maintenance expense fee are deducted from the players funds, however this aspect was not clearly thought through, as it is simply not realistic. Why should you have to pay a few hundred dollars to purchase a sofa, and then have to pay twenty or so dollars every month to maintain it? Over six hundred objects are available for use, a well-developed collection that may increase in the future should Enlight Software choose to release further objects for download on the official Hotel Giant website. Players may spend hours upon hours constructing a hotel, but you may begin to grow weary of the slow progression, as development time is unnecessarily lengthy.

Hotel Giant contains a variety of single player campaigns in which to progress through, as well as a random generator to quickly step into a game. The manual is basic and effectively outlines the important parts of the title. The tutorial is exceptional, extremely detailed and allows the player to get a hands on demonstration of the fundamentals and primary aspects of the game.

Maximum Capacity: Hotel Giant falls short primarily because of two reasons; the gameplay is regrettably the worst of the two. Menu navigation is made difficult by the poorly developed and incoherent menu system, adding to the already steep learning curve. Regrettably, that is not the only problem with the gameplay as many frustrating elements and issues arise while playing. The camera can be adjusted through three different perspectives, ground level, standard 3/4 views, as well as a top camera. Unlike The Sims, Maximum Capacity: Hotel Giant is completely three dimensional in design. The ability to walk among your guests and get a first hand view of your hotel is outstanding, however construction is made extremely difficult by the clumsy controls. Camera rotation is adjusted by holding the mouse button and moving the mouse from side to side, it is actually easier to construct rooms in the Sims even though you are restricted to four symmetrical viewpoints. During construction, other gameplay problems arise and have yet to be addressed, the worst is the random object rotation. So you have found the perfect location for the television set and click the mouse to set it in place. However, instead of placing the object in position, it rotates and you now have to try and find that location once again. This is of common occurrence in Maximum Capacity: Hotel Giant, on occasion I found myself frustrated and angry as its progression. Although the premise behind Hotel Giant is good, the gameplay simply doesn't deliver as expected.

The graphics presented in Hotel Giant are clearly the best aspect of the title, similar in looks to those of The Sims. Each object is well designed and texturing is well presented, although you are limited to 800x600 resolution. The exterior of the hotel is very limited in customization, twenty different models are available for selection but otherwise it cannot be modified. Along with the vibrant and well-presented objects and scenery, an option to enable dynamic lighting is available in the options menu; this feature looks fantastic to say the least. Not only does it add a realistic approach to the game, the effects generally look superb although they cause some slowdown. The graphical aspect of Maximum Capacity: Hotel Giant is above average, it is a shame the sound effects do not offer the same appeal.

Sound effects are viewed upon by some as a crucial element in the overall entertainment value of a game, others do not place as mush essence in the musical background. Regrettably, Maximum Capacity: Hotel Giant does not fare too well in the sound aspect. The game contains a selection of tracks for the background while constructing and operating your hotel, but these will quickly become repetitive after several hours of play. One major problem that was overlooked is the complete halt of the system whenever a new track loads, this occurs every few minutes for ten or so seconds at a time. Besides the background music, sound effects are virtually nonexistent or far in between, a definite oversight by the development team.

Have you ever wondered what the customers in a restaurant are thinking, how about the satisfaction of a guest during their stay in your hotel? Well, that mystery has been solved in Hotel Giant at last. Each customer has a unique profile accessible by double clicking the character; the profile contains a several different types of information, complaints, needs, and suggestions for improving the hotel. Similarly, staff members are required to operate and maintain the hotel, and are rated based on their performance and paid accordingly. This approach on understanding your staff and guests will lead you down the path to success if you play your cards right, but could also lead to disaster if you do not interpret the data correctly.

Maximum Capacity: Hotel Giant aims to be an economic simulation; unfortunately the title is to focused on the financial balance rather than sheer entertainment value. For an economic simulation, several elements appear to have been overlooked by the development team, mainly the advertising portion of the title. For some reason, Hotel Giant lacks the ability to advertise or run special offers. This type of model is usually good to build a popular rating and boast what the hotel has to offer, regrettably an important aspect overlooked. Another element that was missed was the staff position of housekeeping. Ever hotel has housekeepers, people hired to take care of the guest rooms and clean up after the customers. Maximum Capacity: Hotel Giant also lacks the ability to hire this type of staff member; we are to assume the rooms clean themselves. For a management simulation, the title definitely lacks in these areas and this type of addition would be greatly beneficial.

Hotel Giant falls below expectations for one simple reason; it tries to be too much. A simulation is supposed to be entertaining, instead of taking the time to enjoy a walk around your masterpiece, you will be staring at financial figures trying to make a little more profit to complete the campaign. The graphics are above average, unfortunately the gameplay falls well below the standard threshold greatly depressing any entertainment and replay value the title has to offer.