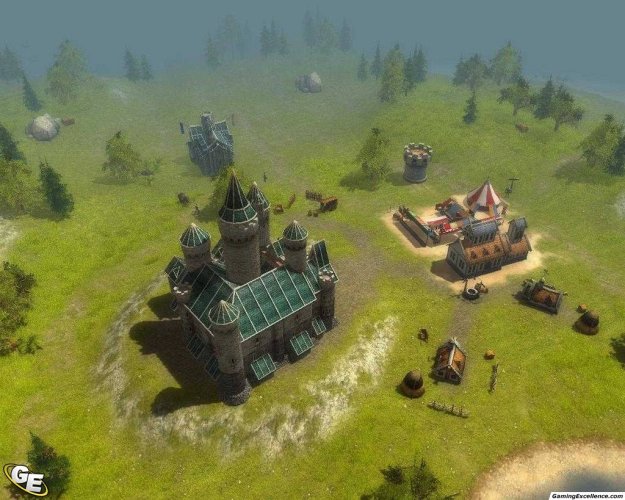 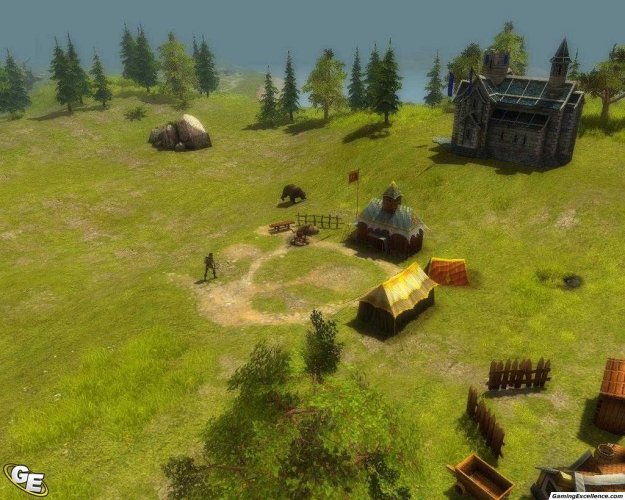 It's been almost a decade since the original Majesty: Fantasy Kingdom Sim made its hit debut in 2000, and some speculated that it might never see a sequel. Now, thanks to publisher Paradox Interactive and the well-established Russian developer, 1C Company, Majesty 2 will finally see light.

The basic premise of Majesty 2 is fairly simple. You are the ruler of a kingdom and must see your heroes and townsfolk (or peasants) through tough times. And, well, that's pretty much it. The overlaying map of Majesty 2 allows you to choose from a variety of missions, so the point of having an inherent story is basically moot. In other words, since you're not moving from Stage 1 to Stage 2 and so on, there's really no need to be bogged down with an underlying story. Granted, a witty voiceover gentleman will explain the 'why' and 'how' of each mission, but you will catch on pretty quickly without his guidance.

What made the first Majesty game so popular was its removal from the standard hover-over-the-shoulder-of-each-unit gameplay. Instead, Majesty asks that you spend some of your earned gold on flags that entice your heroes to check them out. You can do this in increments of 100 or 500, and the stronger your hero and further away the flag is measures how much gold it will take to catch their interest. Since there are a variety of hero units (rangers, mages, warriors, etc.), it is only fair that each hero has a specific flag type that they respond more quickly to. This can be key when deciding how to mark a specific objective.

As you begin to establish buildings around your palace, you will notice that the surrounding area is constantly under siege by rats and ratmen from the sewers, as well as various other baddies such as undead, minotaurs, and the occasional fire-breathing dragon. Since your heroes will start off at level one and must fight such creatures to level up, the situation is actually pretty helpful. Just make sure that you have set up the proper defenses (like archery towers) and feel free to sit back and watch your heroes grow in level. Keep in mind, however, that for your heroes to gain new abilities their corresponding guilds must be maintained and upgraded. Such improvements include poison arrows for rangers and a very handy healing spell for clerics.

Although the premise of setting up a reward and watching your heroes do the legwork themselves was groundbreaking and original in the first Majesty, the second game does little to improve on the formula. There are some points worth noting, however. It has been nine years since the original game came out, so the sound and graphics have been upgraded respectively. Majesty 2 also comes equipped with the standard multiplayer fare, allowing up to four players to duke it out online. Finally, at the end of each mission you are allowed to keep one hero to be used in future missions (at a very exorbitant price, no doubt), something that players of the original Majesty cried out for. Despite all of this, it would have been nice to see some fresher changes, such as enemy encampments that can only be destroyed by specific heroes, or even a more strategic variety of monsters to engage in battle with.

What Majesty 2 is good at (and what its predecessor was good at) is allowing the player to focus on building up their kingdom, while sending their heroes to flagged objectives without constant supervision. Although the tasks become a bit repetitive in the construct-and-scout market, there are mission-specific objectives that bring more depth to the gameplay. For instance, in one assignment the objective is to defeat a dragon that is reigning terror on your kingdom. So, while you're doing your best to fend off the run-of-the-mill ratmen and undead, you've also got a very angry flying lizard to deal with.

Majesty 2 has been a long time coming, and no matter what your favorite variety of real-time strategy game may be, you will find something to like about it. By keeping Majesty 2 true to its fantasy roots and exploring further its original hit management concept, as well as improving the overall visual and audio quality, 1C has revived the title without spoiling it. In a world of terrible sequels and cheesy knock-offs, it is all too refreshing to see a successful re-rendering of a masterpiece.