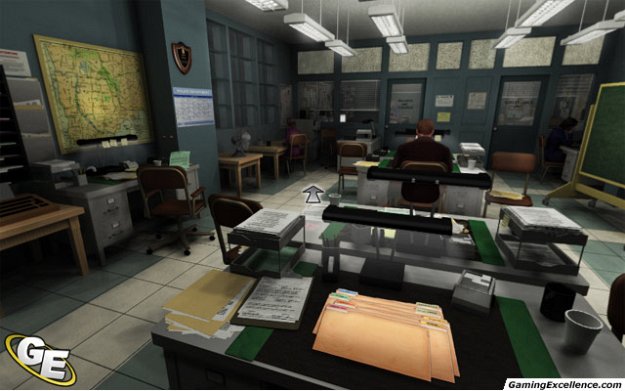 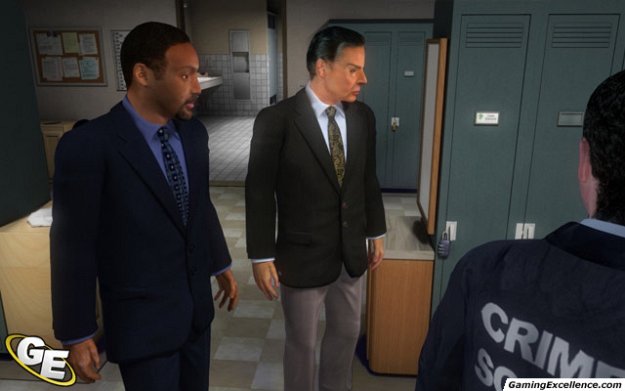 Law and Order: Justice is Served is the third iteration of the Law and Order adventure franchise based on the popular television series. This edition features the late Jerry Orbach as Senior Homicide Detective Lennie Briscoe, Jesse L. Martin as Detective Ed Green, and Elisabeth Rohm as Assistant District Attorney Serena Southerlyn as the characters you'll be portraying and working with throughout the game. Tennis star Patrick McEnroe also guest stars.

In this L&O game, you'll be working to solve the case of Elena Kusarova, a young Ukrainian tennis player found dead on the floor of the locker room. By interviewing witnesses and picking up pieces of evidence for investigation, you'll be able to gather enough reason for search warrants, and, eventually, and arrest warrant. During the trial, you'll need to watch what you and your opponent say in order to win your case.

The first part of the game is the Detective part, where you'll be questioning witnesses as you see fit. The game starts out in the locker room, from there you'll right-click to look at your map. As with this style of adventure title, names and locations become unlocked and visible on the map as the game progresses. When you pick up evidence you'll need to return to your office in order to request lab and research reports, which are necessary for finding links and new witnesses. It's a good idea to run as many psychological and surveillance reports as possible, since new information can surface at any time. You will need this information to back up your claims for both search and arrest warrants. Only after you have arrested the culprit can you proceed further in the game. You will be given a score out of 100 for each part.

In the Lawyer part, you'll need to pick your witnesses for the prosecution trial, question them, and then work to make sure that the defense doesn't badger or lead them while they are on the witness stand. The same goes for the defense trial. Before your prosecution rebuttal you'll need to gather more evidence to ensure a guilty verdict. If you have all the evidence before your rebuttal, your verdict should be guilty. If not, you've missed something. The verdict is the end of the game, and if your score is high enough, you will be given a URL with a password which will allow you to unlock bonus footage. Only with a perfect score of 100 can you unlock all the footage.

As with previous titles in the Law and Order franchise, the Java Runtime Environment (JRE) is required, thus for those whom do not have this installed, you'll have to grab it from Java.com first. This can lead to a lengthy install process. This is contrasted, however, by rather quick loading times from scenario to scenario. The opening sequence, which is taken directly from the TV show, works well in the game, and adds to the feeling of being in the episode. The help menus, which can be found on your character's cell phone by calling either the Lieutenant or the District Attorney, are very helpful in finding out how to request reports and finding out whether or not you have enough evidence for a search warrant, arrest warrant, or even to go to trial. The clues to figuring out combinations to locks and boxes can be found by looking around your immediate environment and finding a nickname or something that would be of importance to the character whose lock you are trying to open.

The audio and visuals in this game are excellent; there were not many delays in sound or image. The actors from the show do the voices well, and there is no monotone appearance to any of the voiceovers. The only aspect that might need to be changed here is the quip each time you look at a new piece of evidence. Many of them are unnecessary and become more and more annoying as the game progresses. The visuals work very well with the audio; the character's mouths move appropriately and in sync with the audio, making it appear as though this was a person on television and not a CGI. The three main L&O characters' images are very well done, looking very realistic. Most of the graphics are very realistic in appearance and are not too sharp or skewed.

The aspect that really adds to this game are all of the mini puzzles inside of the case itself. In order to unlock safes, locks, and drawers, you'll need the keys. The answers to most of the puzzles are all around you, with the exceptions of some unique puzzles which need more thought. These puzzles can all be solved through trial and error, and they may take a while, but the satisfaction of figuring them out for yourself is worth it.

Overall, this game is enjoyable, and you'll need at around a weekend to finish it, depending on how quickly you solve the puzzles. The storyline is similar to an episode of L&O, with all the twists and turns that go with it. The plotline is engaging, but it won't change no matter how many times you play it.