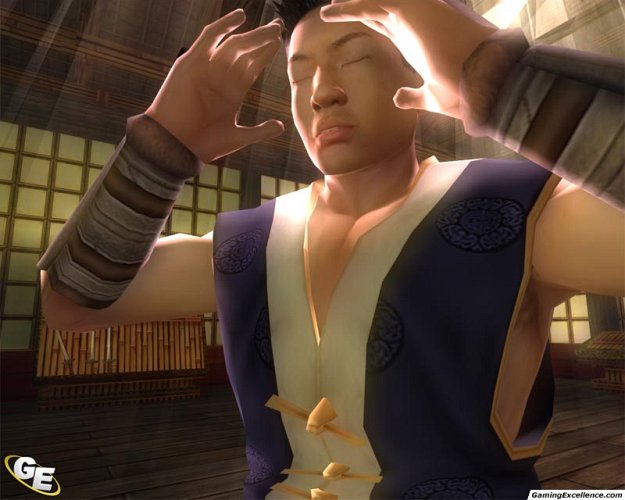 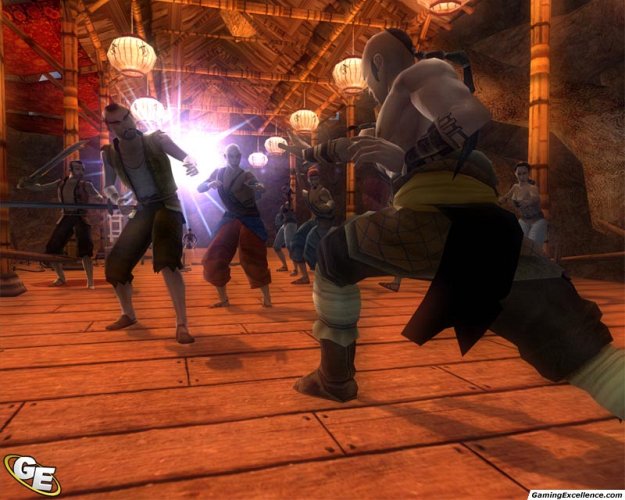 Living in a world filled with adventurers must be pretty convenient. If you've got a problem, stand outside your house, put up a little arrow pointing at you, and just wait for someone to come by, offering to solve your problem. They'll be so grateful from the experience they gain that they won't even care that you're paying them pennies for hours of labour.

Getting to Jade Empire, the original title was initially introduced on Xbox two years ago, and has (finally) made the transition to the PC. You play the role of a simple student whose life is changed when dark men enter it, to venture forth and change destinies. And in the process, play the winner of the 'most-out-of-place-top-down-shooter' award, a game reminiscent of old top-down pilot games of yore, in an ancient oriental setting.

The game will look familiar to anyone who has played Knights of the Old Republic, and it uses many of the same conventions in it's presentation, but what's the most different is the combat. Instead of a system that involves queuing up actions and watching them play out, Jade Empire takes a more direct role in combat: you control your character's attacks directly (when you press a button, they attack), and whether you hit or not is dependent not on statistics, but whether or not your fists connect. You gather followers in your quest, but can not control them directly, only being able to choose if you want them to attack (which is a more direct way for them to participate), or support ( where they assist you by recovering or strengthening you in combat).

The story of the game begins in a classical style of kung fu movies everywhere, but grows with a life of its own as time proceeds, throwing in a twist or two to keep the player on their feet. The characters don't feel as strong as they could be, but they're diverse and unique, and have enough personality to keep the story moving. The game often presents choices to you in which you can take the gentle, caring approach (Open Palm) or the stern, tougher approach (Closed Fist). This balance between caring and harsh approaches determines the alignment of your character, but it felt like it had too little an effect on the gameplay except for a few abilities that get stronger (or weaker) depending on how far up or down the spectrum of alignment you are.

The story itself is pretty good, but it repeatedly gets quite linear in many areas, and you'll find yourself being dragged forward through plot instead of being given the option to explore and take different routes. It's also annoying because few places in the game give you the option to go back to earn some more experience and raise your abilities if a current battle is too difficult. Sure, you could lower the difficulty temporarily, but that feels too much like giving up, especially in an RPG game. After beating the game, however, you get the option of starting a kind of 'new game plus', in which you restart the game with all your stats and abilities, so you can take different (and more challenging) approaches.

Though the PC version of the game allows you to change the resolution to make the game appear sharp and impressive, the video resolution appears to have stayed the same as the console version, and looks blurry and washed out. Regardless, the world of the Jade Empire is presented well with many effects to enhance the presentation of the world.

As mentioned earlier, combat is a direct affair: if the fist hits, the enemy hurts. It's a little more complicated than that, but like the story, could have more depth to it. The way combat takes place is with 'styles'. What style you're in determines the effect your attacks (three kinds: weak, strong, area-affect) will have. There are five types of styles to learn: martial, which are your basic attacks; support, which affects your enemies with status effects; magic, which lets you fling elements here and there with your 'chi'; weapons, which allow you to wield blades and staffs using 'focus'; and transformation, which lets you take powerful forms to fight with that drain your chi very quickly. There are differences between the styles that affect how you fight your enemies, such as the ranged magic attacks being preferable against enemies who have a strong melee attack and high defence, but are slow. Additionally, some enemies are immune to certain styles, so you have to balance out how you level up your abilities, or certain enemies will pose a big challenge. The combat holds its own pretty well, but sometimes can become repetitive when you find yourself doing the same thing over and over again. A flurry of punches is only cool so many times.

Seeing as this is a port, one of the most important things to know is how well it held up in the transition to the PC. The controls are fairly decent and simple, but the camera is just terrible. It gets stuck behind objects, above them, pointing at awkward angles, and sometimes an area will load and the camera will begin pointing at the floor. Directly at the floor. Loading or exiting the area solves this, which is still irritating, but the last time it happened to me was in the middle of the final boss fight. Most of the time, the camera is decent, but when it gets bad, it really hinders the game. Aside from that and a few issues with the menus behaving less mouse-oriented and more gamepad-oriented, the game holds up pretty well in the transition. Especially noteworthy are the severely reduced load times.

A unique setting, some interesting (sometimes cliched) characters, and a decent combat system makes Jade Empire a pretty good game to play. The PC version is really only for those that haven't played the one on the Xbox yet, since, aside from a couple new fighting styles and a minute amount of new content, little has been added to the game. Still, the Jade Empire makes for an interesting place and a very decent game.