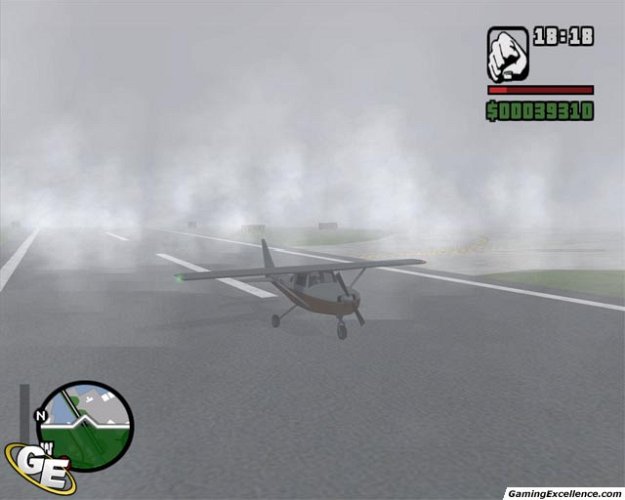 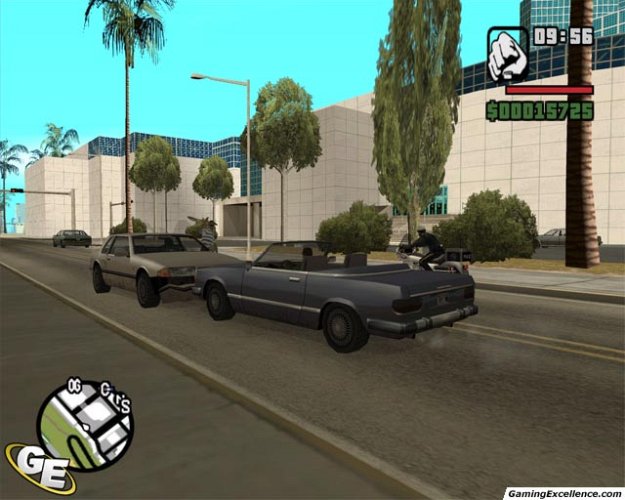 With reviews for both the PlayStation 2 and Xbox editions of Grand Theft Auto: San Andreas, there really isn't a whole lot more to say about the game itself. It's expansive, varied, vulgar, defining, addictive and able to impress even the harshest of critics. What Rockstar has been able to do with this series, time and time again, it's simply mind-boggling. But the formula works, and this third outing of Grand Theft Auto in a completely 3D world is nothing short of perfection. What other game on the planet allows you to do, well, everything?

I've never been much a fan of the direct console to PC ports, point in case the release of Conflict: Desert Storm in one of the worst PC ports I've ever played. With so much power on the PC, good optimization can truly harness these qualities and produce a visually stunning appearance. I'll say it right from the start, GTA San Andreas is an exceptional PC title, but when standing next to its console counterparts it seems to stumble a bit. That is not to say it's a bad title, in fact quite the opposite, but when given the choice your best bet is likely the Xbox edition.

So where does the PC edition of San Andreas falter? For starters, the menu system is a more-or-less a direct conversion, the same old mouse unfriendly thing we are used to seeing. Bland, and a little bit too simple, with a lot of the restrictions you'd find on a console.

Secondly, the control schema on the PC edition of GTA San Andreas is awful, and this is coming from a true PC gamer. I prefer to play practically every shooter, strategy game, and even titles as varied as Battlefield 1942 with a trusty mouse and keyboard (including Grand Theft Auto 3). Unfortunately, San Andreas just doesn't seem to work well with this setup. In fact, the only way I was able to really enjoy San Andreas was to setup a modified Xbox controller and, with the help of the outstanding open-source XBCD driver utility project, tirelessly mapping the different axis and triggers to the controls. San Andreas just has so many options that memorizing key combinations and regurgitating them in the heat of battle is no easy task. Using a controller simply seems the most intuitive way of dealing with such varied vehicles and movement (especially drive-by shootings), one area where the console versions show their strength.

San Andreas follows the story of CJ (Carl Johnson) who is returning from Liberty City in the early 90's, after a five year exodus, to bury his mother, clear his name and reclaim his territory. If San Andreas only followed CJ's story it would still be enough to warrant a purchase. The story is gritty and mature and eclipses many of Hollywood's current offerings. But the GTA series has always been about letting you do anything you want and San Andreas furthers this concept with so many ideas that you'd expect it to stumble. But the simple fact that it succeeds with such authority and determination at everything it attempts is proof enough that Liberty City and Vice City were no accidents. Rockstar Games loves making Grand Theft Auto and they will not compromise in any way regardless of the scope or difficulty of their ideas.

And where GTA3 and Vice City allowed you enough freedom to fill 10 different other titles, San Andreas easily trumps them both. How many games will let you drive any car, bike, plane or boat, sky dive, play basketball, date, pimp your ride, play DDR-type games, play mini videogames, work out, eat out, get tattoos & haircuts, buy clothes, take over a neighborhood, be wanted by the cops, do drive-by's, travel anywhere, burglarize houses and so much more? None, until now.

Sound-wise, San Andreas sounds really similar to its console counterparts. It's a funny, rude mix of songs, commercials, voice-overs and noise. In all cases, if you closed your eyes, you'd never know it was a game. The radio stations sound loud and crisp but some of the in-game voiceovers sound muffled. This is common when in a car (with the radio blaring) but also during cut-scenes. This may be attributed to the simple fact that all music levels seem much higher than voice levels. A little tweaking in the Options Menu would fix this, but then the music wouldn't sound as loud. With the PC edition, managing custom soundtracks is a breeze, as the title supports most of the common formats. Oddly enough, my custom soundtracks have never sounded so good, even in Windows Media Player itself. Whatever audio settings Rockstar sets its EQ's to, they sound great.

Voice-work and music selection has always played a paramount importance in the GTA series. While the music has always been quintessential to setting the tone and vibe of an era (and selling CDs as well) the voice work has always been without equal. From Hollywood talent to simple pedestrian one-liners, the audio portion is always well written and well delivered. In this iteration you will find The Game, Ice T, Samuel L. Jackson, Peter Fonda, Chris Penn, James Woods and Debi Mazar lending their vocal muscles to the cause. While Vice City will always reign at the supreme as The Perfectly Cast voice acting with its clever choices (Ray Liotta, Dennis Hopper, Burt Reynolds, Philip Michael Thomas, Jenna Jameson and Lawrence Taylor) San Andreas is no slouch. CJ may not have the clever one-liners and maniacal determination of Tommy Vercetti but he does sound authentic and believable.

Graphically, San Andreas is an impressive feat on the consoles, and although slightly enhanced from the Xbox edition, the PC graphics could be better. Some of the textures are a bit bland, that is really the only issue I can find with the quality of the visuals. Performance on the other hand is a serious concern; the Xbox and PS2 are optimized for that specific hardware and manage to keep the framerates solid. Even on a high-end PC with no anti-aliasing enabled, certain scenes bring the game to a virtual standstill. Notably, smoke effects and translucent clouds are the worst offenders. In one of the earlier missions where you have to enter a burning building, it can be a challenge simply because of the choppiness of the gameplay. Flying aircraft at high altitudes or through large patches of clouds can be difficult as well. If you overlook these performance issues, as they are few and far between, San Andreas is truly an impressive title.

With both the Xbox and PC editions of San Andreas, a much talked about new feature that has left more questions in its wake than answers is the 30 second replay. In a nutshell, you can access a 30 second replay of your last events by using an assigned hotkey. You cannot save the replay or control it very much except for swinging the camera angle around. It's a nice little add-on, but it doesn't feel fully fleshed out. It also shows some graphical glitches from time to time: like tires sinking into the pavement when using a bicycle or the dreaded palm-tree pop-up issue. Also, when the 30 seconds are up, you are left controlling CJ again. It would have been nice to return to the Options Menu and be able to watch it again. And truth be told, 30 seconds is not a long time when you consider some of the things you are capable of doing in San Andreas.

So is San Andreas the perfect game? Well, close to it. There are not many things that can be said against it once you realize the breadth of its scope. You won't really find anything more violent than previous GTA outings (chainsaw anyone?) but it should be noted that San Andreas does feature, for the first time, an African-American in the title role. The character is not a caricature or a collection of stereotypes however. CJ is written and played out with unyielding authenticity with real issues and problems. And if listening to Dr. Dre and NWA in general makes you queasy because of certain words, expect to hear them and hear them a lot. It took a lot of balls to write these parts as true to life as possible and it may have felt like a flood gate had opened at certain points, but it never felt like it was used simply for effect. These are characters in a certain time and place and their language, as shocking as it may be to some, would feel like a cop-out if it was written otherwise. Take from that the following: parents, your children will in one form or another be exposed to this game and its content. They will hear words and repeat them out of context. Consider that a precursor to a nice family discussion.

In the end, San Andreas eclipses every other game that has come before it simply because it is more than simply a bunch of code on a disc. San Andreas and the whole Grand Theft Auto series is truly a phenomenon that tests the boundaries of our society by gently pushing at the limits of our collective fabric. It puts forth ideas that we shy from and lets us explore them in a safe and controlled environment. Does San Andrea go too far sometimes? Yes and no. It gives us the freedom to do anything we choose. But these are our decisions. And for this reason it stands alone as an unprecedented achievement. Regardless of what platform you play it on, San Andreas must be experienced at all costs. It might not always be pretty, but it sure is fun.