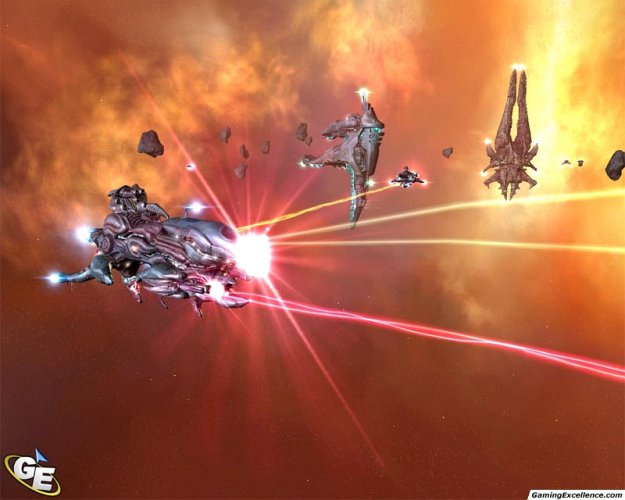 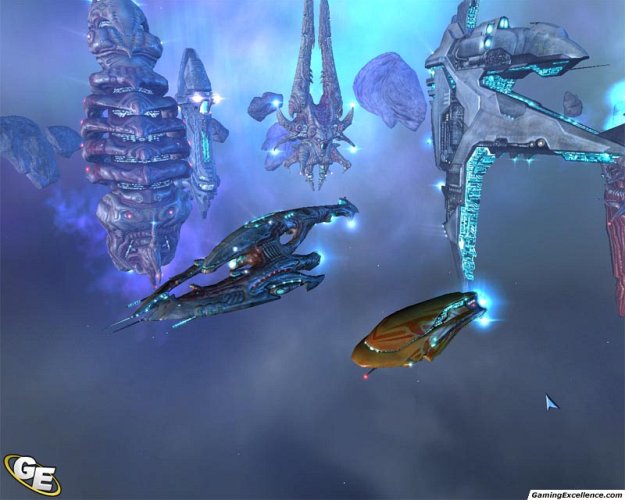 The idea of Genesis Rising is a fairly unique one: breed your own ships using genetics, customize your fleet with a variety of abilities, and wage space war while executing special attacks across the battlefield with your living spaceships. If done well, it would've been fun, but Genesis Rising fails to be enjoyable on so many levels that it just ends up being a huge disappointment.

The story is a little absurd, even given the context, and we're talking about a universe with living ships. In a nutshell, the human race, after being nearly exterminated, is fighting back and taking control of most of the universe. It is now a xenophobic force, annihilating all other species they encounter. To cement their position as the most powerful force ever, they've decided to find something called the Universal Heart, supposedly the thing that created existence. So, they send a small contingent of forces (despite their colossal, universal strength) to get this "the last unexplored galaxy in the universe". So, under the command of Iconah, the human race begins its complete conquest. By extreme chance, this last galaxy happens to be home to a variety of new races, some old rebellious ones, and all sorts of secrets.

This galaxy is divided into separate sections, each with objectives of their own. The objectives are fairly diverse, ranging from the typical 'destroy all the bad guys' to 'steal a secret weapon' to 'conduct trades', broken up with some verbal exchanges between Iconah and a variety of friends, enemies, and neutral parties. The problem is that there's little diversity between the maps' contents. Essentially, each of them have some stations (ship-producing facilities), some rocks, and perhaps a special feature here or there. Warping between sections doesn't feel like anything is actually changing except for the enemies. And, while the plot of the game gives the illusion of choice, like you can choose between following a trail or tracking a beacon, in the end you'll end up travelling everywhere anyway. What was nice was the ability to return to places previously visited, either to pick up some resources you may have missed the first time, or confront new enemies that have just appeared.

The strategy portion of the game is pretty standard. A series of ships build other ships that fight bad guys. Blood is the only resource in the game, and is collected from stations and carcasses of dead ships. There are few upgrades to speak of. The combat itself isn't implemented very well either. Despite being in space, you only have a 2D plane to move around on with your units, and combat consists of the ships staring each other down, not moving, while firing lasers. Even the smallest ships do this, which renders the speed upgrade sort of worthless. It makes me long for the space-dogfighting of the great intergalactic-RTS, Homeworld.

While the RTS elements are pretty thin on the surface (there are only three types of ships built to fight, for example), it's the genetics element that makes the game stand out. Each ship you build has a set number of 'mutation' slots. Within these slots, you're able to slide in a variety of 'genes'. These genes, found through trading, production, or by scavenging dead ships, are abilities and weapons like laser beams, boosts to speed and armor, and special abilities. Each ship can be customized differently, so you can make a speedy fighter or a plodding gunship, which adds a lot of strategy and can make or break your battles. As a neat visual experience, each mutation to a ship makes the ship grow that specified mutation, like an extra gun for firing weaponry. In fact, without these genes, a ship is worthless, unable to do anything but move around.

It sounds like a good idea on paper, but the execution leaves a lot to be desired. The menu for inserting genes into ships is a little clunky, and normally, that wouldn't be too bad. The problem is that in the middle of battle, when you're trying to replace fallen ships with new ones, you need to be able to fill the new ships with weapons, and the menu makes it hard to do this. To criticize the interface further, even something like the mini-map, which has to be one of the most valuable tools in an RTS game, is near-useless, reducing everything to tiny dots that can't be zoomed in on or understood.

The pacing of the game introduces another problem. Most of the game is slow-paced, you'll always find yourself either waiting for blood to be completely drained from a station or for some story event to occur. Opposite to this though is the pacing of the battles, which are hectic and even though they are often merely a series of lasers criss-crossing the screen. Add to that the frantic attempt to add genes to new ships, and you'll find that it's hard to implement any strategy while in battles. Often the ships and genes you enter with are the ships and genes that you leave with, give or take a few casualties. There's a pretty low unit count, so every ship matters, and it does introduce some strategy into the equation, but the low unit cap seems extremely confining, and I still don't understand why, given the resources of a universal empire, the force that is sent to capture the greatest power in existence can't be more than a dozen ships or so. And, as one of the oddest choices in the game, there is no ability for the user to save. The only time the game saves is when you enter a new area, so if you've just spent the last half hour or so collecting resources, only to attack a fleet and be defeated, you've just wasted half an hour of time.

It is worth mentioning the multiplayer aspect of the game. The only objective for victory is annihilation of the enemy, so it's not very diverse, but it plays better than the poorly-paced single-player campaign. You're given a set of genes to start out with when you begin, and can receive the rest through combat or trade with the independent groups that reside on the map. While there is a slow lull between battles, it's the multiplayer aspect that shows the uniqueness of the game. It doesn't make up for the poor interfaces though.

The music of the game is pretty good, both fittingly hollow and vast as space. It also adapts well to what's happening on the screen, growing faster during battles. The voice acting doesn't quite live up to the music though, but it isn't too painful to listen to. The graphics are well-done, showing the detail of each ship, including its mutations very well. There are some problems with visuals in the dialogue portions of the game however, and it's apparent that those areas weren't worked on as much as the space scenery.

As previously stated, there's a lot of potential in what the game box describes as "morphing a gene-based armada in real-time". Unfortunately, a lot of it is lost in the poor interface and bad pacing. The story isn't terribly great either; I mean really, the 'last' galaxy in the universe? And while the genes add a lot of strategy to the game, the too-fast pace of combat makes it hard to implement in any effective manner. The fact that you can't save your game at anytime is also annoying and frustrating in spots too. So while the unique mutation aspect of the game should be fun, in the end it's not enough to make the game enjoyable as a whole.