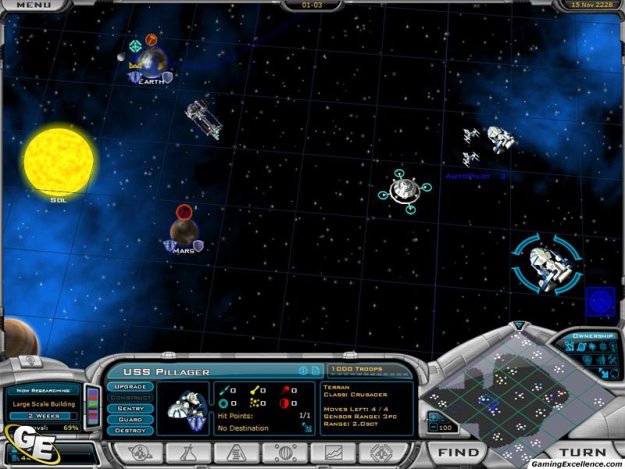 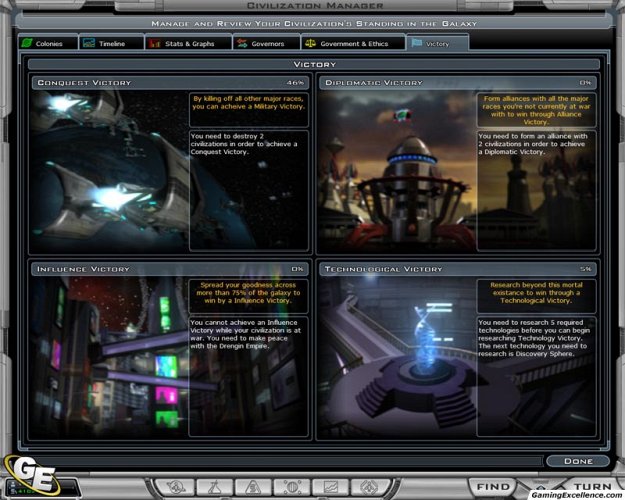 Released last year, Galactic Civilizations II: Dread Lords was really a gem in the rough. A turn-based strategy game based on the "4X" concept (explore, expand, exploit, and exterminate), Dread Lords pushed the boundaries of being too complex for beginners. And although it had an incredibly steep learning curve, it had near limitless potential with the sheer level of customization available, and was simply one of the best strategy games of the year.

Along comes Dark Avatar, the first expansion to this highly praised strategy release. While it doesn't have a lot of "major" enhancements, Dark Avatar offers up a lot of small changes that make a big impact on the game as a whole. The campaign begins when Dread Lords left off; the humans have been decimated and driven back to Earth, surrounded by an impenetrable barrier. This time around you play as the bad guys, facing off an even meaner set of bad guys. The Drengin Empire has always represented evil in the Galactic Civilizations universe, and this time they're the lesser of two evils. Your enemy, the Korath, originally a clan within the Drengin Empire, they are not satisfied with simply enslaving the galaxy. The Korath will only accept a complete genocide, and this has split the Empire apart in civil war. All in all it's actually quite a good story, and a well-designed campaign that utilizes many of the new features found in the expansion.

As Galactic Civilizations II is such a deep game, I'm going to place an emphasis on what the expansion brings to the table rather then describe the gameplay itself, check out our Dread Lords review for the basics. Dark Avatar brings a wealth of new content to the Galactic Civilizations II universe, new maps, units, races, scenarios, a series of new features, and a completely new campaign. Although the many new features are minor, they can drastically alter the outcome of any given session and add a variety of new strategic elements to the game.

Of the most radical changes is how Dark Avatar handles planetary environments. In Dread Lords, any civilization could colonize any planet, which usually meant that most of the games began with a mad rush to colonize as many planets as possible. This time around is a much more strategic approach, each planet has different environmental conditions, and while they may be inviting to one species, they are hostile towards another. Unless you possess the native ability to survive in these environments, you'll have to heavily invest in technology allowing you to do so. And even then, there is no guarantee that there will be an abundance of available planets that require the technology you've researched, its part of the risk versus reward style of play.

In Dread Lords, the only way to damage other civilizations was to go to war. Dark Avatar introduces the idea of espionage, allowing you to create covert agents and send them to various planets to gather intelligence (such as their overall condition, strengths, etc) and disrupt any planetary improvements. The only way to seek out and destroy these agents is by sacrificing one of your own through counterintelligence. These covert agent's are expensive (and the cost gets incrementally higher for every one you build), and never seem to survive long (a few turns is usually all it takes before they are history). Regardless, they are very powerful tool at your disposal, and the intelligence they gather is a very useful resource in measuring up your opponents.

Super abilities are a new feature designed to make each civilization feel more unique. These abilities vary greatly between each species, but can prove to be very advantageous depending on the game. As an example, the Drengin Empire has the Super Dominator ability, which gives them free ships when at war (although these ships are very lightweight and easy to destroy). Another example is the Korath and their Super Annihilatior ability. Instead of building transports, the Korath can send a spore ship that will simply wipe out all of the population on a planet. Each of the super abilities has some sort of downside as well, but the benefits always outweigh the disadvantages.

Another notable addition is that of mega-events, galaxy-altering events that intentionally upset the balance and change the shape of the game. They are completely optional (can be enabled or disabled as part of the game setup), and are as Stardock describes "not completely random" in the sense that they're designed to unbalance the game and introduce a new challenge. An outbreak of the plague that kills millions, terrorist groups causing chaos on a planet, or an asteroid colliding with a planet and forming a new asteroid field are just a few examples of these "massive" events.

A few of the other new features are diplomatic treaties (where one civilization shares a resource with another for the sake of "diplomatic relations"), asteroid fields which provide a little more of the "space" feel and can be mined for resources, and the ability to crank the AI to use all of the available CPU to "better match your abilities" (although I didn't notice much difference here even on a high-end machine).

While Dread Lords was no slouch when it came to tweaking, Dark Avatar takes it to an all new level. You can play as either of the two new races, or create your own, customizing every aspect of them (appearance, ships, strengths, weaknesses, governments, and even how they behave). If there's ever been a game where you could build every ship in the Star Trek universe and pit the Enterprise against the foes in Battlestar Galactica, this is it. However, you'll have to have some basic talent to be able to build those complex ships though.

Graphically, the expansion ups the detail on the both the ships and starbases, with significantly improved texture work and a higher polygon count. As with the environments, the weapon effects and explosions are much improved over Dread Lords, although they still appear somewhat grainy if you zoom in close.

If the game wasn't hard enough already, Stardock has tweaked the AI again, making the game that much more challenging. One of my biggest complaints of the first is that the learning curve for the game is incredibly steep, for beginners it's almost overwhelming to actually get started. While it's a difficult issue to address due to the complexity of the game mechanics and the seemingly endless styles of play, the Dark Avatar campaign does a decent job of introducing the absolute basics.

Dark Avatar is truly a superb expansion in the way that it not only refines, but provides a new direction for the gameplay and adds a significant value to the game. For beginners, the very steep learning curve may push them away, but for those willing to stick through it, a superb turn-based strategy game awaits. The game still doesn't have a multiplayer component, regardless for any fans of the series the expansion is a no-brainer. And if you enjoy turn-based strategy games and don't already own Galactic Civilizations II, then I'm curious as to what planet you've been living on for the last year. Highly recommended.