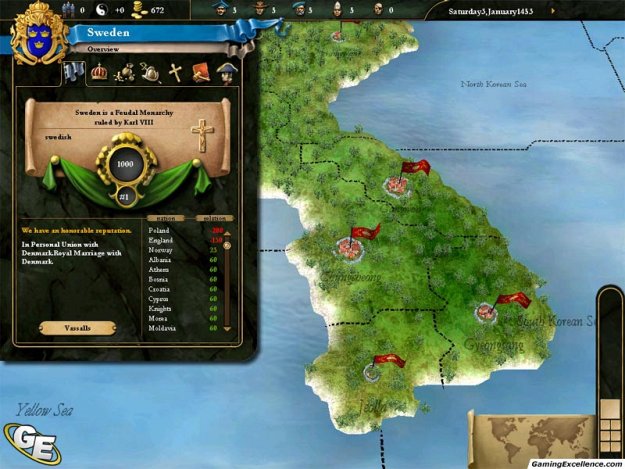 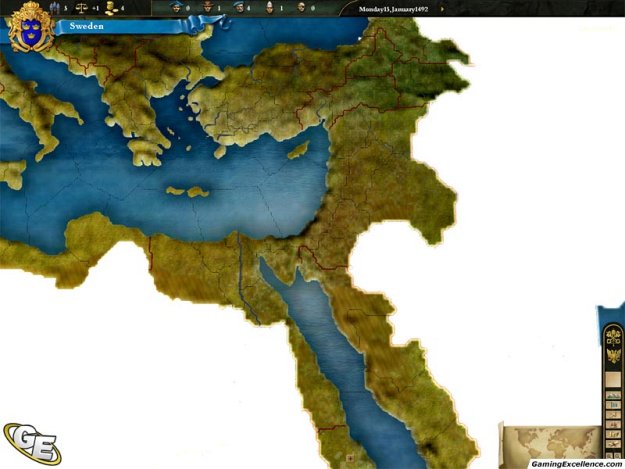 The Europa Universalis series has proven to be top-notch when it comes to strategy gameplay. Embroiled in historical battles, politics, and realism, the series has been quite the proving ground for strategists. At the same time, though, it successfully pushes away all of those who wish to play a strategy game that doesn't require a week of learning just to understand the interface. Europa Universalis III, the latest instalment in the series, does a good job of presenting the game in an approachable manner. Still, it's not perfect.

For those new to the series (which might be a fair amount of you), EU3 is a pseudo-real-time strategy game based between the early 1400s and the late 1700s. It gives you control of a nation with which to do as you wish. One of the appeals of EU3 is the open-ended feeling that you get when you begin a game. It's possible to become a major military power in the region, using France or Spain; it's also possible to pick a tiny nation and merely win over the markets in the area. In addition to these, there's the presence of the Holy Roman Empire and the Papacy for you to control, extra goals in the game to complete. Of course, there's also the prospect of diplomacy, and what that can bring to the table.

The diplomatic nature of Europa Universalis goes far beyond the typical 'War-Allied-Neutral' fare that most RTS games employ. With each nation, you can set up multiple forms of 'friendships', from the simple agreement not to compete with your merchants, or the concept of a military alliance. An alliance is important indeed, as it may seem easy to merely attack the neighbouring country with only one province but if they're allied with a major military power, you're going to be in trouble. These webs of diplomacy extend far into the game's features and really make you think, especially for the more combat-oriented of us.

Declaring war is probably one of the more complex things to do, believe it or not. First, one should have Casus Belli, a reason to begin the carnage. This can range from having enemy troops in your territory to simply being insulted. While declaring war without this is possible, your nation is going to take a hit to its stability, as is your reputation. And if your allies don't like what you're doing, it's likely that you won't have allies for much longer. It makes the gameplay a lot more beyond 'build as many units as possible and attack', and for that I'm quite glad.

There are also layers of strategy in how you govern. Firstly, you can change a number of sliders that determine what your government is like. Are you more inclined towards quantity, or quality; serfdom or free men? A number of these choices are available, and leaning towards either side gives you benefits but also means taking hits in other areas. Moving the sliders can be done only once every number of years (depending on your type of government), and each movement causes a hit to stability. National ideas also govern your country, a number of directions that your nation as a whole is taking, such as colonization of uncharted territory or attention to church. You can even go so far as selecting an idea that allows you to declare war without Casus Belli on anyone of a different religion than you.

Starting a single player game means choosing a starting year, where the nations and borders all start out pre-determined by history. While the game recommends the powers of the time for you to choose, you can also pick one of the smaller nations. From there, it's all left to you to do what you will with history. The AI opponents generally will not follow specific goals (as they did with previous titles), but are better at freely reacting to the current situation, and do a good job of acting like nations in their position would. If single player doesn't do it for you, though, there's always the 32-player multiplayer mode.

New to the series is the inclusion of a three-dimensional engine, one that does a good job of showing all the information you need to see. If there's something happening in a particular province, it'll be represented by an easy-to-see model. The game's interface is a little confusing, but a tutorial does guide you through many (not all) of its features, and it's easy to quickly pick up what everything means. Round it all off with a really good soundtrack, and you'll find that the general experience is enhanced by all of these elements.

If you're looking for a deep strategy title, then Europa Universalis III is likely for you. With its improved interface and tutorials, it's possible to lose at least a few hours in the game even if you're not an enthusiast of the genre. With the wide-open goals available to you in every time period, you'll probably lose a whole lot more than that. A rich strategic title with a bevy of options available, Europa Universalis III is a great game for those looking for a little strategy to their history.