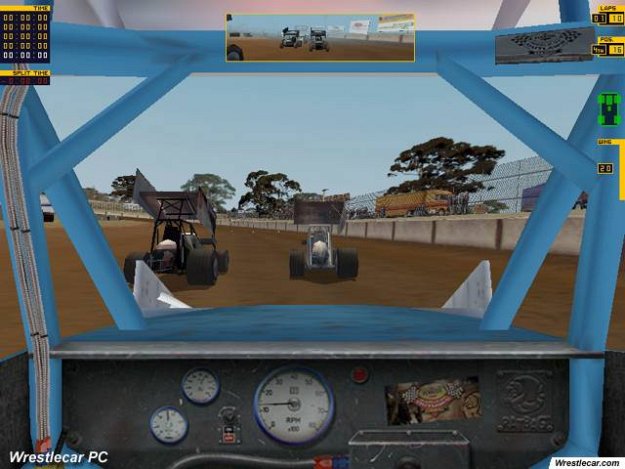 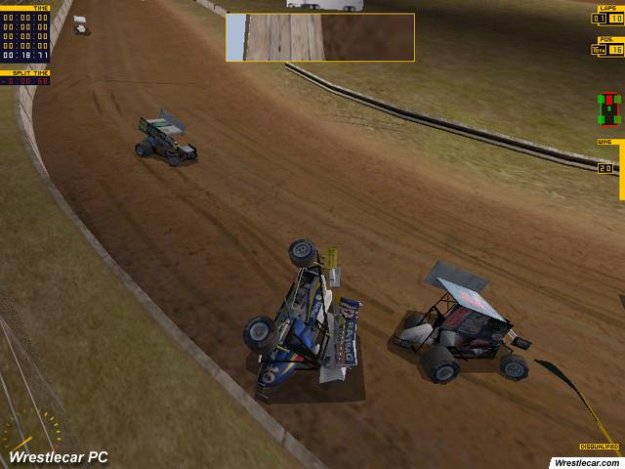 If you have ever visited a local dirt track, or any local short track for that matter, you know the thrill of the loud engines and fumes in the air as the driver's battle for position, and the inevitable crashes which arise from the hard racing. Step into Ragbag's newest title, Dirt Track Racing: Sprint Cars, and you will feel right at home.

Dirt Track Racing: Sprint Cars, henceforth known as DTRSC, features 16 drivers and 19 tracks including Eldora Speedway and Knoxville Speedway. For those who are not familiar with this series, it is a Dirt Track racing series that is largely popular in North America. The World of Outlaws series has grown in popularity over the last few years because of the great competition and spectacular crashes.

DTRSC is very similar to its predecessor Dirt Track Racing, but an updated physics engine and an all-new damage model are the largest changes. Several Sprint Car games have been released as of late, but nothing comes close to the precise physics of DTRSC. A thin manual, and no jewel case are a big hit to the presentation area of the game. The manual includes some general tips to using the garage area, as well as how to use some of the features included in the game. The navigational menus look good, and are very easy to navigate. Loading times were good, and it only took a few seconds to go from the navigation screens to entering a track and beginning a race. The physics engine presented in DTRSC completely makes up for the thin manual.

The physics in DTRSC are top notch. If you have never driven a dirt car before, which is most likely, it will take some getting used to driving around corners completely sideways. Make contact with a wall and the car will barrel roll, with fenders digging into the mud sending you into a spiral. Touch another cars wheel at speed and find yourself upside down in the middle of the track. Although I have never driven a sprint car, or any dirt car before, we can get a general idea of what it feels like, and the feeling is similar to that of driving on ice. If you are into dirt cars, or just want to drive your heart out, then DTRSC is definitely a choice for you. We discovered very few problems with the physics engine, but did encounter one minor issue after several hours of play. If a car is at a very high rate of speed and becomes involved in a wreck, sometimes the car will roll hundreds of times before the game marks the car as wrecked. This is not correct, and I have never heard of any car rolling a few hundred times in my entire life. Besides this glitch, which only affected us on rare occurrences, the physics are simply incredible.

DTRSC includes a garage area where players can modify a lot on the car. Although this is more for the experienced simulation racer, it is an excellent way to perfect the handling of the car to match your driving style. Many of the features seen in the garage were completely new to me, and I had no clue what each did. However, after about an hour of tweaking the setup, you get a general idea of what the main features do and how they affect the handle of the car. Ragbag has done an excellent job on the garage. Also, DTRSC features a race replay feature. This is good for what has been implemented , but could be improved as it has limited camera views and is very hard to find a specific spot on the replay, without viewing the whole race. Overall, it does an adequate job, but could be improved.

If you have ever wanted to operate a Sprint Car team, or any race car team for that matter, DTRSC will appeal to you. A full featured career mode has been included, where good finishes are rewarded with sponsership opportunities. The more income you recieve, the more you can afford to improve the specifics of your car. This feature is very welcome, as few, if any racing simulations have included a feature such as this before. 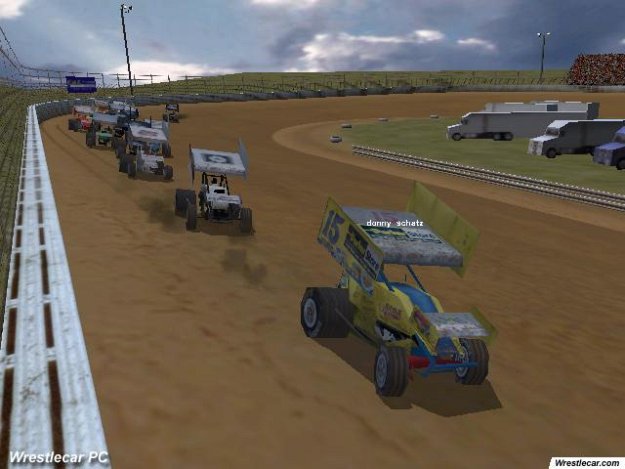 The graphics presented in DTRSC are very similar to those of its predecessor. The tracks are very precise, and the car model is very detailed. The graphics could be improved, as there is several minor clipping problems, although nothing which affects the overall playability of the game. The in-car view is good, and very realistic. The details on the tracks are outstanding, as the infields contain trailers and several small buildings, while the outside of the track is decorated with stands and trees, as well as billboards. The graphics appeared smooth, and on a mid-range video card, we receive very good framerates with all graphics turned to the top and a resolution at 800x600. Ratbag is the master at keeping resources low, while also delivering excellent graphics. Although very similar to its predecessor, the graphics are still very good, with few graphical problems.

The sound in DTRSC is one aspect of the game that is seriously lacking. The engine sound is very good, but that is one of basically only a few sounds really noticed, the others being those of crashing and the announcer. The crash sounds are good as well, but the announcer is extremely repetitive, saying the same thing at the beginning of every event. When a crash occurs, he says one of only a few sayings included within the game. The motor and crash sound effects are good, but a larger variety of sounds would improve the title significantly.

The artificial intelligence of the opponents in DTRSC is almost the same as found in its predecessor. They have not been improved much, if any. The AI in Dirt Track Racing was very good, as they will race side by side, and this is the same in DTRSC. The computer opponents crash with each other quite often, and it is not uncommon to discover a car barrel rolling in front of you. Cut an opponent off, and they will often bump you in the rear resulting in a wreck. Overall, DTRSC features excellent artificial intelligence in its opponents, even though it is the same found in DTR.

Multiplayer is one of the most important features in a racing simulation, or so it has appeared as of late. Using GameSpy Arcade connection software, provided on the DTRSC CD, up to 10 players can face off against each other in a race to the finish. GameSpy is a great tool which allows players to join a race without being required to know an IP, common in many newer titles. 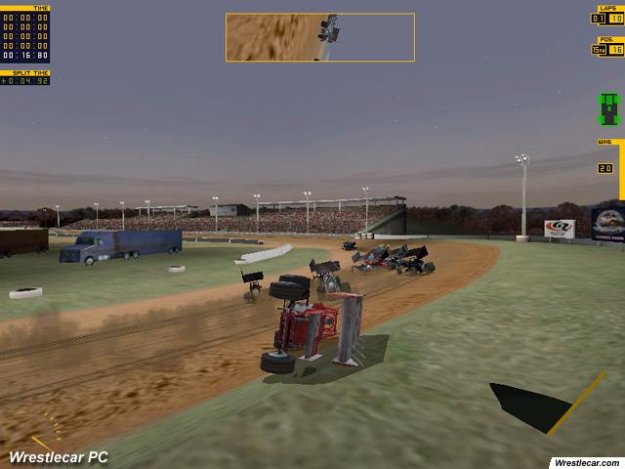 The damage model found in Dirt Track Racing: Sprint Cars has been improved significantly from its predecessor. Damage was virtually nonexistent in DTR, but is clearly visible in DTRSC. If you roll the car and land on your wheels, the whole top wing on the car will be a crumpled mess, completely un-repairable. If you should happen to bump the wall or another car with the front of your sprint car you will certainly know it, as the car will not be able to get up to speed. Hit a wheel, against a wall, and don't be surprised to see it go flat, resulting in a spin and you receiving the black flag. This is one area where Ratbag has made significant improvements over the original DTR, and the great damage model makes the game play much more enjoyable.

Ragbag's first racing simulation, Dirt Track Racing, was an excellent game, but was not overly popular due to the low popularity of Dirt Racing at the time of its release. With the growing popularity of Sprint Car Racing, and the outstanding physics engine, DTRSC is a great success for Ratbag.