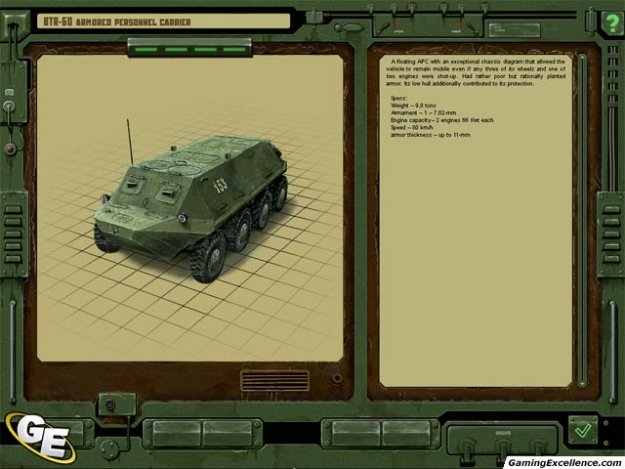 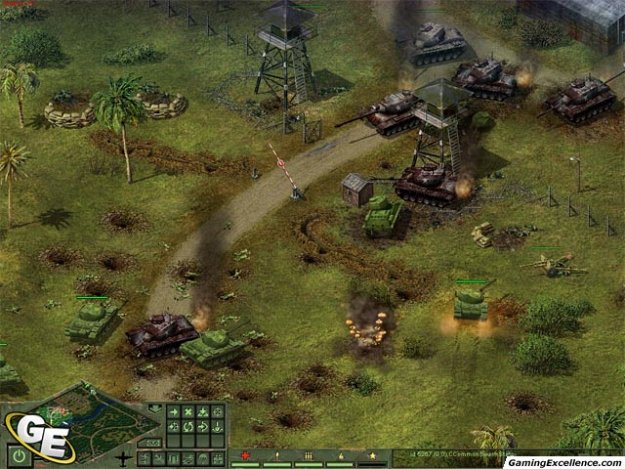 Despite the game's title, this is not a game about the Cuban Missile Crisis. G5 Software has managed to take what could have been a solid turn based game and made it into an awful real time strategy game. There are no Cubans and there are no missiles. The only crisis is the one that the gameplay is in. Simply put, this game is an un-enjoyable mess. You will be commanding the forces of the 1960's in a battle for supremacy over the nuclear ravaged landscapes after World War 3. That is correct; you have missed out on the Cuban Missile Crisis and the Third World War and must fight over the left over scraps of civilization. The military super-powers, the European Alliance, the Anglo-American Alliance, USSR, and China decided that after nuking each other for a couple years, it would be a good idea to ban nuclear weapons and then continue fighting with conventional weapons.

At your disposal on the real-time battle field will be variously sized tanks, artillery, APCs, and infantry squads. They forgot to include air units though. Planes are conspicuously absent from the campaign, although when it begins to rain you are reminded that these unfavorable conditions will keep your non existent air force on the ground. Even the tutorial makes no mention of planes.

That may just be another fault of a sloppy tutorial. The first hint that you are not playing an A-list game is the fact that you are instructed through small barely readable text that continually pops up, but this is not the worst part. The person whose job it was to translate the game from Russian to English did a really poor job. Typos, misspelled words, and sentences that just don't make sense are common, which makes an already confusing game and cluttered interface even harder to understand.

You have options on infantry formations, what kind of shells to load into your artillery, build defensive positions, ambush modes, laying mine fields, unit facing, and building bridges. You also need to keep your army supplied with ammunition and fuel by ordering your support trucks to do so. There are many little tiny buttons that you will probably never use. All these options are nice, but better suited for a turn based strategy game. The players' attention is constantly needed to control the dumb units.

You do not build new units or receive reinforcements while in the real time battle map. So when your tanks get blown up, that's all you get. In this, the game is very unforgiving. There is a larger turn based campaign map where your objectives appear and where you can form more armies and buy more units. Moving your armies around the campaign map you will encounter enemy armies, or attack opposing defensive emplacements defending radar stations, refineries, and factories. Supposedly capturing these facilities will allow you to build bigger and better units. The problem is, as the attacker it is nearly impossible to beat the defender.

I spent hours in frustration trying to take enemy cities and refineries, only to have my entire force wiped out. It seems like the AI has a better line of sight, as often my forces were being shot at by tanks and infantry who they could not see. The two victories I did secure as an attacker were only accomplished through the very slimmest of margins. A trick I learned is that when your support trucks get blown up, you will get more as reinforcement's seconds later. That makes support trucks the best scouts in the game. I discovered later that it is preferable to be the defender when one of my locations was under attack.

The computer automatically sets up your defending forces in an optimal configuration, through which the AI opponent must crash through. While it felt great to destroy the attacking forces fifteen tanks (my total army in the field was made up of fewer tanks) I didn't really issue any orders and just watched my entrenched infantry slaughter the oncoming army.

The units in the game have bad path finding and often get stuck on each other or will just refuse to move. Often I ordered a unit to entrench, only to receive a defiant, "No Sir!" with no reason as to why they wouldn't throw up some sandbags. There is an auto-resolve combat button; but pushing that just means that you lose.