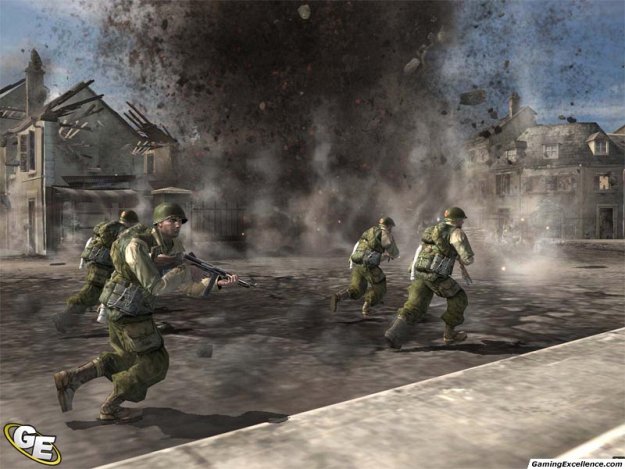 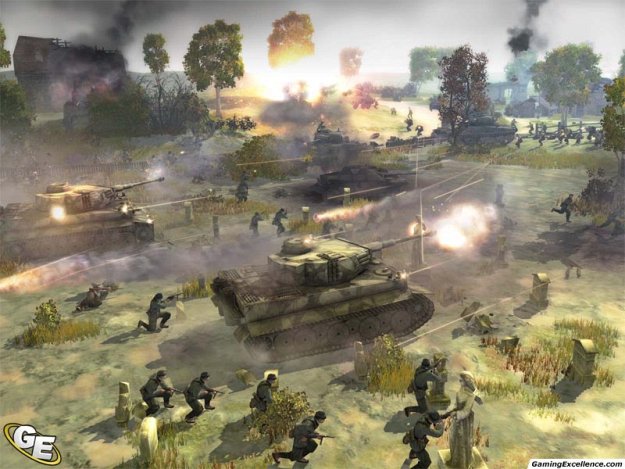 Men know that wars are not won by one solider alone. It is the combined acts of many, working together, that bring the battle to an end. Similarly, victory isn't achieved by sending soldiers blindly to their deaths; it's accomplished by making the right choices, recognizing tactical advantages, and deploying your resources strategically.

Such is the message in Company of Heroes, the latest real-time strategy offering from Relic. You are placed in command of a small army of soldiers, ready to fight against the enemy in this World War II game. Instead of the standard one-man army seen so often with WWII games, Company of Heroes places a heavy - and I assure you it is heavy - emphasis on the strategic element of warfare.

Anyone who has played the Dawn of War real-time strategy games by Relic will already be versed in the primary paths to success in Company of Heroes. For those that are unfamiliar: instead of the standard RTS formula that has you 'mine' for resources like gold and whatnot, in CoH you must instead capture specific points on the map- so-called resource points - by sending certain units to them. There are three kinds of points, each pertaining to a specific resource at your disposal. When you capture and hold these points, you gain a continuous stream of that particular resource. In other words if you lose the strategic point, you lose the income.

In terms of gameplay, this means players can no longer simply amass their forces behind an impenetrable wall. Instead, fortune favors the expansionist commander, and it's up to you to capture and defend as many strategic points as you can to maintain the upper hand. Personally, I prefer this kind of method since it solves problems such as running dry of resources to mine, and it also forces you to think about how to defend both your base as well as your resources scattered across the map.

One aspect of the game that may be jarring to some is the heavy emphasis placed on unit management. Buildings are relegated to a relatively minor role as there are only four primary buildings: those used for creating the units that you fight with, some defensive structures and one or two other structures that serve specific purposes such as healing units or producing upgrades. That's a good thing, considering that it affords more time to concentrate on the unit battles, which are far more in-depth than I've seen in most RTSs.

There are three primary types of units in CoH: infantry, light vehicles, and tanks. What makes the game so good, however, is the way that they all interact with each other. Some infantry are good against tanks (comparatively speaking), while others devastate enemy infantry. Similarly, some tanks can destroy other vehicles with ease, while others can just tear holes in advancing armies of men. Success is determined not by sheer numbers, but rather the breakdown of those numbers and how you use the individual units in conjunction with each other. For example, an advancing group of tanks might look troublesome at first, but if you meet them with anti-tank guns they'll easily be fended off. If the enemy decides to reinforce with some infantry, a few heavy machine gunners, once deployed, will absolutely tear them apart. Scenarios like this are what makes this game so strategic: out-thinking the enemy, and countering what they might send.

Another great feature is that you're not forced to rebuild waves of units that have been recently destroyed. Each squad of infantry (with the exception of snipers) come in groups of anywhere from three to six. Put them in battle, and sooner or later than number is going to start to decrease until there's just one bewildered soldier out on the battlefield representing his squad. Instead of throwing him into a suicide mission, a far cheaper way to get back an army is to send him to base and and reinforce him, thereby replacing the fallen men with new recruits. This allows you to keep veteran squads alive (since they earn bonuses) and helps you feel like each troop is actually worth more than just cannon fodder.

One of the most important parts of this game is the environment. The real world is not flat, and neither is the battlefield in this game. It makes sense that if you hide behind a wall, bullets shouldn't hit you, right? Well, that's reflected beautifully in CoH. The realistic terrains you fight on will see heavy battles turn a small farming community into a pile of rubble. Units can hide in buildings, only to have chunks of the building blown away to expose the gunners within. Destroyed tank shells can be used as heavy cover against a nearby machine gun, and even a low stone fence can offer you an advantage over the enemy's open position. Instead of having units walk up to each other and firing, your men will be dodging left and right, finding places to take cover from the attack. Just remember: your enemy can duck and cover just as well as you can.

The AI is not always perfect, though. There will be times when the game will go misinterpret your intentions in order to do what it thinks is correct. For instance, you may want a squad of infantrymen to rush forward in an attempt to quickly take out a machine gun nest low on health. The game will sometimes refuse to do that, and will instead have them retreat to the safety of the cover. Likewise, working with squads rather than single units presents its own set of problems. Moving individual units is no longer possible as you can merely specify a general location and the squad will gather around it. While this split-second difference in timing may not seem like a lot, in reality it can mean the difference between life and death when a grenade has just landed next to your unit.

Another aspect of the game is what kind of company (or 'doctrine', if you play as the Axis) you choose to command. As you destroy units or capture resource points, you'll gain experience as a commander. Gather enough experience, and you'll be able to spend it on new abilities such as parachuting in a squad of paratroopers, commencing an off-map howitzer barrage of a point, and sending in reinforcements on foot. The single player campaign places you in command of famous companies such as Able Company and Dog Company in the days following D-Day, when the beaches of Normandy were stormed by the Allies. There are only sixteen missions, which may seem a little short, but each mission takes a fair amount of time to complete. You'll be given standard objectives - defend this, attack that - which are varied enough between the missions to keep gameplay interesting., The game also features secondary objectives that the player must go out his or her way to perform; upon completing these, each mission offers tertiary objectives that can win you a medal for going above and beyond the call of duty. These medals don't serve any purpose other than providing the player with bragging rights, but they definitely enhance the replay value.

What will really have you playing the game over and over again is the multiplayer mode. First off, there's the skirmish mode that pits you against computer-controlled players, which is all right; but nothing beats going up against human players who are constantly trying to outthink your every move. The biggest problem with multiplayer is the limited set of options, maps and scenarios. There are only two teams allowed on the battlefield at any one time (no free-for-all) and one side must always be the Axis, the other the Allies. There are two modes of play: annihilation, where you must completely destroy your opponent, or point capture, where you compete against the enemy to capture special strategic points scattered across the map.

In sum, Company of Heroes is by far one of the best RTSs on the market to date. With a heavy emphasis on tactics, cover, and unit management, the game compels players to think strategically and not just send wave after wave of units to their death. While many games have tried in vain to strike a balance between deep strategy and enjoyment, it appears that the developers behind CoH have found the magic formula.