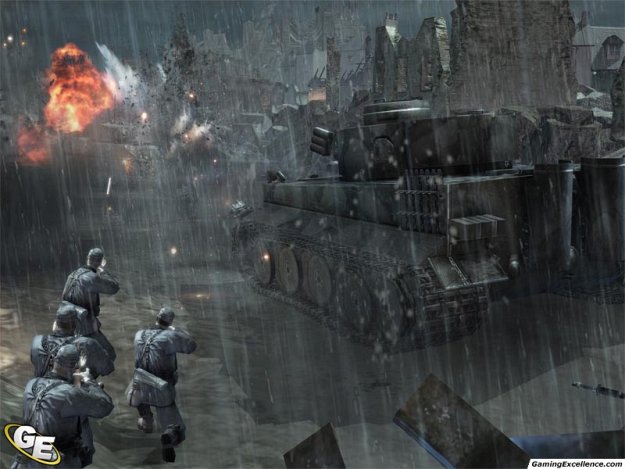 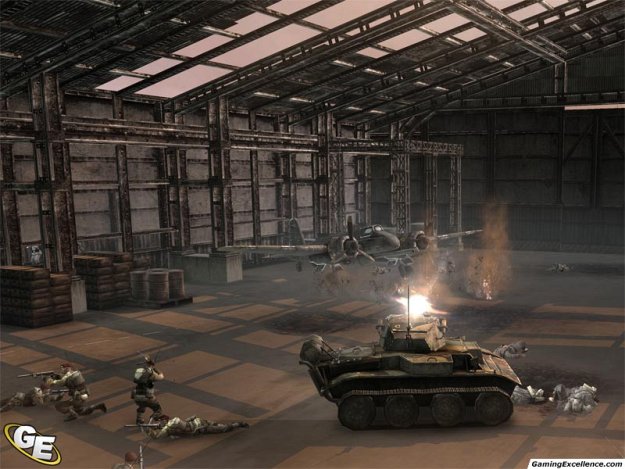 When Company of Heroes was first released by Relic, it was praised by critics and fans alike, and was generally thought to be the best real-time strategy game ever created. Despite being set during World War II, a period that, in videogames, has been done ad nauseam, the game created a unique experience that combined deep strategy, unit management, and, most importantly, fun. Of course, the question then arises: where does the series go from there?

Opposing Fronts is Relic's answer, a standalone expansion to the original title. Entering the fray in this expansion are two new groups, the British and the Panzer Elite. Along with them come two campaigns to play through and a whole new way of playing. And though the title fails to do anything more revolutionary than its original, it still creates a brand new experience that makes you rethink how to fight on the plains of war.

But first, the new playable groups. What Relic has done is, instead of merely adding duplicates of the American and the German groups they've added two forces that play completely different from them entirely. Let's start with the dogged British. Perhaps the most unique thing about this force is that the base is a completely mobile series of trucks, able to drive around the battlefield. In the British you have a force that specializes in digging in and staying there, creating defensive positions that are murder to assault. Digging trenches, quickly setting up machine gun nests, and forming medic stations are a task that any soldier in the British army can do. In fact, slow progression up the map, setting up defences and then moving forward, inch by inch (while supported by powerful artillery), is what the British do best.

The Panzer Elite, on the other hand, are built on speed and quick skirmish capabilities. They center mostly around vehicles, as every one of their infantry units is able to repair vehicles on the field. Their halftracks can also carry personal to any part of the battlefield, and these come with open tops, allowing the infantry inside to shoot out with their equipped weapons. This allows you to engage in highly diverse vehicular tactics, as infantry with rocket launchers stored in a halftrack can turn it into a mobile tank destroyer, or equip some infantry with machine guns to mow down opposing forces on foot. Additionally, as units attain veterancy, you're given the option to improve either offense or defence for that unit, a boost that is not unnoticeable.

The strategies that these two forces excel at are complete opposites from one another: using the British means adopting a defensive strategy, fortifying the land you own while slowly pushing forward. Conversely, the Panzer Elite race across the field, but aren't very good at defending points, so more often than not you'll be racing to stop enemies from capturing points that you drove away from moments before.

This does have a downside, however. With these new strategies available, the whole game just got a lot harder. While I'm sure there are RTS fans out there jumping for joy at this notion, this does not bode too well for the players new to the series. The general simplicity prevalent in the previous titles loses a bit of itself when, instead of letting the AI of the units handle most of the details, you're forced to micromanage. Whether this takes the form of having to manage the veterancy of every unit under your command in the Panzer Elite, or making sure that Lieutenants and Captains, attachable units that boost squads' abilities, are attached to the right squads and not getting killed, micromanaging is much more prevalent this time around in Opposing Forces.

To get you into the experience, the game provides two campaigns, one for each side of the war. The first takes place on the German front as you control the Panzer Elite in defeating the failed Operation Market Garden. The second gives you control of the British as they make their way into the French city of Caen in the days after D-Day. Each campaign is pretty good, though the German campaign does feel much more scripted than the British, forcing you to react to events rather than allow you to win the battles your own way. Each battle gives you objectives and side missions that, while not necessary, usually make things easier as well as award you a medal for each mission.

The sound and overall presentation of the title is, as before, excellent. Each weapon has a distinct sound, allowing you to know what's happening even when across the battlefield. Voice-overs, both in cutscenes and the midst of battle, are top notch and full of variation: instead of hearing the same British or German voices over and over again, you can hear slight variations like the differences between an 'upper class' mentioning tea and the more colloquial 'f-ing wankers' of the cockney speakers. The same is present with the German, and this small attention to detail really brings out the polish of the game.

One of the larger issues with the game that a lot of players might not enjoy is the fact that Relic forces you to get an online membership and sign in with it every time you want to play the game. This includes just playing the single player campaign or a skirmish. When offline, the game checks the disc to verify itself, at least. While understandable if you want to play a multiplayer game, requiring the player to do this even for a single player experience just seems a little over the top, and it seems like there have been a couple issues related to the digital distribution front and verification servers.

Company of Heroes was definitely a brilliant title, and Opposing Fronts does well in adding to it. With the ability to play two completely new forces in the war adds a whole new level of depth to the title. While newcomers to the series should definitely get acquainted with the original title before delving into the strategy of this one, Company of Heroes continues to be one of the best RTS experiences on the market to date.