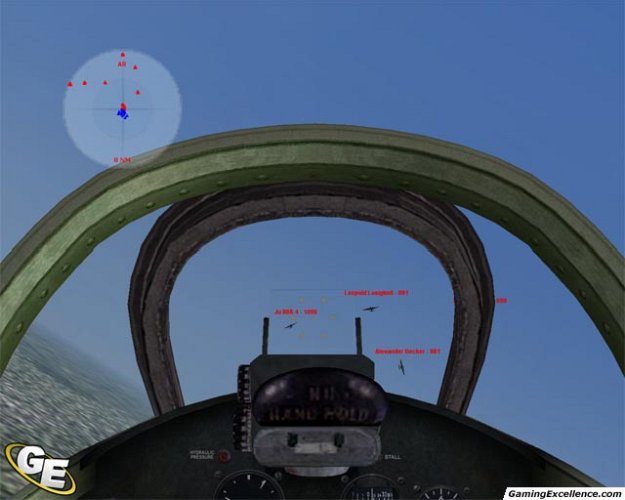 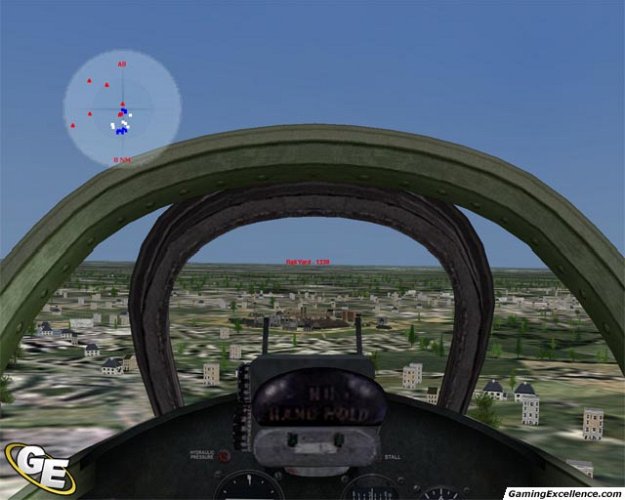 The year is 1943; I'm stationed in Northern Europe, flying tactical air strikes against German air bases. I have no idea when this war will end and I will finally be able to return home, but at least I have the opportunity to serve my country.

Welcome to Combat Flight Simulator 3: Battle for Europe. This is, quite obviously, the third title in Microsoft's wildly successful combat flight simulation series, set during World War II. This time around, you have the choice of playing as an American, a British, or a German pilot during the peak of the tactical air period of the war. The first priority on your mind is saving your own behind, followed closely by the successful completion of your missions. (As a side note, at first I had a hard enough time protecting myself from enemy fire and keeping my plane in the air that I did not even consider the possibility of destroying the enemies who were firing upon me.) However, there is always that thought in the back of your mind that you might, and I emphasize might, successfully turn the tides of war for the better.

And this is precisely what Microsoft has allowed you to do. Not only does the outcome of your missions affect the movement of ground troops through France, but the quality of equipment available to you and your troops varies as well as potentially the outcome of the entire war. This is your chance to either replay or rewrite history as we know it.

The play modes in Combat Flight Simulator 3 are divided up as follows: quick combat, in which you can jump into any of the available flight types and test or hone your skills; single missions, including historical, hypothetical and training; the campaign, which plays from a point in 1943 when the Germans control most of Europe (Fortress Europa) and the Brits and Americans begin the Allied invasion; and multiplayer, where players can fight each other or join forces to complete cooperative missions together over the internet or a LAN. Available flight types include free flight, dogfight, intercept, escort, and ground attack.

Of these, the most rewarding and interesting by far is the campaign. As mentioned previously, the Germans have control of Europe. As the Allied forces, your mission is to take the one million troops stationed in Britain and invade the beaches of Normandy, pushing the Germans back to eventually capture Berlin. As the Axis, you will be attempting to stop the Allied invasion in their tracks, drive them back to the sea and capture London. However, neither of these is a task for any one single man. The war was fought by groups of courageous men fighting together, and thus, so are these missions. Pilots are able to issue orders to their wingmen, order a strategic ground offensive and much more. One of my favorite features of the game is the ability to warp to the next action sequence. Not too interested in flying long, boring stretches between your current location and your impending target? No problem. A single key press will take you there in a jiffy.

Alright, now it's time to discuss some of the basic features of this game. The countries included in the missions and campaign include Belgium, France Germany, Great Britain and the Netherlands. Pilots can fully customize their aircraft before embarking in battle, including choosing the paint for the nose, fuselage, wing and tail, creating their own unique identifier, selecting their fuel levels, ammo levels and ordnance. Also featured are three real pilots from each country involved, complete with background information. Or, to make it a more personal affair and to cement your involvement in this historic event, you can create your own. This is where the role-playing elements come into play. Players can earn medals for their efforts, skill points (towards vision, g-tolerance and health) and a wealth of statistics are accumulated (bombing, rocketry and gunnery accuracies, air, ground and ship kills, successful missions completed, crash landings, bailouts... well, you get the idea).

So, what kind of aircraft can you expect? Well, there are 33 available in total for the RAF, Luftwaffe and USAAF combined. These range from multi crew medium bombers, to single or dual seat fighters or bombers. Some of the more memorable ones include Spitfires, Tempests and Typhoons. As for what one can expect on the ground, basically anything and everything. I counted 49 different ground vehicles, ranging from tanks, to ambulances, to rail cars. Ground weapons that I've seen (much to my chagrin) include flak towers, howitzers and many other nasty anti-aircraft weapons. Let's just say there is no lack of detail in this game, or historical accuracy for that matter.

Alright, now I would like to take some time to outline my background as an in-game simulation pilot. Although I have not had the opportunity to play either of the previous two games in the Combat Flight Simulator series, I have very recently had the enjoyment of piloting a wide variety of civilian aircraft in the latest installment of Microsoft's other popular flight simulation series, Flight Simulator 2004: A Century of Flight.

At first, I struggled through pilot training exercises, increasing my knowledge of the instrument panel and critical flight maneuvers. Basically, I could successfully take off, fly around clumsily for as long as the aircraft's tank would allow, but lacked the crucial ability to land the plane (without causing hundreds of thousands of dollars worth of damage and bodily harm or death). Fortunately, I quickly honed my skills and, although I am not a professional by any means, I still consider myself well above the average.

My point is, that for those of you familiar with either series, there should be no problems whatsoever in keeping your aircraft afloat and on-course. For any new-comers however, I say this: patience is a virtue. And have lots of it. It will be extremely satisfying and worthwhile when you beat the learning curve, but it can be a steep slope to climb. Remember, Microsoft's goal is to be "As Real As It Gets".

Which finally brings me to discuss the graphics and sound of Combat Flight Simulator 3. First, the graphics. As per usual, Microsoft has strived for excellence. And they have succeeded. Not only is the level of detail of the aircraft, both outside and inside, simply amazing, it is also about as accurate as you can get without actually looking at one of these planes in a museum. Yet again, Microsoft has used real veterans who flew in World War II as historical advisors to ensure no small detail goes unnoticed. That also extends to all weapons and vehicles on the ground, as well as the rest of the terrain. While flying over densely populated cities, at the risk of being gunned down (it's worth it), you may want to drop down to a few hundred feet and decrease the throttle to take a quick peak. I guarantee you will be amazed. However, this level of detail may also come at a price of decreased performance from the other, more remote, locations. All in all, most players will not notice it if their systems exceed the recommended requirements.

But what kind of sound effects can be expected, you ask? Anything and everything. If there is only one aspect of this game that can be singled out as the main source of realism, it would definitely be the sound. Of course everything else is still great, it's just you have to hear it to understand. Everything you would expect to hear in an aircraft is present, but it's the other, more subtle, effects that Microsoft has incorporated that make it stand out. For instance, not only can you tell the difference (just from listening) between a propeller plane and a jet engine, but you will also grow accustomed to distinguishing between sources of enemy fire, and possibly even different types of aircraft (medium bombers vs. fighters for instance). Damage effects, guns, bombs and other sounds all add to the sense of urgency and danger of the game. However, I also highly applaud the in-game music for setting the mood. It is always appropriate and never overpowering, simply put: it's incredible.

Another one of my favorite aspects of this game, although not really part of the game at all, is the abundance of information it provides. From the campaign briefings to extra handbooks on the CD, it's a highly recommended read. Some of the most noteworthy articles (in my opinion) include the "Flight School", "Machines of War" and "Understanding the Tactical Air War" handbooks. Oh, and don't forget to check out the official website for many other goodies if you are a history buff (and have a few minutes between missions).

Alright, well now that you know all the fine details, I recommend you go buy this game. If you like any of the other flight simulators, you will love this one. However, if you are a new-comer and have little patience for learning complex controls for aircraft, or are looking for a fast-paced battle, this may not be for you. Movement is a little slow, and more attention has been paid to reproducing a life-like experience. Which is far from a bad thing. Microsoft has attempted to cram as much as possible into this title to give players the most exciting and realistic title to date. And they have succeeded.