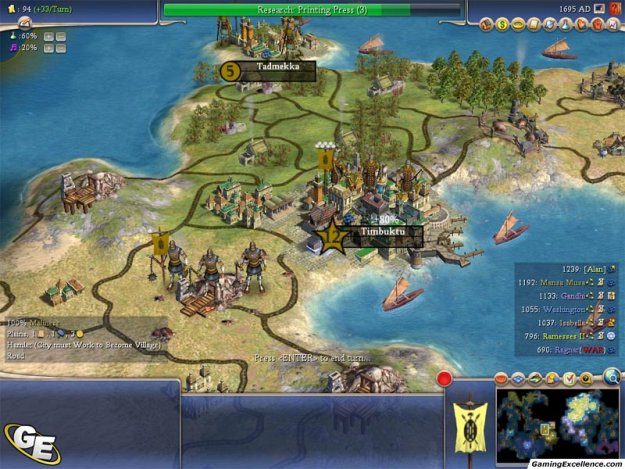 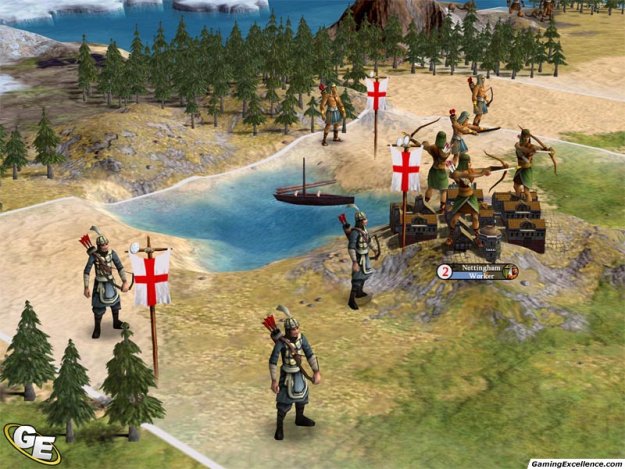 Warlords is the must-have expansion for Friaxis' wildly fun and addictive Civilization IV. Once you have played just one game with the expansions new units, leaders, and building you will never want to go back to playing the game without them. While the changes are mostly minor the game has been tweaked to make an already great game even better.

Here come the warlords. A civilization can produce great artists and engineers but occasionally a great general will be born to lead his people to victory. Just like other great people a great general can be used in a number of ways, to boost military production in a city or become a warlord and give units a boost in experience and combat upgrades. Warlords are gained through your units gaining experience in combat. Win enough battles and a great general will be born in one of your cities to further your conquests.

It is easy to become emotionally invested in your warlords, their many upgrades mean they become veterans of many battles so they'll be around for a long time. You'll cheer them on with every city they conquer and cry out in agony as they fall victim to the spears of the enemy.

Another great addition to the game are the new unique buildings for each civilization. As the Roman legionary replaces the swordsman the blank replaces the blank. These new buildings give slight bonuses but are perhaps one of the best additions in the expansion really making each civilization more unique. Three new wonders can also be built, the Great Wall being the most notable. Upon completion a wall is erected on the borders of your civilization and barbarians can no longer enter your lands.

Be prepared to meet some new civilizations as you play the game. Old favorites like the Celts, Carthage, Korea, Viking, and Zulu have been added to the game each with their own new units, buildings and unique bonuses. Also added are new leaders like Winston Churchill, Stalin, and Ramses II, who add their own bonuses to the English, Russian, and Egyptian civilizations.

Warlords adds some new leader traits and balances some of the original leaders. Protective leaders get free promotions for their defensive units, the charismatic trait makes the leader's cities happier, and the imperialist leaders get cheaper settler units in to expand quickly.

Forging a large empire allows you to use the new diplomatic option, creating a vassal state. Through either war or diplomacy you can make a civilization your vassal. They must give you any resources you demand and your diplomacy becomes linked, you will be at war or peace with the same players. This is at the expense of slightly increased maintenance of your own cities, so it is a trade off.

The trireme and the trebuchet are the two new units in the game and they add some excitement to the early combat.

Triremes can be built as an alternative to galleys. While they do not transport units, they are excellent in combat versus galleys. This new ship is good to defend against early invasions and brings naval combat up a notch in the early game.

The trebuchet was added to balance the combat in the medieval era. Where before walled cities with longbow and pike wielding defenders were nearly unassailable, the new trebuchet can blast through walls with alarming speed. It is a much needed upgrade to the catapult and lessons the yearnings of would-be conquerors for the days of gunpowder and cannon.

All of the changes, the new leaders, new civilizations, new units, new buildings and new wonders make the standard game of Civilization IV even more enjoyable. The best content on the expansion disk however, are the new special scenarios that both show off the power of the scenario editor and the new Warlords features. The best of these new scenarios fundamentally change some aspects of the game, like the victory conditions, to make far a whole new kind of game.

In the Chinese Unification scenario religion has been replaced by family bloodlines. The winner of the scenario is successful through diplomacy and spreading the family bloodline or straight out conquest. The artful blending of the two is the fastest path to victory. All of the units in the scenario have had their art redone to give it a Chinese feel and truly massive armies must be marshaled to storm enemy cities.

Another interesting scenario is called Omens. You play as either French or British forces battling to spread their religion and influence among the Native Americans of the Ohio River Valley. The defensive bonuses of the European units mean that the majority of the conflict will be in the rush for land and the souls of the natives. Whichever side has 75% of the population belonging to their flavor of Christianity at the end of the game is the winner.

For a change from diplomacy and deal making, try out the Viking or Genghis Khan scenarios.

As the Vikings no settlement in Northern Europe is beyond the reach of your longships as you pillage the countryside. Victory is achieved by reaching 75,000 gold before time runs out, so ransoming cities and searching for hidden treasure are often more profitable than sacking every settlement, but burning it all is just as fun.

In the Genghis Khan scenario you control the nomadic warlord as he leads the Mongol hoards across Asia. The Mongols do not begin with cities but with camp units that occasionally produce a unit. The type of unit produced depends on the terrain the camp rests on so strategic movement of the camps, along with proper use of Genghis himself are vital to victory. New technologies are not researched but are found by conquering enemy cities. The greater the number of civilizations you subjugate, the greater your pool of technology will become.

Any fan of the Civilization series will be happy with the expanded gameplay offered by Warlords, it really completes the game. Features have been added without making the core game more complicated. What feels missing are any additions to the late game modern units or buildings. It also would have been nice if there were more scenarios included for the price of the expansion pack.