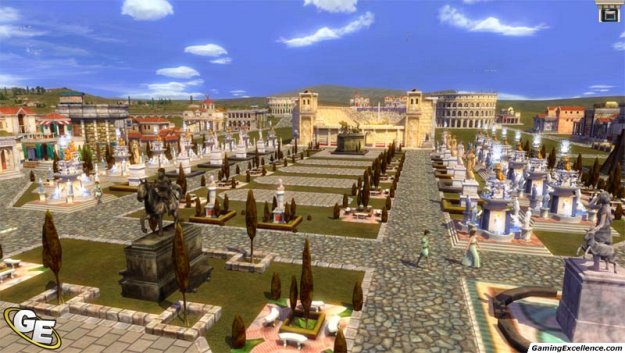 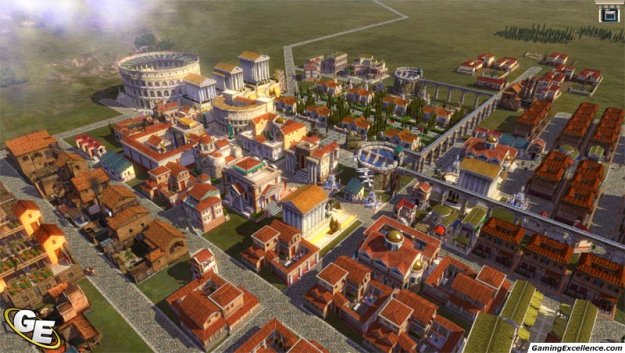 Caesar IV is a fairly unique take on the standard city simulator. While most deal with building placement and macro economies, this game instead forces you to focus on each household, on how happy each group of your citizens are, and how to manage a complex, branching economic system. There's the odd hiccup in the gameplay here and there, but overall, it's still a robust game to play.

I had played the previous Caesar game a while ago, and though it caught my interest, I had pretty much forgotten about the series until I heard about this new version. In Caesar IV, the series places you as a governor in the employ of the mighty Roman Empire. You're to take command of a town, build it up in population, prosperity, and power, all the while staying in good favour with the Empire and keeping the barbarian invaders at bay. Sounds simple, right?

At first, the game seems pretty daunting, but thanks to a very helpful tutorial mini-campaign, the mechanics of the game are explained to you and you're on your way to building a better empire in no time. The rest of the game is divided into two main campaigns, scenarios, and the option to play custom user-added scenarios. The campaigns themselves are divided into individual cities with goals that you must meet such as population, culture, or favour with Rome.

While that may sounds fairly simple, there's a lot to balance. First, you've got different classes of residents. The lower class, Plebians (or Plebs), want little more than a job and some food, which is fine, but you'll get nowhere in a city run by farmers and factory workers. You'll also want Equites, the educated folk, to run your libraries, theatres, and clinics as well. And then you have the wealthy Patricians. They don't do anything useful for the city, but they pay hefty property taxes that'll thicken your wallet. You've got to keep them all happy. You have to provide them jobs (well, not the Patricians), food, water, and goods. Different classes want different things, and the higher you go, the more variety is expected. Sure, a Pleb can get by with well water and grain, but a Patrician will want pumped water, all manner of foods, a variety of luxury goods, and even exotic goods imported from faraway lands. Keeping a tenuous balance between keeping everyone pleased and keeping your wallet filled is what makes the core of this game, and it makes for some interesting gameplay.

But lest we forget about the barbarians. You're out to bring Roman peace to the land, after all, even if it means bringing rebels to the sword. You'll have to build up a military force, which means mining the iron, making the swords, recruiting immigrants, and keeping them well fed. Do all this and keep their morale up, and they'll defend your city against the marauding hordes. Just remember to keep the military buildings to the side. No one likes to live in a military neighbourhood.

For anyone who likes to manage resources, Caesar IV is the game for you. There are dozens of resources to keep track of, everything from the basic resources like grain, olives, and wool, to the manufactured goods like clothing, furniture, and pottery. Additionally, you can interact with other cities in the Empire by setting up trade routes, importing exotic goods and exporting various products for profit. Rome itself will often ask a favour of you, often in the form of resources. While you don't need to provide these resources, failing to do so loses favour with Rome, and should you become too disliked by the Empire, you'll quickly find yourself out of a job.

As stated, there's a lot to like about Caesar IV, but there are a few slight problems too. For one, the military aspect of the game is pretty thin and feels too pointless to be any fun. Military buildings take up a vast amount of space in what is already a limited landscape and they're hideous to boot. Additionally, building walls to keep out invaders eats up space like nothing else. There's also not a whole lot of strategy to the military aspects either. You build a legion, and if your numbers are better than the enemy's, you're probably going to win. Though there are different kinds of legions, it doesn't feel like there is a lot of difference between them, and it generally feels pointless.

The next problem is with the interface. The interface is normally quite good, displaying all the info you need when you click on a building, or showing a list of data when you talk to your advisors. The problems come up when you're trying to construct buildings. When you click on a group of buildings to build, a large list comes up that covers a fair amount of the playing field and it does not go away when you make a selection. So, when you're trying to place a building, you've got an irritatingly large portion of the screen covered up. There's also a problem with building placement, especially on an angle. Sometimes it seems that you're touching a road, when you're actually not, and you might not notice this until much later when you wonder why the building isn't being used.

The graphics are pretty good, and when zoomed out, the sight of a fully-functioning city is quite an impressive sight; watching all the little Romans run this way and that. When zoomed in though, problems with detail become apparent, like the jerky animations that represent working citizens in buildings. Still, it doesn't detract much from the game since there's no real reason to actually play zoomed in that close to the city anyway.

Caesar IV is a fun city-building sandbox game, especially for those that like balancing a myriad of options like space, happiness, budget, resources, and political obligations. The military aspect of the game is weak but, since the campaign gives you the option of playing with a military or economically-based city, this aspect can mostly be avoided. The rest of the game however, is addictive and one of the better city-builders to hit the market.