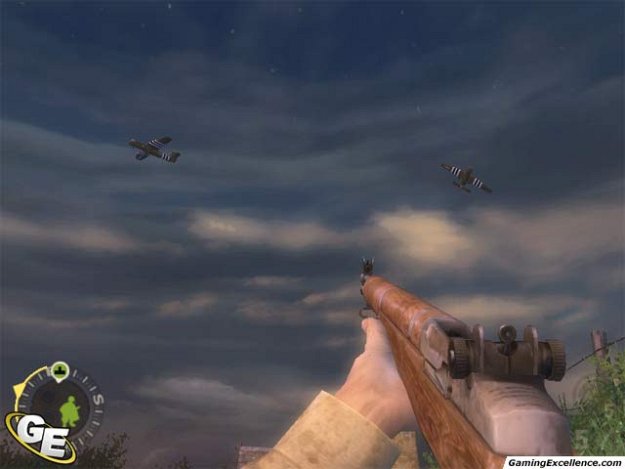 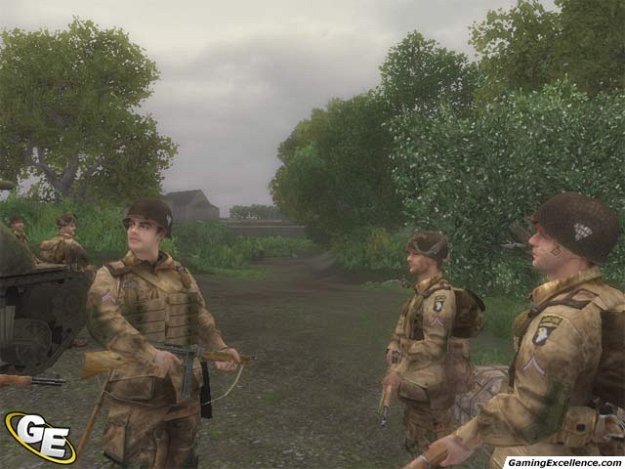 When I received word that I'd be reviewing a WWII shooter a while back, I must admit that my initial reaction was, well, a little underwhelming. I recalled piling into the Cyberland Cafe with a bunch of friends after school for a quick round of Day of Defeat. It was good fun pulverising my school chums, and likely even more fun for them since I wasn't particularly adept at the game. But that was pretty well the extent of it: point, shoot, run; if you were any good at Quake, the learning curve was zilch. Seven years later, the genre has certainly progressed. Created by the renowned Gearbox Software (Halo, Half Life: Counter Strike) and published by Ubisoft, Brothers in Arms: Road to Hill 30 is a rich blend of action and tactics underscored by a captivating storyline based on true events. It also represents the evolution of the FPS beyond childish gun slinging to a more sophisticated model that embraces real-world environments and strategy - a big step forward that is long overdue.

The plot of Brothers in Arms is loosely based on the real-life history of the 101st Airborne Paratroopers who landed in Normandy in 1944. Players assume the role of Sergeant Matt Baker, a mild-mannered man from Missouri who never asked nor expected to be squadron leader. Along with his small group of loyal soldiers, Baker must overcome the odds by battling his way through a series of 17 authentic campaigns that span approximately a week. Each mission is full of challenging scenarios and unpredictable twists and turns that will keep even the most hardened G.I. on his toes. In the course of the harrowing events, players will have an opportunity to command several groups of soldiers as well as an M5A1 Stuart light tank (complete with a .30 calibre turret-mounted machine gun which Baker can fire).

One striking feature that distinguishes this title from most of the competition is its highly intuitive tactical interface. The first couple of chapters serve to familiarise players with basic functions such as strategically positioning soldiers and flanking enemy infantry. After that, the smooth point-and-click functions make setting up tactical moves a breeze. Want to lay some repressive fire on those Krauts behind the truck? Right click on their position and release. If one is feeling a little more adventurous, an additional left-click will have Baker's men storming Jerry faster than you can say schnitzel. For those particularly iffy moments, the developers have included something called "situational awareness" that allows you to analyse your options without the added worry of dodging bullets and mortar fire. In this mode, the game is paused and players can zoom and rotate their environment to see the layout of the terrain and enemy positions. Players should note, however, that only those enemies whom either Baker or his men have spotted are visible.

Authenticity is another area in which Brothers in Arms excels. Everything from the colour of soldiers' uniforms to the sound of a firing M1 Carbine has been painstakingly researched to deliver unparalleled realism. Using reconnaissance imagery and eyewitness accounts, the developers have accurately reconstructed many of Normandy's famous battle sites. From little stone houses to large Gothic churches, one really gets the impression of being in wartime France. The cast of characters, while not especially endearing or interesting, also contribute to the overall believability of the title.

For those craving a detailed and lush graphical environment, Brothers in Arms does not disappoint. Characters, vehicles and buildings are all exquisitely rendered using high-definition textures. Gazing across farm fields, one can see far into the distance with amazing clarity - definitely no cheesy "fogging" effects to be found here. Lighting is a more nuanced element in this game since most of the action takes place outdoors. Still, the long shadows and technicolour sky during dawn and dusk missions are certainly a nice touch. Particle and smoke effects add that certain grit that's all-too-often overlooked in war titles; artillery cannons belch out smoke, tanks and trucks raise clouds of dust, blood and dirt fly freely during intense firefights. The result is a gripping experience that renders one breathless at times.

One trait that distinguishes an outstanding title from a merely average one is a multiplayer mode that's as good if not better than the single player campaign. Brothers in Arms meets this requirement and then some. Departing from the traditional FPS formula, the folks at Gearbox serve up a refreshingly mature interpretation of multiplayer that involves more than hacking off limbs and prancing around with a big blue flag. A whole slew of interesting team-based missions are available for play over LAN or the Internet. The same great squad command interface from single player mode is featured in multiplayer, making the variety of ambushes and manoeuvres one can coordinate with live team-mates practically endless.

Overall, Brothers in Arms: Road to Hill 30 is a solid title that isn't afraid to be all grown up. The plot and setting (although not necessarily the characters) are of Hollywood worthiness and the gameplay is stunning in both single and multiplayer modes. Visuals are vibrant and crisp but at the same time faithful to that "lived in" look. Authentic sound effects, understated music, and well-delivered monologue during chapter interludes also contribute to the drama. In short, this game represents a WWII tactical shooter done right; it conveys the often grisly realities of war but at the same time provides an exciting and rewarding gaming experience. And with the seemingly endless supply of war-themed shooters flooding the market today, other developers would be wise to take their cues from this top-flight title.