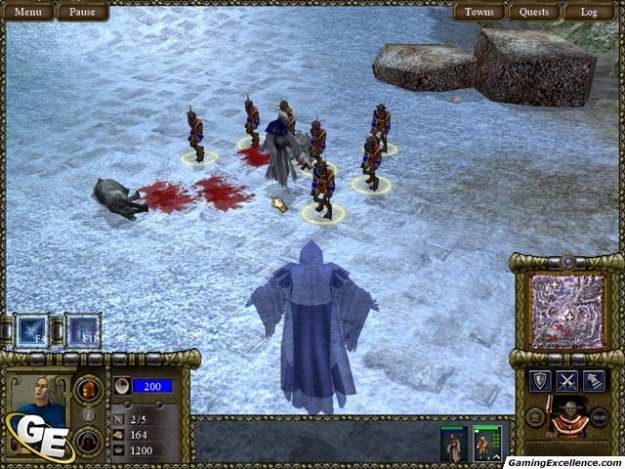 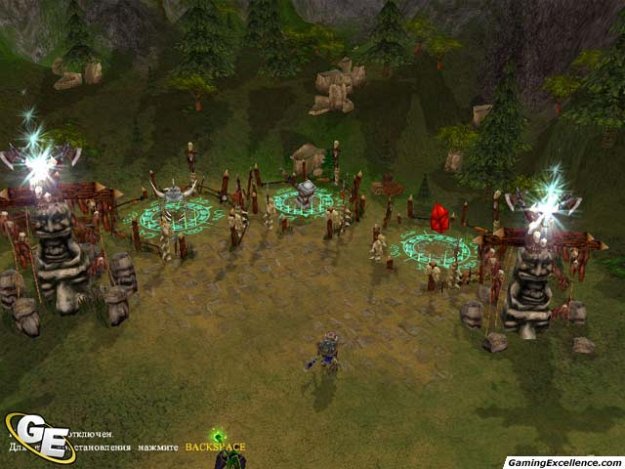 We recently had an opportunity to try out a build of Buka's upcoming sequel to Battle Mages, originally released in 2004. Battle Mages: Signs of Darkness maintains a very similar feel to the game as of that of its predecessor and stays with the traditional game play style. For those who never played the original game, Battles Mages provides the player with a unique viewpoint that seperates itself from most classical strategy and RPG games. The game itself is played in the third person perspective of your character, a mage. Your character never directly engages in combat, but instead projects an image of himself in order to move around the map and attack with magical spells.

In typical RPGs we are used to taking control of one or several individuals as a party, but Battle Mages introduced a different sort of approach that allows the players to take control of a large amount of units. Both your mage and the units under your control display RPG elements, such as gaining experience. As your mage gains experience, you are able to support a larger army as well as upgrade your skills and spells sets. Your units gain experience, which affects their stats, but they also can be equipped with different items in order to boost those stats yet again. This allows for some very powerful combinations. Units are purchased at towns, each of which has it's unique units available to be purchased.

The towns are where the player will receive most of their quests, primary and secondary, while the latter will be the one to continue the story. It is here that you can also buy and sell items, as well as hire units of soldiers and replace units lost in combat. Units are bought most often in groups and gain experience and levels through combat.

The interface for the game is almost completely the same to that of its predecessor, so those who have played the first game should be able to just sit down and be able to play the game without consulting a manual or having to memorize shortcut keys. For those who have never played Battle Mages, the interface is simple enough to use. A map is available in the bottom right part of the screen and displays not only your current position, but the location of all of your current objectives. This is useful for finding your way around a map and not getting yourself lost while trying to find a particular location. The only hindrance to the mapping system is when there is more than one quest available in a town and the player activates all of them. The map will display the locations of the objectives on the map by the traditional 'X marks the spot', but does not reveal any information about why it's there.

Battle Mages is currently in development by Buka, a Russian gaming company, and hence features voiceovers in Russian with English subtitles. This will most probably be changed for a North American release with English voiceovers. In the current version the foreign language did add a certain mysticism to the game which made it slightly more enjoyable to listen to. For those who have played games such as Starcraft, units in Battle Mages have only a small selection of audio tracks. This tended to get slightly annoying, as clicking your way to the other side of the map involved more than one click. The musical score is nicely done and fits well with the gameplay. The score will change to when you enter combat, which currently has only one music track. The transition is done fairly smoothly, though the only problem is that there is a tendency to enter and exit battle rather frequently, hopefully something that is addressed before the final release. This creates multiple transitions from battle to battle and was somewhat distracting.

One of the nice things that have been maintained from the original game is the ability to control your units only through the current view of the map. This is done by how you control your mage's projection. One way of putting it is that you can't control what you can't see. This brings a nice touch to the game and makes you feel more like you are actually in the game as an acting General. Fortunately, by double clicking on a unit card at the bottom of the interface you can warp to that current unit instead of traveling all the way there manually by using the keyboard. This makes it both fun and challenging to command two groups of units at the same time. You can be focusing on moving two groups, from two different locations at the same time and be caught completely off guard if the other group is ambushed while your attention is elsewhere.

Visually, the game is nicely designed and gives the option of zooming in as close, or as far, as reasonably possible. This is maintained from the original game, as well as the ability to rotate the camera freely around the environment. This allows the player to perceive different tactical situation from multiple perspectives. The interface that allows is provided for the RPG elements of the game, as well as when the player is in town, are very easy to use and navigate.

Overall, Battle Mages: Signs of Darkness is shaping up to be a well rounded sequel to its predecessor and should be well worth investing time into playing the game.