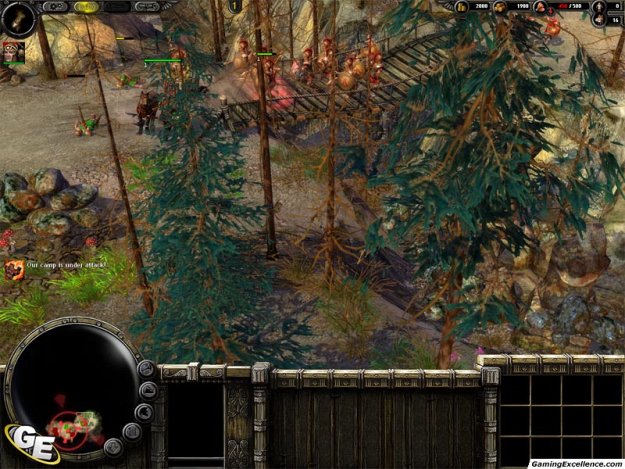 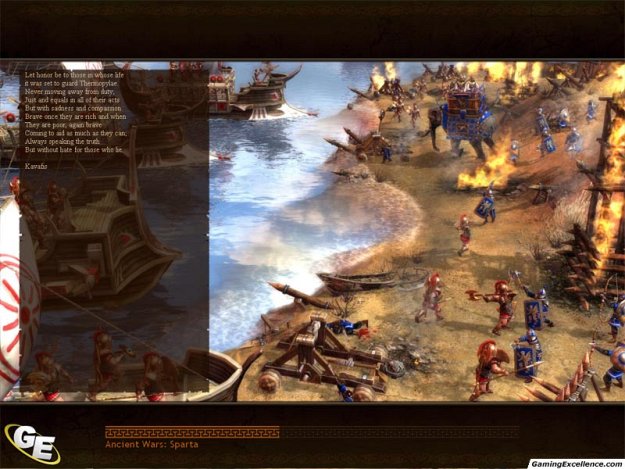 Ancient Wars: Sparta has been on the shelves of your favourite games retailer for quite some time, but considering its still hefty price tag, we're putting out this review if only to inform potential buyers about what to expect. Playlogic released this real-time simulation back in April 2007, rather conveniently a month after the opening of the blockbuster movie 300. Developed by World Forge, the game's first campaign follows the story of Leonidas in the impossible fight of 300 men against the entire Persian army. Unlike the movie however, it doesn't offer cheap thrills, artistic camera positions and a dark atmosphere. Nevertheless, visuals are not part of the game's weak points.

Ancient Wars: Sparta features some rather solid graphics. The structures are proportional to the units, and that's always nice to see because it adds to the realism of the graphics. Both the structures and units are very nicely animated, notably the evolution of a building as it's constructed and the ability to see units training in a building's courtyard before they become available. The game has nicely detailed textures, including on rendered water, which are compounded by a variety of objects to form a rather splendid setting. Volumetric fog adds to the atmosphere and realism, though the renderer sometimes reveals objects otherwise hidden in the shroud of war. Other than a few other occasional glitches usually involving object shading, the graphics are top notch.

The physics model complements the visuals to create a very realistic experience. For instance, a unit's line of sight is blocked by terrain, both land elevation and objects of the decor. Another impressive feature seldom seen in RTS games is the presence of realistic fluid dynamics, which causes ships (especially larger ones) to be affected by their momentum. This means that a rapid change in course will cause the ship to slightly drift in its original direction, and making complete stops takes a little longer (unless of course you've rammed another ship, were momentum transfer occurs). However, the physics engine fails somewhat in the gameplay category, as the units' pathfinding abilities have difficulty in many situations, often resulting in confused units standing in impassable corners. Unfortunately, the gameplay's shortcomings don't end there.

In fact, this game is a dreadful mix of boredom and frustration, primarily because the economic model is incredibly unbalanced. While there are three resources needed to sustain a colony, wood is in such abundance and is so little used that tasking three villagers to harvest lumber will most often stockpile enough wood for three colonies. The food resource is almost equally unimportant, as managing three farms should suffice for a medium-sized army. That leaves only gold, the third resource type, which is in very short supply and heavily required to do even the lowest-level upgrade. This means that most of the time playing this game is spent watching your villagers run in and out of the gold mine. When you can finally afford to buy some units, you'll quickly notice that they die way too quickly, leaving unsatisfying splotches of blood on the well-textured landscape.

Unit management is unremarkable, since it reuses the same formula as every other RTS game. Building construction, however, has a few irritating issues. First, a construction order can't be assigned to a location that is not currently within sight of your units, even if that location has been previously explored. Since a building's width is usually about the same size as a unit's line of sight, your villager pretty much has to be at the desired location before the order can be given. Second, walls are impossible to manage since, once destroyed, they leave a pile of rubble on the map and new walls can't attach to existing ones. So if an enemy breaks down a section of your wall, it's usually necessary to tear it all down and build a new one, and by the time you get that done, the enemy's usually attacking it again. Finally, buildings only have one door out of which newly trained units can exit, so building placement is critical to avoid blocking them.

Ancient Wars' story is split into three campaigns, one for each of the game's races. If the in-game graphics are spectacular, the menu system is the complete opposite and severely lacking in polish. The mission selection screen is less than intuitive - it automatically selects the first mission of the campaign rather than the next uncompleted one - and it looks worse than the dated basic layouts of RTS pioneers like Warcraft. The mission loading screen is equally unimpressive, overlaying a plain font text box of the mission background on top of a static image. To make matters worse, the mission scripting is mundane and unimaginative, reusing the typical "bring unit X to location Y" or "kill unit Z before it escapes" formulas repetitively. Combined with absolutely cheesy dialogue and a far-from-seamless text-to-animation synchronization, the single player experience is to be avoided. If you're wondering whether the multiplayer/skirmish modes are any better, the variety between the races, besides the different visuals, is hardly noticeable and dramatically impairs the replay value of the title.

World Forge does deserve some kudos for trying new ideas, such as their unit designer and equipment system. Players can create their own unit types by associating different equipment to body types and giving custom names to their creations. The equipment available depends on the technologies that have been researched and the unit's cost depends on its equipment. While this gives players a bit of additional range in unit costs, it quickly becomes tedious to recreate unit types every round. In addition, there doesn't appear to be a noticeable difference between the barracks and the archery range buildings, since they have access to the same units and equipment… so why build both? Another feature is the ability to mount units onto horses. Games typically have a separate category for mounted units but, in Ancient Wars: Sparta, horses are trained and then mounted by existing units. Players can also claim their enemies' horses once they've killed the units atop them. Units can also climb aboard ships, not only for transportation purposes but also to act as the ship's main weapons. While melee units can't contribute, any ranged units on board will fire at other ships as before, which is a nice change from the usual giant arrows appearing out of nowhere. Granted, the naval units aren't entirely impotent since the game's "ramming" physics allow ships with a certain amount of momentum to damage other ships they hit head-on, but these attacks require a little too much micro-management to make them effective.

Ancient Wars: Sparta features some pretty nice graphics and some rather innovative gameplay elements but falls short on the most crucial aspect, the fun factor. The engine is solid and the shortcomings of the game are mostly limited to scripting and configuration so it should have been a rather straightforward fix for the developers to implement. However, it hasn't been patched yet, six months after its release, so it's unlikely it ever will be. Sadly, this game is thus doomed to end up in the bargain bin.