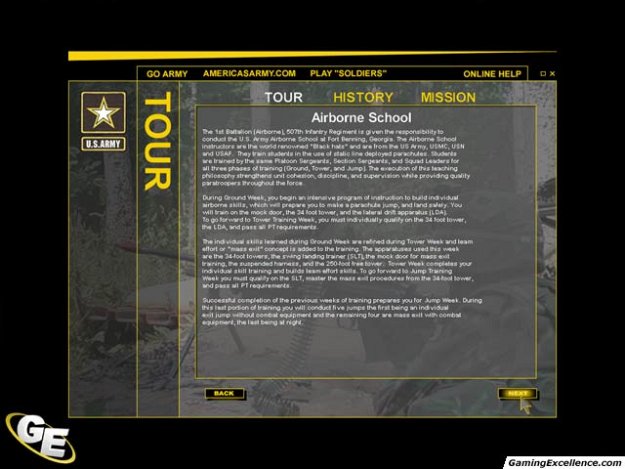 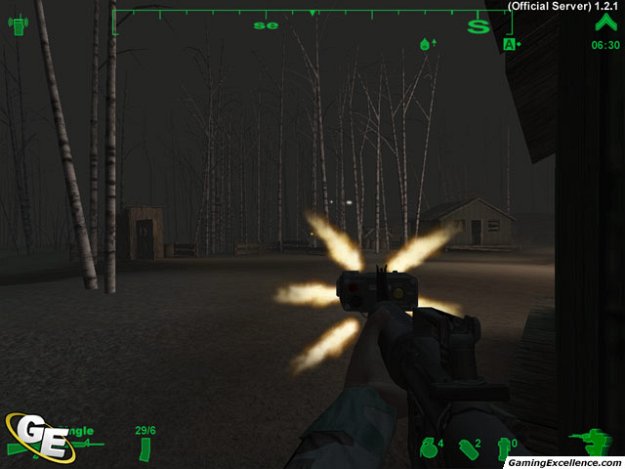 First person shooters are some of the most popular titles on the market today; online shooters are even more common. Some of the most played games are those developed several years ago, Soldier of Fortune II, not to forget the massive modification to Half-Life, Counterstrike. These titles are popular for a number of reasons, they are quick paced and entertaining to play. Now, the United States Army have developed a realistic representation of this type of title, and have successfully combined the elements that make online shooters a success.

It goes without saying that the United States Army knows the realism behind first person shooters best, and we were all quite surprised when they announced the development of two games last year. Now, here comes the best part, these games are absolutely free. Now, I am well aware that no game is perfect, even those that don't cost a dime. Something can always be improved, although free games are always an added bonus.

Based of the next generation Unreal engine, America's Army is without a doubt one of the most realistic first person shooters ever produced. Combining both strategy and stealth based gameplay; players are expected to work as a team to complete a combined objective. Unlike other online titles such as Half-Life: Counterstrike, this teamwork is a critical element and without it the mission will likely fail. One little tidbit that many players may not immediately understand is that while competing, you will always wear the uniforms of the United States Army, while opposing forces will wear terrorist uniforms. Although you may in actuality be firing a gun used by the US troops, the opposing forces will see you as firing terrorist weaponry such as AK-47's. This concept is relatively understandable; remember we are speaking about the United States Army.

America's Army is primarily a multiplayer based title, players are expected to work their way through experience points in an RPG style system. Qualification is required to advance through each stage in development; offline weapons and skills qualification must be completed before players can advance to the multiplayer venues. Further qualification is available as player's progress over time, the newly introduced Sniper School and Airborne Training are two new additions to this ever-expanding title. As players become more experienced, further benefits are available such as new weaponry and specialization in combat, valuable techniques that can be used on the battlefield. The multiplayer matchmaking system is completely integrated into the title, allowing players to find available games relatively quickly. Although in its current state the HomeLAN servers are the only ones players may use for qualification, other servers may be setup once this step is complete.

As previously mentioned, America's Army includes a relatively large arsenal of weaponry for use, although players must qualify to select each weapon and teams are limited to the number of these special weapons per game. M16A2, M249 automatic rifle, and the ever-powerful Barrett M82A1 are just a few of the realistically designed weaponry present in America's Army. Among these firearms is the standard detail for each soldier, M67 fragmentation grenades, flash bang grenades, and Kevlar helmets among others are of common use on the battlefield. The amount of detail and realism that has gone into each weapon is remarkable, everything from realistic handling to the proper recoil and metal sights opposed to the unrealistic crosshairs seen in most titles.

Graphically, America's Army shines quite nicely. Player models are beautifully detailed, although a wider variety of facial difference would be an added bonus. Level design is directed towards a realistic touch, smoke from grenades is second to none. Even the minor graphical features are a nice addition, moths flying around the lights at night and the dirt flying into the sky as bullets penetrate the ground. Muzzle effects are beautifully generated, and the lighting for each level is also quite nice. America's Army is a good indication of what the next generation Unreal engine is capable of, that is an understatement to say the least.

Gameplay is a critical element in this type of online title, and while America's Army may feature the most realistic elements seen in a title it may not be for everyone. Movement is quite a bit slower, and the game pace is lax compared to similar titles such as the aging Half-Life engine. The number of complex movements in America's Army is a nice touch, the ability to roll while on the ground or lean around corners before venturing out into the open are a couple of these realistic elements. Unfortunately, this is not all positive, as grenades are especially lethal. Even friendly grenades are hard to avoid, and they are so commonly used that you may find yourself often find yourself sitting out due to a friendly grenade. Players are simply not able to move fast enough to get out of the way of an incoming grenade, although this may be somewhat realistic it does not properly portray the human intuition to dive behind an object and get cover when they sense a grenade has been thrown. Although the simulation guru may enjoy the title to it's fullest extend, casual players may find themselves frustrated at its difficulty level and relatively slow paced gameplay.

Sound effects are one of the nicer aspects of America's Army, from the metal clang as shell casings hit the ground to the outstanding voice acting. From your initial visit to the training grounds at Fort Benning, Georgia, players will become accustomed to the Army way of speaking, orders are given Army style with very direct meaning and often straight out yelling. Everything from the crickets chirping as you slowly move towards an enemy controlled camp to the sounds as you fire rounds of ammunition towards the enemy position or lay down cover fire for an allied soldier are superb, extremely realistic and lifelike.

From all of the nice features presented in America's Army, little is derived from new ideas, nearly everything has been seen elsewhere. Each map is nicely designed with a variety of unique objectives, yet players may find themselves becoming tired of the same style gameplay made famous by Half-Life: Counterstrike. Although the download may be large, the game doesn't cost anything and as such players should judge for themselves whether this is a worthy candidate to remain on their hard drives. The United States Army have accomplished exactly what they wanted to do in America's Army, introduce players to the world of Army life and let them judge for themselves in an entertaining and risk free setting.