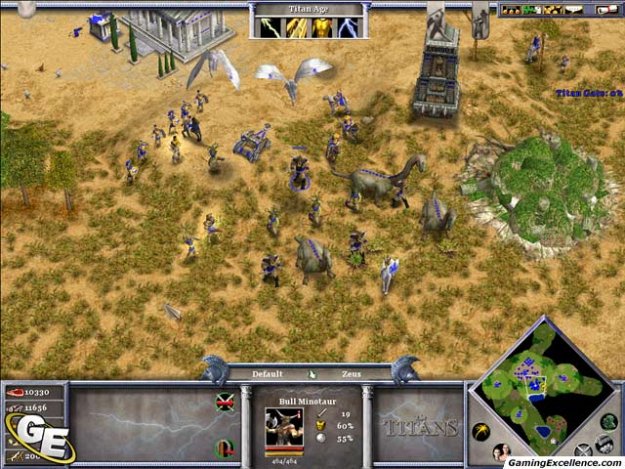 The famed developer of the Age of Empire series, Ensemble Studios and Microsoft Game Studios desire to amaze us with their newest game, Age of Mythology: Gold Edition. A bundle containing both the original and the Titans expansion pack, it's what you get when you combine every imaginable mythological unit into an action-packed real-time strategy game.. Age of Mythology, like the name, is based on the mythological characters of ancient history. Watch and play as a story of good versus evil unfolds before your eyes. Age of Mythology takes real-time strategy to an all-new playing field, and may just bring a whole new level of entertainment to the genre.

Age of Mythology offers a wide variety of different game styles and options, enough to keep players busy for hours on end. Whether you enjoy playing adventurous campaigns, quick matches, or challenge a friend over the internet or local area network, players can expect many hours of play out of the title. The campaign mode consists of over thirty scenarios, in which you play a character named Arkantos. As the game progresses, Arkantos will meet four different cultures, Egyptians, Greeks, Norse and finally the Atlanteans. As the journey progresses, expect to encounter very unique buildings, landmarks, and mythological characters such as the Trojan Horse and the Medusa. For beginners, the game also contains a simple learning mode introducing players to the basics of the game.

When players begin a quick match, they can choose from amongst twelve major civilizations. Each civilization is then broken down into three distinctive paths and Gods. Each God and civilization are offered different godly powers. Some of these powers include the ability to cast lightning, create plagues, launch meteors and begin rain showers that can affect different characters. In fact, there are thirty-five powers featured in the game, a lot of variation and tactics to learn.

Age of Mythology features four different styles of gameplay; supreme, conquest, death match, and lighting. In the "supreme" mode, the only requirement is that players either complete a conquest by defeating all enemies, building a fortified town center in every settlement on the map, or complete a wonder victory. A few minor issues arose here that I noticed. For example, to gain a wonder victory, all that needs to be done for your enemy to win is to build a single wonder. The gameplay is too slow for units to get past your opponents in the small amount of time provided to take out that single wonder, a slight frustration at times. Combined with the different styles of gameplay, Age of Mythology: Gold Edition also features twenty-nine different maps, as well as a map-editing utility. The wide variety of maps, and different gameplay styles are more than adequate, and leave a lasting impression.

Ensemble Studios, up until now, haven't really created hardware intensive PC games. This is certainly not the case for Age of Mythology. Although the graphics engine is nearly two-years old, it still sets high standards for video requirements to this day. The units and buildings are highly detailed, and overall the intensive graphics engine is superb, still a very strong contender.

Game play in age of mythology is by far one of its strongest element. Units and buildings are extremely well-balanced, and fortification isn't as simple as other real-time strategy games as towers can be destroyed fairly easily. The game requires players to gather four resources to build and summon your armies, food, lumber, gold, and favor. Favor is a unique resource introduced in Age of Mythology, it's obtained in many different ways depending on the civilization selected. For example, the Greeks get favor by assigning villagers to pray at the temple, while the Norse get favor points by engaging in battle. This concept adds a whole new dimension to the real-time strategy genre, and adds a touch of perfection to Age of Mythology.

Once a small town is established, players can begin to advance through the ages. These ages consist of the Classical Age, Heroic Age, and finally the Mythic Age. Each age offers new heroes, and brings new mythical creatures to life. Also, like every other real time strategy game, it allows players to complete further research to improve units, structures, and gathering rates. When players reach the Mythic Age, the ability to construct a Titan Gate is unlocked, allowing players to unleash their God into the world. The Gods have a really impressive size, and superb fighting power, quite a challenge for your enemies to defeat. This ability really gets interesting, especially when you are fighting a monster ten-times the size of your largest unit. Gods aren't quite invincible, they can be killed; it just takes time, patience, and a little bit of strategy.

Simply put, Age of Mythology: Gold Edition is a great game to play, and I am happy to have it as part of my collection. Offering both the original and The Titans expansion pack, the replay value is exceptional, one of the few titles that I've really been able to thoroughly enjoy. Age of Mythology isn't any ordinary regular real time strategy title, it offers a whole new concept of units and advancement, with a huge campaign mode and multiplayer for up to eight players over the internet or local area network. In short, Age of Mythology: Gold Edition is one of the best real time strategy games on the market today, and that is just the beginning.