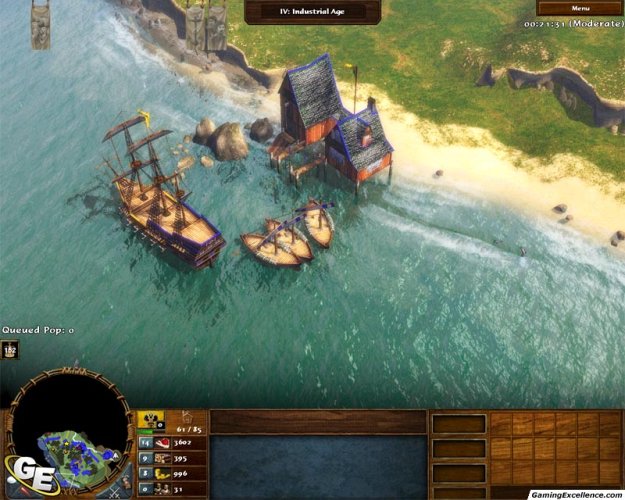 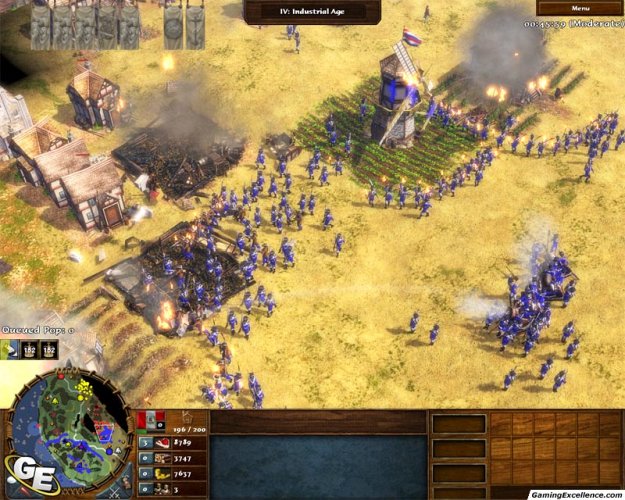 The question of purchasing expansions is a difficult one for most gamers. Since most expansions usually fall short of expectations, one can usually find them in the bargain bin half a year after their release. For real-time strategy games like Microsoft's Age of Empires series, the expansion formula usually involves slightly incrementing the game's time span by adding a single-player campaign or two, and increasing the replay value with a new civilization or new map types. The very successful series, which includes titles such as Age of Empires II: The Age of Kings and Age of Mythology, has closely followed this formula and has seen limited success from their expansions. Since Microsoft showed no signs of deviating from the usual with their latest release, I met The WarChiefs , with a hint of apprehension.

Following the series' lead, it came as no surprise that The WarChiefs boasted excellent visuals from the start. The opening cinematic, though very short, is beautifully rendered and opens onto a redesigned interface. As before, the background is a fully dynamic representation of the player's home city. The expansion adds a new single-player campaign of 15 missions in two acts. You'll recall that the original campaign has you playing as three generations of the Black family, Morgan, John and Amelia, whose storyline focused on a mysterious group called "The Circle of Ossus" and the myth of the water of life. Thankfully, that idea was not pursued in the expansion. In the first act, you control Nathaniel Black (John's son and Amelia's father), who was raised by Native Americans and is unwillingly pulled into the Revolutionary War to protect his tribe. In a significant digression from recorded history, the writers have invited the Germans to fight alongside the British and Nathaniel is quick to form a rivalry with their particularly annoying leader, Colonel Kuechler. The second act sees Amelia's son Chayton expand the family railroad westward and encounter Sioux tribes resistant to their territorial invasion. Chayton gets bullied around by his fat friend Billy Holme until his Native American heritage catches up to him and he leads the Sioux to victory. Though not particularly captivating, the campaign does feature an innovative twist on traditional objectives and varied gameplay. The high quality of the mission crafting should be attributed to the map designers, who have produced rich maps that work well with the objectives while still providing artistic beauty. In one particular battle, the epic battle of Washington vs. Cornwallis at Yorktown, the landscape is wonderfully similar to the last scene of The Patriot (Mel Gibson).

Not to disappoint the fans of variety, The WarChiefs adds three new civilizations, giving the Native Americans a real role in the battle. The Sioux, the Iroquois and the Aztecs all played vital roles in the colonization of America by Europeans, so it's only fair that they may partake in the bloodshed as more than mercenaries for European players. As opposed to expansions of previous games, the three come complete with their own architectural styles, enriching the artistic quality of the game. In addition, the three cultures each have an infantry and cavalry unique to their race, which promises to add much needed variety to the battlefield crowded with musketeers. A novel element common to all three is the fire pit "building" which essentially acts as a fourth resource. Players of Native American races can task villagers to dance around the fire in order to provide their civilization with bonuses ranging from a population boost to attack bonuses, with increases in effectiveness as more villagers are assigned to dance. It sounds like an odd idea but you'll soon appreciate its effects.

Though these additions are interesting, the standard expansion recipe still applies up to now. I was pleased to discover that the developers gave The WarChiefs an extra push. The list of home city cards available to your civilization seems like an obvious spot for some extras and it hasn't been overlooked. In fact, the new list of cards is the single element most likely to add a significant amount of depth to the game. They provide tide-turning abilities such as rebuilding forts with musketeers, wide-scale capitol-style upgrades in the Discovery age (e.g. villagers gather food 10% from all sources), and rapid reconnaissance using permanent hot-air balloons. To ease the integration of these cards into decks, the limit has been increased to 25 cards per deck, which also reduces the probability of unusable shipment allotments during longer matches.

Gameplay is further varied by the addition of a few other features. Players can now buy a trade monopoly if they control more than half of the trade posts on the map, which (for a modest fee) initiates a five-minute victory countdown. Multiplayer games can also be started with a treaty which prohibits outright combat for 10, 20, 30 or 40 minutes for those who dislike "rushing" matches and prefer longer games. Equally conscious of players with a preference for shorter games, the expansion provides a "Revolution" mode as an alternative to the Imperial age, which transforms your civilization into a powerful war-driven race. By revolting, other players are locked into "imperialism" to avoid complete carnage. This option converts your villagers to militia, transforms your colony into a military powerhouse and changes your home city as well. However, revolutionists will be unable spawn more villagers thereby grinding their economy to a screeching halt. The revolution option is a drastic one bound to resolve stalemates quickly.

The expansion also adds six new map types representing various regions of western America. From the lime green grasses and terra cotta hills of the Andes to the reddish cliffs of the painted deserts of Arizona, the game's artists have truly outdone themselves. Each map has new elements specifically crafted to represent the region and each presents a different tactical advantage. However, it's the fine touches of artwork that make them amazingly enjoyable to play. Battles will rage amongst the boreal forests in the Northwest Territories under a calm gentle rain unless the frosty winter changes it to a ravenous blizzard. By far the nicest and most diverse type is the California map which features beautiful sandy beaches, mountainous cliffs coiffed with tall redwood trees and blends westward with the beginnings of the Mojave Desert. The cliffs also provide tactical advantages and defensive possibilities which molds the aesthetic with the functional.

Other noticeable improvements to the game are that Explorers are marked as stars on the mini-map for quick identification; War Chiefs provide bonuses to nearby troops; European colonies can train/buy mercenaries and natives from the new Saloon and Native Embassy buildings; and finally five new minor tribes are present on the new maps

With its many gameplay changes and additions, The WarChiefs has all the right cards to finally break the dreadful curse that has plagued the series' previous expansions. At the very least, it's sure to provide much enjoyment to the artistically inclined.