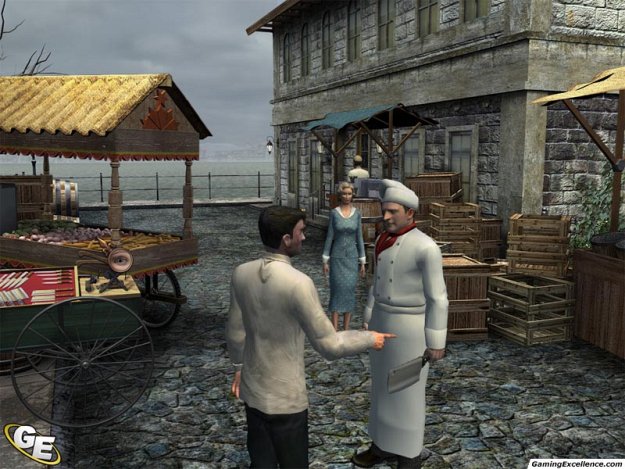 With the 2005 release of "And Then There Were None", based on the Agatha Christie novel of the same name, it seemed only a matter of time before one of her more famous pieces, Murder on the Orient Express, was turned into an interactive experience. While the game matches to the story for the most part, the developers took a few liberties in certain plot points and characters, including adding a couple endings to the twist.

In this mystery you will not be playing the part of famed detective Hercule Poirot (well-voiced by the skilled actor David Suchet, who plays him in the television series), but instead that of Antoinette Marceau, an employee of the train company that is carrying the fateful passengers to their destination. Quickly after the opening scenes of the game, Poirot injures himself when the train hits a hard stop, and is blocked by an avalanche,. He is instead relegated to the sidelines as one who tells you what to do next, and helps you along if you need a bit of advice. From time to time you'll hear his voice echo through Antoinette's head, chiding you for making a silly choice or applauding you for completing a task. It's a little irritating at first, but you'll quickly get used to it.

One of the better aspects of the game is the detail in which the areas, especially that of the Express itself, are rendered. It's a good thing, too, because you'll be seeing a lot of the train. Except for a few areas in the game where you're walking around outside, the game takes place on the Orient Express. Things can quickly can repetitive as you walk back and forth through the train cars, back and forth, again and again. Though some cinematic camera angles and thoughtful presentation of the scenes lighten the monotony somewhat, there's still a problem with seeing the same scene over and over again.

Unfortunately, Murder on the Orient Express is riddled with flaws that should have been addressed at some point during its development. As I spoke to people around the train, I realized that dialogue lacked any real choice or thought. Despite usually having a variety of choices to a given question, it doesn't matter what choice you pick, nor will the dialogue end until you've selected every option. So, while I might correctly guess choice A as the right answer, I still have to say choice B and choice C, which makes me feel like a complete idiot. Most of the dialogue (between other characters, anyway), otherwise, has been lifted from the book and the movie, and feels rather authentic and well-done, aided by the good voice acting of the cast.

My other big gripe with the game is that of the interface. Throughout the game you'll get a variety of items, but sorting through them is painful. What's even worse is the way you combine them. Despite many games taking the standard method of 'using' an item on another, Murder on the Orient Express instead using a special section in your interface to combine items. This interface involves opening your inventory, selecting your item, opening the combination screen, placing your item, opening your inventory, selecting another item, and so forth. Essentially, it's poorly done. It's a system that becomes tedious very quickly, especially when you have to do it multiple times on some common actions, for example to fingerprint something.

Much of the gameplay can also get tiresome. You'll often find yourself running from one end of the train to the other trying to complete one mindless task or another. One of the first tasks you're given by Poirot is collecting a variety of items to combine to read some paper. This means rummaging through everyone's personal belongings, searching in every hatbox you can find, and basically doing the same thing multiple times in everybody's room. Later you'll be trying to find everybody's shoes.

It's difficult to imagine how any fan of the adventure genre, or the books in general, could really enjoy Murder on the Orient Express. Either the people who read the novel or watched the movie will be irked by the liberties taken with the plot, or the people who don't know the story will be bored by the running back and forth and lack of change. Despite doing fairly well in following the mysterious atmosphere of the story, the game is broken up too often by periods of repetition and mindless scouring of the train for particular things. An unwieldy interface just adds to this problem. The game's not terrible, but a poor example of what a novel adaptation could be, and so might only be enjoyed by those who really like the tales of Poirot, and a good mystery. It's a good thing the original novel comes packaged with the game, because in this case, I'd recommend giving it a read instead.