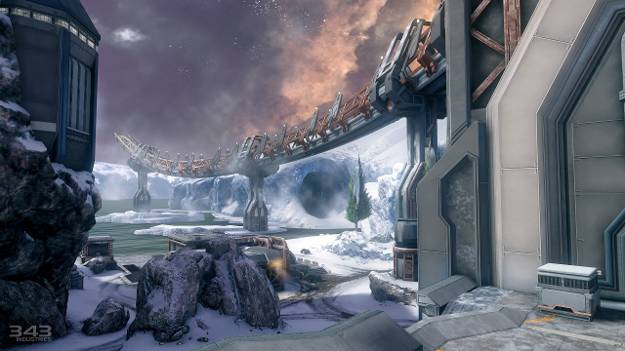 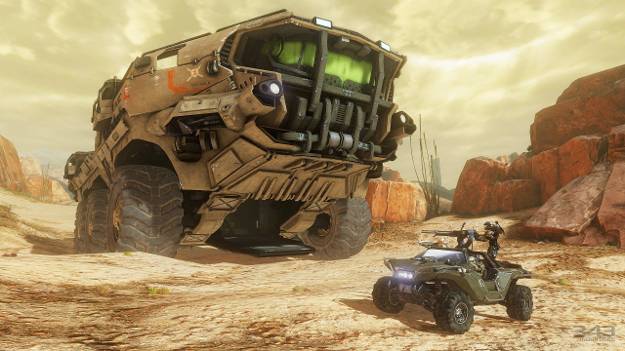 If you're a nerd like us, you've seen Daniel Cudmore at work, from his roles as Colossus in the X-Men films, to his roles on the StarGate TV series. One look at him, and it's clear that there's few actors out there who seem to fit the distinct role of Halo's Master Chief more comfortably than the 6"6', soft spoken actor who hails from Squamish, British Columbia. He's also been in the Twilight films, but we won't hold that one against him.

Cudmore can be seen in the current webseries Halo 4: Forward unto Dawn, available on Machinima Prime and Halo Waypoint. The series is a five episode production that leads directly to the plot line of Halo 4, which is on the verge of its highly anticipated release in early November.

Fortunately, Cudmore didn't have any Covenant aliens to shoot at the Halo 4 launch party in downtown Toronto, so he was able to sit down with us and chat about his experiences in the iconic Master Chief armor!

What can you tell us about Forward unto Dawn?

It's a really cool new venture that we're using to promote Halo 4. It's a full standalone movie that plays right into the video game. It's a five episode series once a week on Machinima Prime and Halo Waypoint that plays right up to the release of the game.

Is it live action or animated?

It's a live action webseries. It's very cool, with a great story and fantastic production value.

How long is each episode?

About 15 minutes each, give or take.

What was your role?

I play the guy in the suit. (Another actor delivers the dialogue)

So you're in the David Prowse role?

(laughs) Pretty much. It's such a weird place, because I have to act out all the scenes and do all the dialogue. At the same time, I'm doing all the movements, and the movements have to be over the top. Your performance has to be very true to what the scenes are. It was a weird experience.

Where was it produced?

The whole thing was filmed in Vancouver, BC, right in my backyard.

I think a lot of the locations were perfect for the filming. That, and being so close to Washington where (Halo developer) 343 is. It made an easy commute for those guys, who had to be on set pretty often.

I'm sure having the Rockies right there doesn't hurt for the kind of environments that gamers expect out of Halo.[/B\

That's right. Vancouver has got a very diversified landscape. It lends itself really well to doing as many different themes, ideas and places as possible.

How long was the production process?

The shooting was only five weeks. It was really fast. As soon as we wrapped up principal photography, the guys went right into the editing studio and went crazy. I don't think any of them slept.

When did shooting take place?

It was in April/May.

So it's been gestating for a little while.

Compared to a lot of features, the amount of time they have is huge compared to this project. This was very, very fast. The product that came out with that amount time is amazing.

What was a typical day on the set like for you?

It was just get there early, get some food in me as quick as possible, and then get right into the suit. The suit preparation to get it on took about half an hour to forty-five minutes. After that, I was running around all day, trying to look as badass as possible, shooting as many aliens as I could. (laughs)

Did you have some gun training?

I have, but that's also because of a lot of action movies and roles I've done.

I've done all the X-men movies, and I played in Stargate Atlantis, Stargate SG-1, things like that. So I've shot a lot of guns. I did go in and took some training just to get more familiar, especially on a military basis, so I could handle the weapon a lot better. I took a lot of lessons in Los Angeles at a gun range. I got to fire an M4 carbine.

Yeah, that was pretty cool.

What were some of the challenges during shooting? What did you have the most fun with?

The biggest challenge for me was just getting the movements right with the restricted motion I had. Some of the vision issues were tough with heat and fogging up the lens. It was all in good fun, and that's all a part of making movies. It all lends itself to the process. The fun comes out of that hard work and then seeing how cool it is on screen. It's about producing some great stuff.

Do you play the series?

I haven't played the games since Halo 2. My wife, who was my girlfriend at the time, bought it for me. That was the first game I had for my Xbox, and I played it front to back. Now, I'm no longer with an Xbox, so I've got to get a new one and get back into it.

What's the release schedule for the episodes?

The first episode released on October 5th, and then one a week until November 6th when the big game comes out.

What production company was involved?

It's all in house! It's all Microsoft and 343. I think it's the biggest live action venture that they've done thus far. I mean, from what I'm watching, and I'm biased, it's really amazing what they've done with it. Keeping it in house keeps it close to what the fans expect.

Do you think if this series really takes off, might we hear about a Halo movie again? I'm sure you're familiar with the whole Peter Jackson debacle a few years back.

I'm not too sure. At the end of the day, that's up to the bosses at Microsoft and if they want to go down that road and whether that's a priority. I know the priority now is for Halo 4 to come out. But hey, from the fictional books that I've read, the amount of material they have and different directions they could go are huge. I'm biased in that fact, so if it was up to me, I'd say go do it! It would be amazing, but who knows? I think it would great if they did.

Would you be willing to reprise your role if they did go that route?

If it was something and it looked attractive, it's great to play this character. Don't get me wrong, it all depends where I am at the time, and who's attached to it. You never know, a director could have a totally different vision. I'd definitely be flattered if they asked me again, and hopefully I'd be free to do it.

What's next for you personally and professionally?

Personally, I just got married, so that takes up all my time! (laughs) Work wise, I have another movie coming out in the New Year, as well as the final instalment of Twilight coming out on November 16th. After that it's Christmas time, so most productions shut down. In the New Year, it's time to get back to the grind and get more work. It's all about grinding and getting more roles!

Awesome! Thanks a lot for taking the time to talk to us!