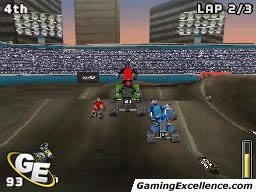 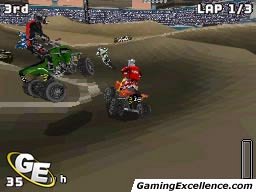 Rainbow Studios has made a killing on their ATV franchises. Getting its start on the PS2 as ATV Off-Road Fury, Rainbow has sold millions of copies of their yearly instalments. Now that THQ is holder of the licence, the franchise has free reign to appear on several other platforms, including the new DS iteration.

It is pretty admirable what the developers were shooting for with this DS iteration of the game, and for the most part, they succeeded. However, not unlike the dirt covered tracks in the game, they've hit a few bumps along the way.

When you first pop the game into your DS, you are given four options. X-cross tournament, stunt tournament, custom event, and multiplayer. The tournaments comprise the meat of the game, but there isn't enough meat here to even comprise a Big Mac. Each tournament is only three races, and there's a total of three cups per event type. Do some simple math and you can see that after winning eighteen races, you'll have played and unlocked pretty much everything the game has to offer. Each tournament win contributes fifteen percent to your completion rating.

The game adds a little depth by giving you the choice of running any tournament with just MX dirt bikes, just ATVs, or a mixture of the two. The controls on the DS version actually feel sturdier than on the home console versions, and staying upright is far easier on the handheld. Stunts have a good feel to them, and control well. However, the handheld version does away with the ability to link tricks, which limits your high score significantly.

When you begin a tournament, you have the choice of rider, and type of bike you're riding. As far as I can tell, these differences are purely cosmetic and do nothing to alter gameplay. But hey, a true motocross fan will always play as Chad Reed, I guess.

You're also given the choice between Amateur and Pro difficulty. These difficulties are at the complete opposite of the spectrum. It's kind of like choosing between low-IQ infant and beat-your-head-against-a-brick wall difficulties. On amateur, the racers will drive in slow motion and/or simply neglect to do any stunts, depending on your event choice. On the other hand, on Pro difficulty, the AI will nearly lap you halfway through the race, and chain together stunts like Tony Hawk on speed.

The actual gameplay itself is pretty solid though. The bikes all have a good feel to them, and the physics are very well done for a handheld. The track designs are very good, giving a good rhythm to the racing action. In order to get desired amounts of air, riders must pull back on the D-pad and then thrust upwards at the lip of the hill to get maximum air. The same mechanic is present in the home console version, and despite the lack of an analog stick on the DS, it feels just as solid here.

MvA is a very mixed bag in terms of graphics. The riders themselves look OK, and animate quite well. Aside from that however, the game is a hideous, pixelated mess. Giant pixels larger than your rider make up the tracks, the audience is indiscernible from the dirt, and textures are blurry to nonexistent. This looks worse than a PS1 game. Call me a gamer snob if you will, but handheld games nowadays should look better than ten year old console games. At least the frame rate stays pretty high, and it never gets so bad that you can't make out the track.

Audio is pretty decent for a DS game. The engines sound surprisingly throaty for such tinny speakers, as do the crowd noises after a nasty spill. The music is catchy yet generic hard rock guitar riffs that you won't complain about, but aren't particularly memorable.

While it is impressive how much of the gameplay nuances of the home versions have made it into this handheld cartridge, there simply isn't enough gameplay to keep you interested for very long. You can blow through everything the game has to offer in two hours, and the ability to create custom events doesn't add enough to a meagre package. A solid first effort, but discriminating gamers beware.