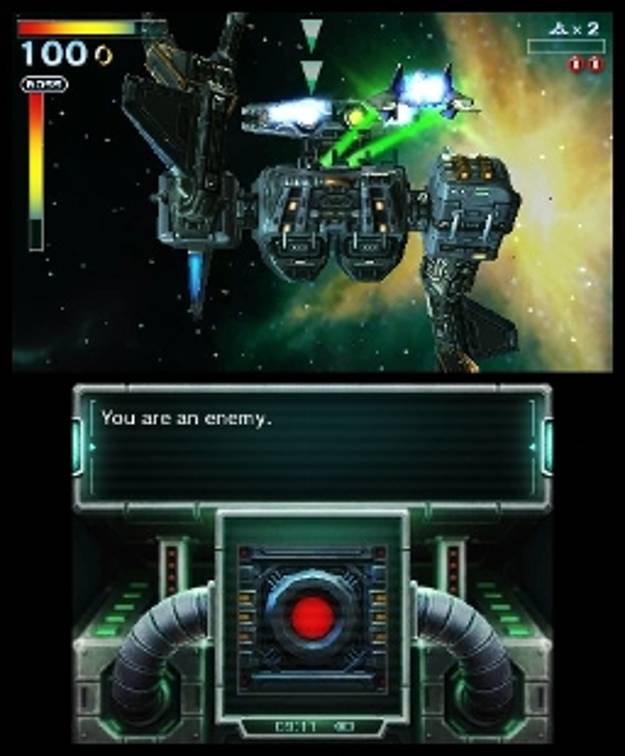 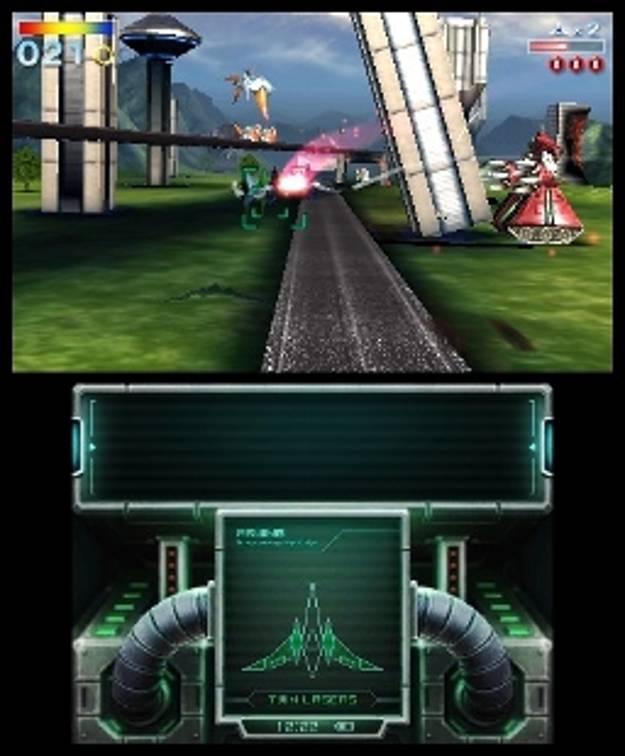 I don't know if it's a good thing that Star Fox 64 is coming to the 3DS. Almost by default, it's already the second or third best game available for the fledgling system. Along with Ocarina of Time, when two of the best games in your library are re-releases of nearly 15 year old N64 games, its time to take a good hard look at your game library and really wonder why people should invest in your system.

With that said, Star Fox 64 3D is a great re-release of a beloved N64 classic. The new additions are definitely solid enough to justify the investment, and it's great to be able to whip out a single level on the bus or elsewhere on the go.

In a roundabout way, Star Fox 64 is really a remake of 1993's Star Fox for the Super Nintendo. A malevolent villain known as Andross has pointed his armada towards the Lylat system, home of Star Fox and his crew. As Star Fox, it's up to you and your crew to jumping into your Arwing space fighters, fly battle to battle, from planet to planet, and blast anything that gets in between you and a final battle with Andross.

Gameplay wise, Star Fox is basically an more in-depth rail shooter. You ship almost always flies forward, while you have control over avoiding obstacles and speeding up and slowing down. Your ship is very manoeuvrable, allowing you to do barrel rolls, quick turns, somersaults, and sometimes U-turns. The controls are pitch perfect, making avoiding obstacles and blasting enemies a breeze. The 3DS version even introduces gyroscopic controls that allow you to steer your vehicle. The gyro controls work well, but feel more gimmicky that the standard thumb pad controls.

Level variety is surprisingly one of Star Fox's strengths. While the majority of levels have you piloting your arwing in a linear level, others will put you in a square area, flying repeatedly in the same area until you complete your objective of wiping out all the fighters or blowing up a base. The variety is welcome, and the all-range levels were actually my favourite.

The shooting action is also satisfying. Your lasers can be upgraded by collecting power-ups, and can be charged for a powerful, heat-seeking shot. You also have screen clearing bombs at your disposal which are invaluable against the well-designed bosses.

In another attempt to increase replay value, how you play through certain levels will determine your path through the game. If you don't blow up a base within a time limit, for example, will determine which path you'll end up taking. With fifteen levels in all, you'll have plenty of different paths to take.

Multiplayer is fun, but unfortunately limited to local multiplayer. At least the game supports download play so four players can play with just one cartridge. The multiplayer definitely holds a bit of an appeal given the unique shooting nature of Star Fox, but it does get repetitive after a while. In a nice touch, the game will show you a live feed of your opponent whenever you shoot them down, allowing you to bask in their frustration.

Presentation is one of this game's strong suits, at least in the graphics department. The graphics have been nicely updated for this iteration. Explosions and lasers blasts look great, ships animate smoothly through the detailed environments as well. Even the music sounds great. Unfortunately, this game has a Resident Evil level of voice acting, and that's not a good thing. Your wingmen in particular sound like they were recorded by 4-year-olds on a sugar rush. Slippy the Frog is an especially egregious offender, although Peppy the Bunny and Falco the Eagle are pretty bad too. Even the bosses have awful voice acting as they taunt you in the middle of your battles. No, you can't turn the voice acting off either.

The only thing keeping Star Fox 64 3D from being a slam dunk recommendation is the amount of gameplay that you're getting for the game's 40 dollar price tag. There are many, many iPhone apps and even games available on Nintendo's own online store that will provide many more hours of enjoyment for a fraction of the price. Still, Star Fox 64 3D remains a fantastic shooting experience that is incredibly well polished and great fun to play. Considering the dearth of shooters on Nintendo's 3D system, you could do way worse than taking Star Fox and crew out for some space blasting.