Mario & Luigi: Dream Team is a role playing game developed by AlphaDream for the Nintendo 3DS. The game was released on August 11, 2013.

If you're young, or just a young-at-heart nostalgic that grew up with RPGs when they were still coming into their own in the '90s and early 2000's, you'll find tons to enjoy with this title. What few missteps the game takes are phenomenally eclipsed by a great sense of joy, silliness, clever gameplay, and sheer imagination. Read More. 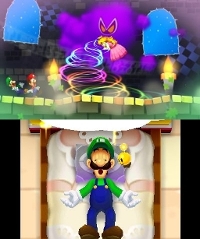