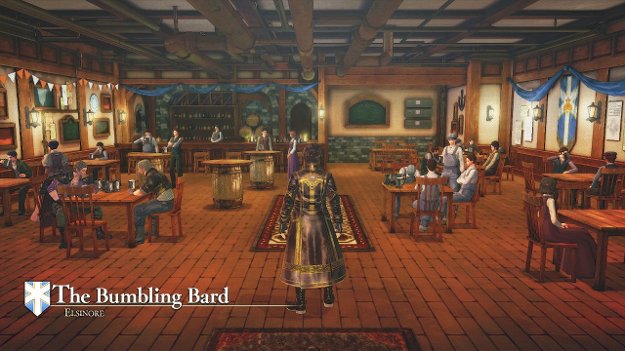 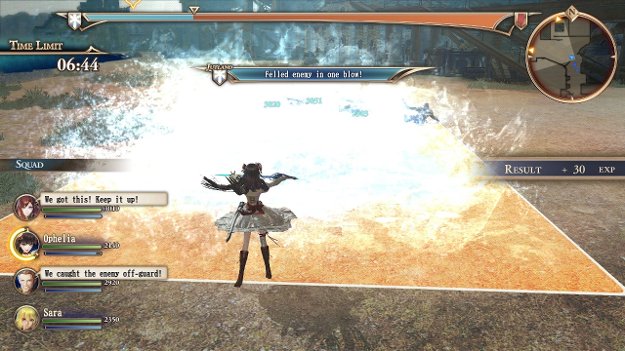 Valkryia Chronicles was a very well-executed game, a really interesting blend of real-time and turn-based mechanics, one that spawned a few (fairly disappointing) sequels and now, a sort of spinoff of the series, Valkyria Revolution. Unfortunately, the charm and ideas that made Valkryia Chronicles such a good game to play are all but absent in Revolution, instead leaving a repetitive, empty title that shares none of its predecessor's depth, characters, or story.

As a sort of spin-off title, Valkyria Revolution tells the story of five 'traitors' to their country of Jutland, five people who started a war to satisfy a personal vendetta. The game attempts to show this sort of 'war is hell' storyline, where there's no real right side to a war, and everybody suffers - but since the kingdom you start a war against is a tyrannical government that strives for nothing but power at any cost, the morals fall flat as they're simply one-dimensional bad guys, like any other RPG.

The story is told very poorly, too, mostly through cutscenes where everyone is just standing around talking to each other, with unskippable dialogue and a profound lack of anything interesting going on. This is also the only way any of the plot is conveyed to the player, but it becomes dull to the point where it's hard to tell who is talking. There were numerous times I found myself listening to conversations that I absolutely did not care about in the slightest - and when the majority of the game is taken up by these conversations, that's an issue.

It might not be so bad if the actual gameplay made up for the plot, but that's definitely not the case here. Gone is the turn-and-real-time hybrid strategy gameplay from previous entries in the series. Revolution instead plays more like an action RPG, running around the battlefield and cutting down enemies. In a somewhat misguided attempt to connect the game to the previous entries, however, there's a pseudo turn-based mechanic, where you need to wait between actions to get your actions back. This results in a jerky, awkward-feeling pace where you attack, then wait a second or two, then attack before waiting again (often standing right next to an enemy while doing so), and so forth.

There are options, like throwing grenades, shooting a gun, or using magical powers (known as 'ragnite'). However they still introduce that awkward pause, and strategically are rarely worth it (except for a couple of area-of-effect magic powers that can blow up more than a couple units at a time, unlike most of your weapons). Most battles are resolved by running to the nearest group of enemies and cutting them down as fast as possible before moving to the next. There are no tactics, no planning, and despite a battle map shown before the conflict, no reason to think on any sort of strategic level. You can't even open your map mid-combat, making it hard to tell exactly where you're supposed to go or what you're supposed to be doing. Hence, running towards the nearest enemy and hacking away at them until they're dead, whether it's a soldier, commander, or mech.

Between missions you're given the ability to strengthen your weaponry by mashing every piece of ragnite you can into it. This doesn't really feel like it makes a difference but probably does. Then it's back into the fray, likely playing another repetitive free mission in order to grind up your characters, making them strong enough for the story. The free missions themselves are as mindless as they come, asking you to just kill a bunch of enemies, defend a point, or open up chests scattered around the battlefield. But, skimp on these and you'll be getting your uniformed butt handed to you when the story missions begin, some of which have bizarre leaps in difficulty.

Graphically speaking, the game looks passable on the PS4, with a nice painter-style to the models. The models themselves aren't particularly impressive, and some characters look like poorly-drawn caricatures. That's not even getting to the 'Valkyria' herself, whose breast size seems cartoonishly proportionate to her level of magical power (that is to say, embarrasingly large). Playing on the Vita really shows limitations in the engine however, with enemies simply popping into view, distant models animating in jerky motions, and the art style from the PS4 more or less removed to save framerates. It's fairly disappointing.

Valkyria Revolution is disappointing, and not really worth anyone's time. It's not very fun, it's repetitive, and the story is lackluster in almost every way. People who liked the original games aren't going to enjoy this, and people who might just want an action RPG to fight through aren't going to enjoy it either, as there're a lot better options to spend your time and money on. Really, this is just a revolution not worth participating in.

Ed. Note: Please excuse the lack of images in this review. There's currently an issue with posting images to reviews. However we wanted to publish this before too much longer passed since the reviewer finished it.