Tower of Guns (Xbox One) 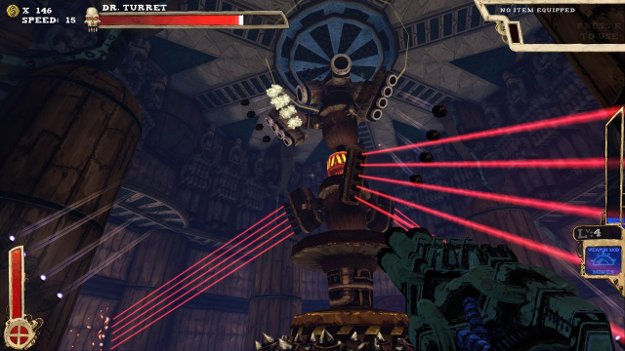 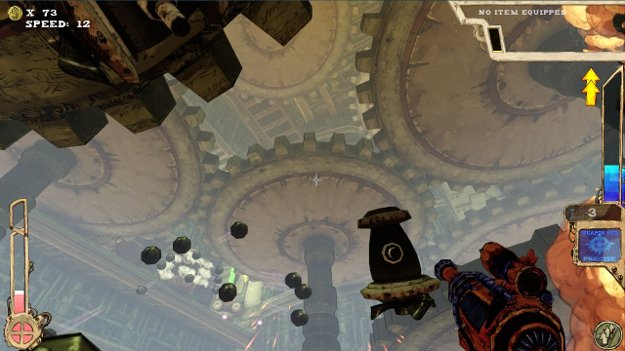 Many video games are complicated: they have lots of mechanics to learn and lots of characters to interact with. Other games are simple: they prefer to keep things simple so you can focus on more precise gameplay mechanics. Tower of Guns chooses the latter angle: You’re going to spend your time playing this title shooting things, shooting more things and shooting even more things to the exclusion of almost everything else. This simplicity is glorious.

Tower of Guns is a very strange game to try explaining to people. It’s a first person shooter but it lacks many of the staples of that genre (you only use one weapon per playthrough). It has many elements of a rogue-like, notably the fact that the game expects you to die constantly while unlocking better equipment. There are RPG elements to the rogue-like experience, such as leveling weapons or buying upgrades, but once the game starts basically all you’re doing is running, jumping and shooting stuff. When this was described to me as a rogue-like RPG first-person shooter I laughed. After playing it though the whole thing comes together surprisingly well. 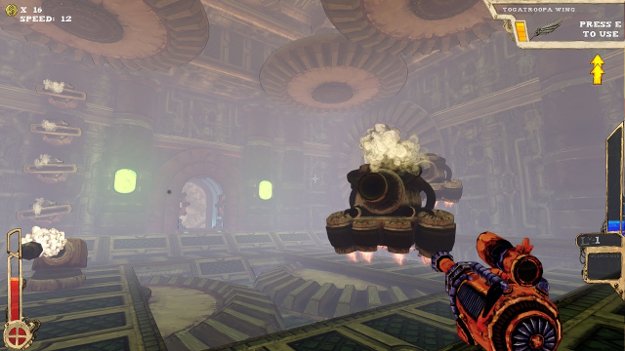 Well it does after the first hour of gameplay or so. When you first start the game it is beyond difficult. You only have two weapons – a dinky little pistol and a saw-blade launcher – and neither is very useful. The pistol is too weak and the saw blade launcher is just beyond slow. Since a better one unlocks when you die three times it’s not terribly hard to get to start up a much more enjoyably explosive experience.

In addition to your guns there are also perks to acquire. You can pick one perk per playthrough for a wide variety of effects. The initial two that you can choose from are triple jumps, good for maneuvering, or immunity to fall damage. As you perform a number of tasks, ranging from destroying a number of tanks or taking damage, you’ll unlock new perks to tailor your playstyle. For example you’ll want immunity to friendly fire if you’re going to be using the rocket launcher weapon. I personally tended to stick with immunity to fall damage for most runs since there are randomly placed platforming sections in the game and a few of them are insanely difficult. 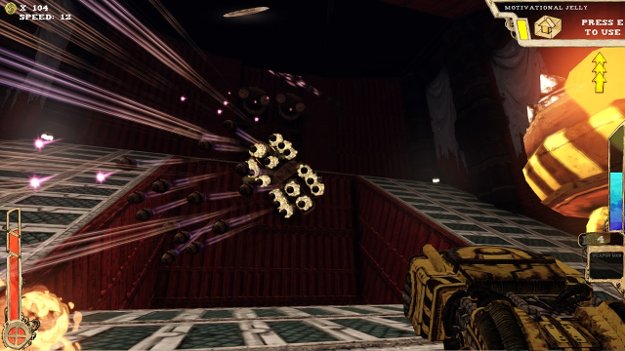 With all that said, overall the stages aren’t all that difficult. There might be a tricky section or two in the randomly generated levels, such as a wall of giant bullets being fired at you or a room that has floating squares that launch you around the room. But most of the time you’ll just be running around shooting at various forms of robot, whether it is flying bombs, a turret that shoots giant bullets or giant bladed spinning tops. The bosses on the other hand are much more likely to end your game since they’re almost all humongous, incredibly powerful and insanely dangerous. Lots of runs will end when you come up against a boss with a weapon that’s a bit too weak or not enough health to endure its relentless barrage of attacks.

So really it all boils down to a simple gameplay pattern: Start the game, clear the first level by beating the boss and then likely die in the second level. Do this three times to get a better gun letting you make your way further through the game, hopefully unlocking some better perks and weapons. Repeat as necessary until you beat the final boss. What’s funny is that the game, at best, two hours long from start to end. But actually accomplishing this is going to be hard as hell and take you considerably more than two hours.

One area where the game will catch some flak is in the graphics and sound design. Both of these are squarely set in what feels like the PlayStation era with very simple, polygonal graphics and stock sound effects. It is very underwhelming as you start playing the game but once you get into it things start to make sense. See the reason the graphics are on the “meh” side is because the game is going to be doing its best to fill up the entire damn screen with enemies, bullets and explosions. In some screens you’re lucky if there’s even a single place to stand for a few seconds without taking damage – it gets that bad at times. So you either get a game with awesome graphics that will stutter when combat begins or you get a mediocre looking game that runs flawlessly which this does by and large. I’ll take the playability.

What is important here is that Tower of Guns actually plays really damn well once you get past the initial difficulty of just starting the game. Your character controls very smoothly allowing you to walk, jump or hide from the various enemies and their attacks while gunning them down with ease. Some players may find it nearly impossible to play this game on consoles if they’re more used to mouse controls, and this is one of the few games that really feel like it benefits from that precision, but that’s a matter of preference.