The Surge (Xbox One) 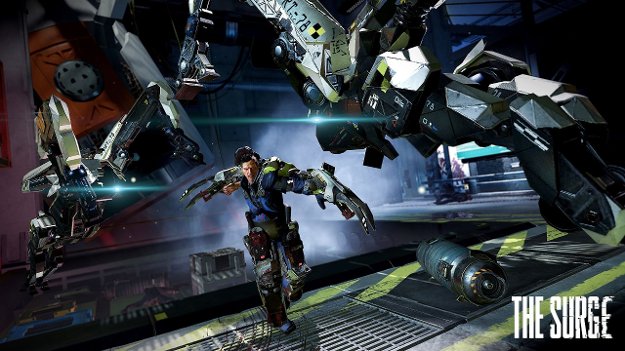 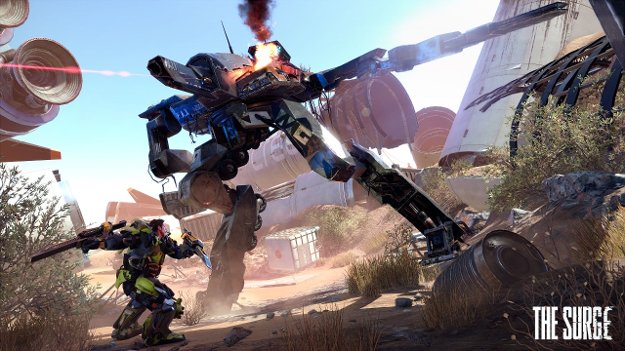 After the success of the Dark Souls games it was obvious that there would be imitators. One of the most prominent Souls-like games to be released on consoles was Lords of the Fallen. While somewhat flawed, it had a lot of promise. It had a slow, well-paced combat system that forced you to think before you attacked as well as a lot of ways to customize how your character played. The world was so vibrantly realized that even if the game didn’t do much with it, it’s clear the developer had the ability to really expand on this world.

The reason I’m mentioning all of this is that I went into The Surge expecting it to have some issues. But more than that I expected it to have a more fully realized world and story to it. The developers had shown that they had the capability to craft a brand-new world and bring it to life. Imagine my surprise at the fact that it’s a bit of dud. 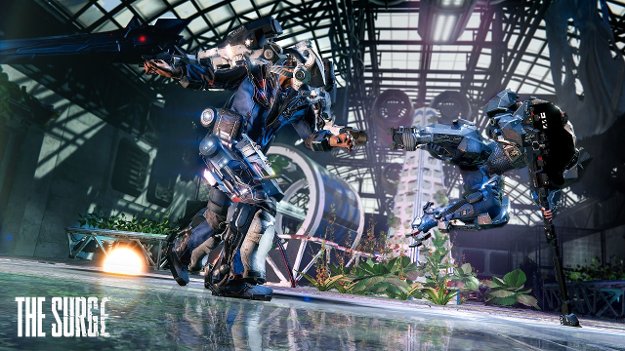 The Surge garners a lot of interest the moment it starts up. Dialogue plays that explains the world without a huge info dump while your character is arriving to his job on the first day. As you go through the first hour of the game, exploring a scrapyard and the robots inside of it, the world is slowly peeled back and you learn more about where you are.

While exploring the first area you are introduced to the core mechanics of this game – the limb removal. See, upgrading your character requires both scrap and materials. Scrap is gotten from killing enemies. Easy enough. But if you want the more exotic upgrade materials you’re going to need to extract these from enemies. Making this even more important is that many of the enemies you encounter are carrying / wearing equipment you’re going to want to take for your own. So, you’re really going to need to get your dismemberment on. 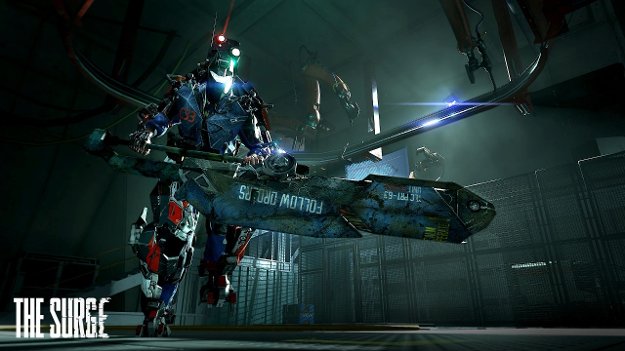 This mechanic is quite interesting. When fighting an enemy, you can either just attack normally or lock on and see what the status of their limbs are. If they have armor on, by removing that limb you’ll get a blueprint of that piece as well as components to craft / upgrade your equipment. Or, if you don’t need the components, you can aim for their unarmored parts since those are squishier. This means you can either kill enemies faster, and get no reward, or you can take your time to remove their limb and get loot.

While this does eventually become routine that doesn’t detract from how good it is. Many of the harder enemies in the game can be made easier, or harder, by removing a limb. For example: there is a three-legged scorpion… dog… robot thing you encounter in the third area of the game. It can either attack you with a lunging attack, a tail sweep, a backflip or energy attacks fired from the tails. The tail sweep is the easiest attack to parry. But if you’re no good at that you can cut off the tail to get a rather valuable material and remove the tail sweep and energy attack. Then if you keep your distance he’ll just keep lunging at you, leaving himself wide open to being destroyed. 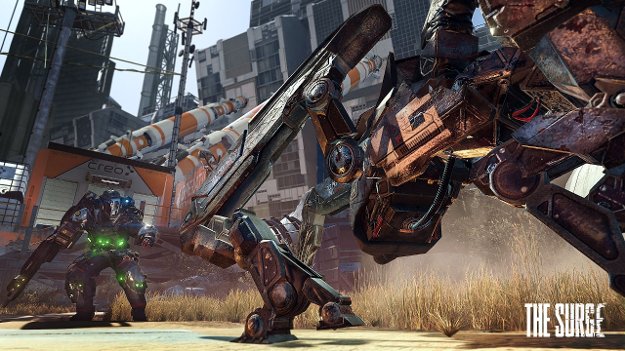 Pair this up with the generally very fast combat system, consisting of a lot of openers, dodges, parries and counterattacks. It’s much faster than what you would expect considering it’s a Souls-like game. In a lot of ways, it feels more like an action game except you must manage your stamina.

Unfortunately, after that first hour everything just really starts to fall apart. The combat system, that seems so well tuned, goes to crap as you start dealing with the more difficult enemy types. See, the developers just don’t give you very many options to experiment with. This lack of options throttles the more organic gaming experience you get in something like Dark Souls or even Lords of the Fallen.

In any combat situation, you have two choices – dodge attacks or parry. That’s it. Blocking doesn’t accomplish much of anything since you’re still taking damage and just wasting stamina. If you don’t have the reflexes to parry attacks reliably then you have no choice but to dodge attacks. There are absolutely no shields so you’re not going to be able to defend yourself against attacks. Plus, you often die in only a few hits, bosses routinely able to land two shot kills, so have fun with that

Now this would be fine if the game made this feel like it was your choice but it doesn’t.

While there are a bunch of weapon types they’re all very similar. By and large the only real differences are a general theme of the weapons. For example, most of the “Twin-Rigged” class weapons are fast, attack in rapid succession and drain little stamina. But almost all of them are solely cutting tools so they’re useless against armor. So, you would think to just equip another type of weapon, say a Heavy-Duty weapon that has more crushing offense against armor.

Except the game gimps you here by introducing a weapon proficiency system. The more you use a weapon the better you get with all weapons of this type. As your proficiency rises you gain a damage bonus. This bonus interacts with the damage scaling of the weapons you use. Essentially the breakdown here is that the higher your weapon proficiency is the more damage you deal. Thus, if you have never used any Heavy-Duty weapons for the entire game, if you suddenly get a great weapon of that type you’re going to have to grind enemies to increase your proficiency to the point that it’s a viable option. 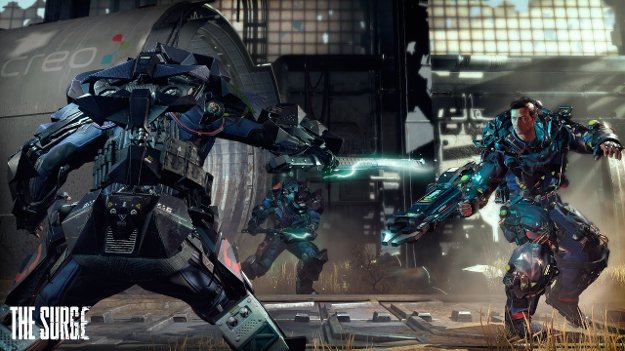 This represents a microcosm of the problems with this game. The developers simply go out of their way to ruin the emergent gameplay elements so crucial to what makes Dark Souls so beloved. You got a cool new piece of armor! Is your core upgraded enough that you can use it? Nice weapon! Is your proficiency high enough to make using it worthwhile? Hey, you got one of the few useful implants! Oh, it looks like your armor is eating up too much energy so you can’t use it. You have a drone now! It’s basically useless except for drawing aggro from enemies.

Every step of the way it feels like you’re fighting against The Surge to play the game how you want. In other games of this ilk it’s usually apparent that if you want to use a stronger weapon, you must boost your strength. But once you do so you can go hog wild, even to the point of encumbering your character. Here it feels like the game goes out of its way to block your attempts. 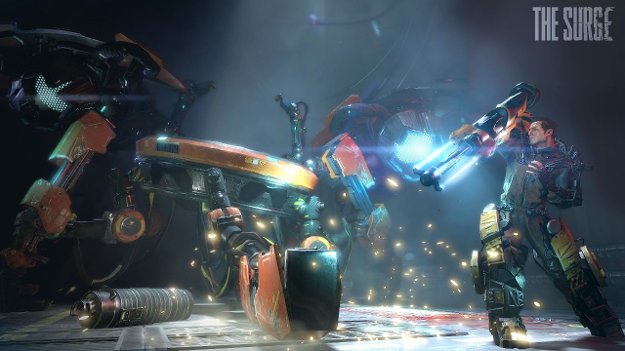 Most of the time this means your best bet is to simply use the very first armor set you get in the game. The LYNX gear gives bonuses to dodging, reduces stamina consumption and lets you attack faster while at full health. Since it has low core requirements you can experiment with the implants to your hearts content. Most of the better armor just isn’t good enough, either statistically or ability wise, to waste time with until you’re far into the game. Since most armor sets have crappy set abilities you can just mix and match as you like during harder battles.

Normally this wouldn’t be such an issue since much of your time is spent exploring the world, dealing with basic enemies and finding new stuff. Except there just isn’t enough variety in any of these elements. There are roughly eight different types of enemies with the only difference being what armor they wear as well as increased damage and defense. It’s two steps away from a palette swap really. You get armor and weapons rarely enough that you’ll often use the same weapon or two for most areas. Lastly every area after the first is just a series of dull corridors and bland connected rooms that are intensely repetitive.

This is made even more disappointing since the developers have stated that they wanted to make the world more interesting with less of a focus on the bosses. Since most Souls games are so boss-centric they went a different route. A decent idea but they ignored the bosses far too much. The five bosses, ignoring that one is a reskin of a tough regular enemy, are immediately forgettable. The first one can be tough even when you know what to do since the fight is so fiddly. But the rest are incredibly easy once you know what to do.

The worst part of all of this is that the game has a lot of promise. There is a very interesting story here but it never really goes anywhere. You’ll need to pick up every audio collectible to even get a good idea of what’s going on. The other characters you meet end up contributing little other than sad side quests. Only one character really impacts the story but she’s only spoken to three times for all of ten minutes of screen time. Then when you finally finish the game, regardless of what ending you pick, it all ends basically the exact same way. Basically, nothing you did really mattered and Earth is screwed. Ta-da! Thanks for playing!

What’s infuriating about this is that The Surge isn’t a terrible game. Realistically speaking it’s a better than average game. It looks great, sounds rather good and is clearly a labor of love. But it’s also a hollow, joyless experience that doesn’t stick with the player. The game provides no mythos to chew on, no interesting concepts to discuss with your fellow players. Months from now the only part of this game I’ll remember is the song that plays during the visits to the Med-Bay.