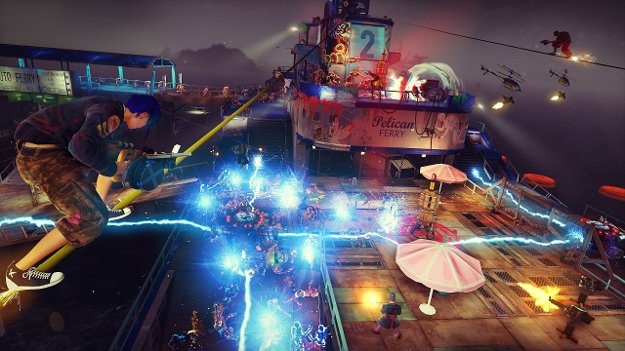 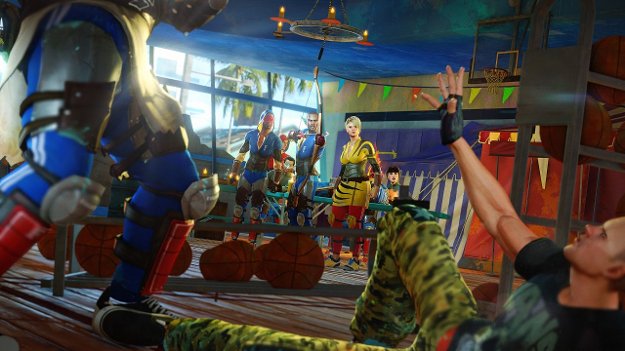 When people talk about something starting off with a bang, one is often inclined to brush them off as exaggerating. After all, that phrase sounds emphatic enough but it’s so overused that it may as well mean nothing at all. So let’s instead say that Sunset Overdrive starts off with a goddamn nuclear explosion and just never stops. There are a few bumps in the road but honestly these are pretty minor when you step back and look at the whole scope of the project before you.

Sunset Overdrive is one of the most over the top games I think I’ve ever played. Nothing is ever simple in this game – In most open world games you get in a car and drive or simply run to your destination. SO instead has you leaping, flipping, bouncing and grinding across every surface in the city. Want to shoot an enemy? Well sure, you could use your boring old pistol or rifle but why not use a teddy bear strapped to TNT or a sprinkler that shoots acid? It’s a game that never settles for doing things the easy or simple way. It instead blows expectations all the hell up and laughs about it. 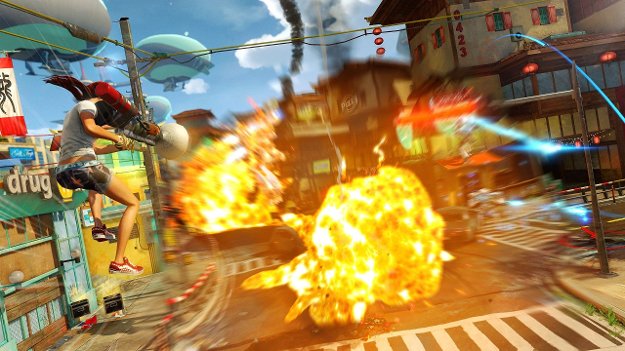 What’s nice is that SO does throw up a strong story in the middle of all of this. The plot starts off rather simply and doesn’t get too complicated as it goes on, with few really surprising twists or anything of the like. But unlike many other games with a simple story, it isn’t dumb. It knows what sort of game it is, what sort of plot it has and knows exactly how it wants to tell it. When you’re going to go utterly over the top with sheer insanity you need to embrace it. No, not just embrace it – you really need to grab hold of that silliness and run with it straight to the end zone. A good example of this, as a point of comparison, is the third and fourth Saint’s Row games.

So you are Mr. or Mrs. [insert name here] and you work a crappy job as a janitor. You’re working at a party for the release of a new energy drink, OverCharge Delirium XT when people start getting sick before mutating into deformed monsters. You flee for your life and end up stuck in your apartment for a few weeks. But once you emerge into the world you see that the city is wrecked, the company behind that drink has locked down the city and you’re on your own. Luckily with a few allies you can fight back against the monsters, the squads of hostile humans and other baddies that infest Sunset City, maybe even finding a way to escape it.

Fighting back against the city turned upside down requires you to use all of the abilities at your disposal. Luckily, for some adequately unexplained reason, you are superhumanly agile beyond all expectation. You can leap rather high on your own but if you land on top of certain objects you can bounce off of them to gain incredible air time. But most of your movement will be done by grinding along rails, beams and various other surfaces. 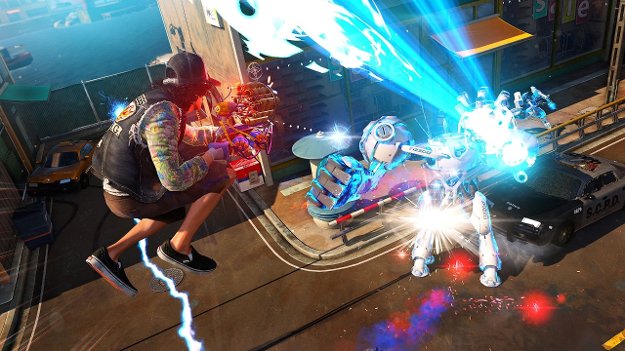 Combining these abilities is necessary to get around the city and defeat the enemies as efficiently as possible. Leap onto a car, bouncing into the air, land on a power line, grind along it down the street before leaping to a building and wall-run along it while shooting at enemies. Treat the floor like hot lava or you’ll get gunned down in a heartbeat. Later on you’ll find that even the cars and cables aren’t safe due to advanced enemies so you’ll have to master even greater movement abilities that are unlocked over time. These city traversal abilities are a core part of the gameplay and since you only need to use two buttons for all of your abilities (beyond dashing) it’s a very easy skill to pick up. The only weakness to this system is that sometimes it’s very hard to aim where you end up, so you could end up riding a power line when you wanted to swing along a pole or going left when you wanted to go right, immediately falling off the line or some such. It’s not a huge problem but it can be off-putting for some due to how loose it feels.

But you’ll also need to rely on upgrading your weapons if you want to survive some of the beasts that roam the city streets. Luckily, you're moer than covered in that regard. I’ve been a fan of Insomniac for a long time and the main reason for that is the unique weaponry that they put in their games. Luckily Sunset Overdrive doesn’t disappoint in this regard. The exploding teddy bear’s and acid sprinklers above are practically normal by the standards of the game. You’ve got guns that shoot M80’s that set off colorful explosions after sticking to enemies for a few seconds, guns that fire helicopters with turrets, devastating boomerangs, rubber duckies that create holographic decoys and a harpoon that spreads OverCharge to lure in enemies. 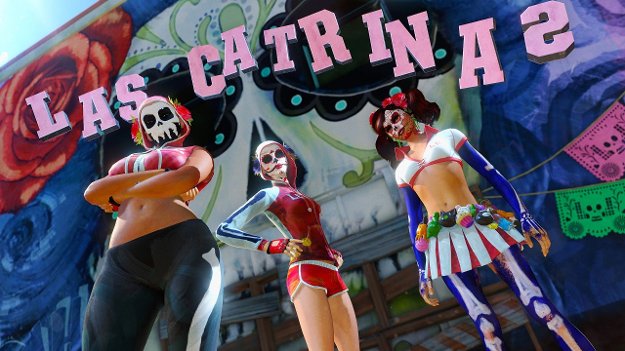 In addition to mastering your movement abilities and weapons you’ll also have a wide variety of Amps and Overcharge abilities to master. Amps are brewed up by one of your allies at the home base by finding various collectibles around the city (shoes, toilet paper and other weird stuff) or by completing a few missions for him. Either way there are various types of Amp to equip, some that go on your weapons and others that go on your character to modify your abilities or melee skills. There are Amps that let you create explosions when you bounce, spew flames while grinding or fling fireballs when you swing your melee weapon.

Overcharge abilities are earned while you perform actions around the city. Kill enemies of each faction? Gain badges for doing so. Badges are gained for grinding, pole swinging (tee-hee), bouncing or wall running, so on and so forth. Generally these provide you with bonuses to damage or damage resistance as well as a wide variety of other, minor bonuses. You’ll also find Overcharges that need to manage your style rating, the meter that increases as you fight and perform cool stunts, which actually activate your amps in the first place to help in a tough spot.

What’s great about Amps’ and Overcharge abilities is how they let you customize your character. When expecting to deal with Scabs, the hostile humans, equip abilities to do extra damage to them / take less damage from them. These abilities become incredibly important when you get to the awesome boss fights where, if you don’t modify your ability loadout, you’re going to be in for a world of hurt. Personally speaking I found I had weapons I preferred for each faction and Amps / Overcharges I used most of the time, only swapping those for the aforementioned boss battles. 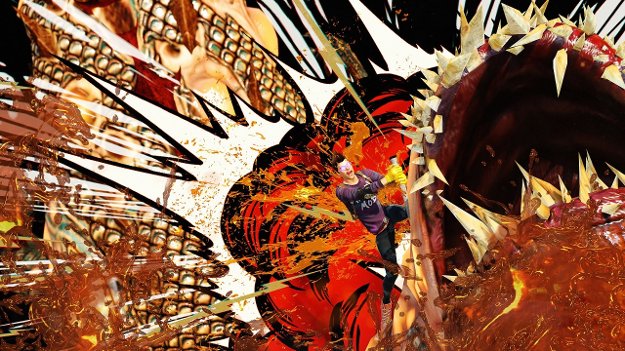 What’s also fun is how deep the character customization is. You can choose between small female, medium sized male or female and huge male. Then you have a wide breadth of hair options (scalp and face) and clothing to pick from. Clothes can even be layered so you could wear a long sleeve undershirt, a t-shirt and a vest over it with all of them showing properly. With each piece of clothing have a number of textures / colors to pick from, your options are very broad. Plus more can be unlocked over time, whether by purchasing it or earning it from a mission completion. Even better is that you can swap between male / female, face or body size at will, meaning you’re never stuck with any part of your character you don’t like.

If there’s one part where Sunset Overdrive flounders a bit it’s on the defense missions. Whenever you upgrade your Amp creation capacities, something you do at each base with Floyd (your chemist), you have to defend your base from a huge swarm of enemies. In gameplay you have to do this a few times and each time is a huge pain in the rump. While it’s cool to set traps for the hordes that besiege you, managing the traps while dealing with massive amounts of enemies, while defending your gates so enemies don’t get to your vats is just a massive frustration. It’d probably be more fun if a complete gameplay change happened here so you were dealing with it entirely from a new angle. The game has a few other large gameplay changes during the storyline so one here would have been a nice change.

Even more frustrating is that the online mode, Chaos Squad, is basically entirely composed of these. You join into the game from your single player mode, vote on missions with your party and then embark on those. As you do these you can either make the final fight harder or gain team boosts. When you reach the defense mission you’ll find it to be quite spectacular watching up to eight people flip around and blast enemies to pieces these modes are just a pain in the butt and only a bit more fun than doing these solo. At least the bonuses are nice… 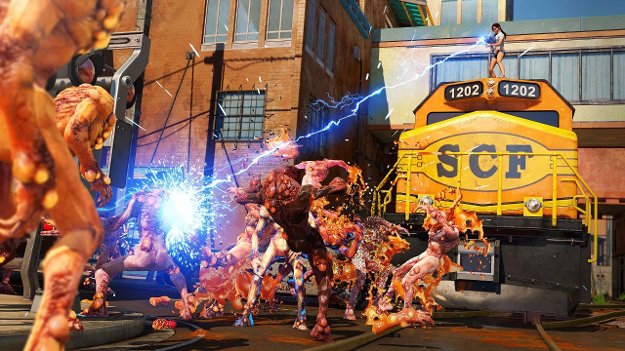 Speaking of the spectacle, Sunset Overdrive is absolutely gorgeous. The city has a fantastic personality in and of itself, thanks to the wide variety of building shapes, colors and surfaces to bounce around on. SO doesn’t have a tremendous open world to move around in but, unlike most other open world games, this game has a whole lot of verticality to it. You spend so little time on the streets that whenever you find yourself going high or low the whole city changes look. Add in how cool the characters look and how finely the hideous mutants that now rule Sunset City are detailed and this is probably one of the best looking video games I’ve played. Sure, it might not be as shiny as a max graphics PC game but the sheer color and vibrancy gives the game its own life.

Also setting the game apart from others I’ve played is how reactive the soundtrack is. The game has a huge bevy of music to pick from and as you fight enemies it will start to play music, intensifying as your style meter gets higher. I’ve actually been hearing one of the songs that plays as you traverse the city in my head since I got my grubby hands on this game. On the other side of the audio design is the voice work – Yuri Lowenthal throws out a heck of a job as always but I personally find Stephanie Lemelin, the female main character’s voice, to be more enjoyable. It feels like I’m controlling Artemis from Young Justice which is awesome! Really everyone turns in a good job and it feels like a lot of attention was paid to making sure that even the bit characters had a lot of effort put into ensuring their dialogue was up to snuff.

To be frank if it wasn’t for the Chaos Squad mode, and the defense missions in general, this game would have been given a perfect score. As a matter of fact you may find that you like these modes and the game deserves the maximum. Bluntly put, Sunset overdrive is an utterly amazing game that’s without a doubt the killer app that the Xbox One has needed. It’s a great game full of well-designed set pieces, awesome boss fights and a wide variety of customization options that let you play the game how you want. It’s funny, it’s well designed and, most importantly, it’s a damn fun game. Consider this a must own for Xbox One owners.