Sunset Overdrive: Mystery of the Mooil Rig (Xbox One) 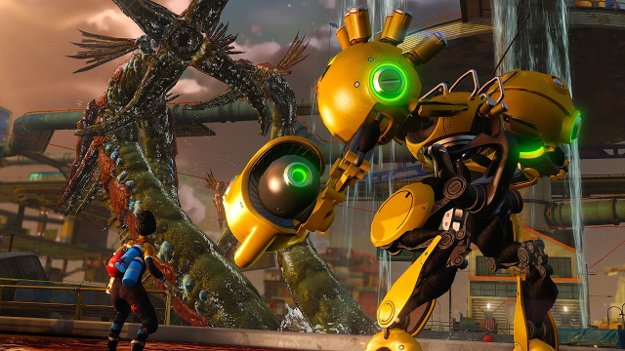 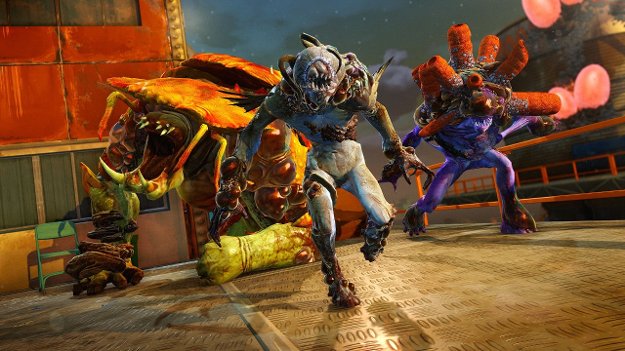 I’ve made it no secret to anyone in listening distance that I love Sunset Overdrive. Friends, family and anyone else who happens to be within earshot have been forced to listen to my adulation for the game. There’s something about the over the top violence, absolute silliness, great music and imaginative arsenal of weapons that just made the game really connect with me. So, saying that, I’m obviously going to be a huge fan of any DLC that releases for the game, thus my positive opinion of The Mystery of the Mooil Rig should be no surprise. That’s not to say it doesn’t have some flaws. 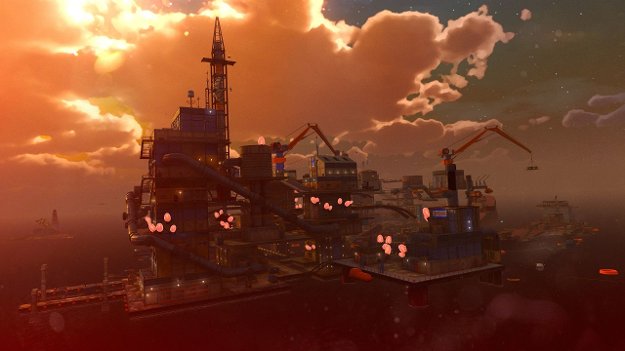 This DLC starts with the simplest of beginnings – Troop Master Bryllcream sends you a message, asking for your assistance. He wishes for you to help him rescue his previously unmentioned sister from an oil rig in the waters off the coast of the city. To help you do this you’re given two new abilities dealing with water travel –you can either dive into the water and leap out super high or leap into the air and slam down into it before shooting all the way up into the air.

Upon arrival at the rig you will be greeted with a large, highly vertical playground to slide around on. Pipes to bounce off, rails to grind on, broken pathways and boats to bounce off, it’s all found here and in a much tighter zone than it otherwise does in the city. Whereas the city is a spread out, horizontal location the oil rig is all about making your way up or down the numerous levels of this surprisingly large zone. It’s made even more interesting thanks to the new OD monsters. They’re variations of regular monsters but with interesting twists to them – the regular monsters have this weird, sliding movement that makes them hard to shoot, the Poppers now leave burning oil slicks when they die and the larger beasts that and the Spawners feel a heck of a lot faster than the regular ones in the city.

What follows upon arrival is a series of six missions that are very funny, well written and quite enjoyable. They’re just very short. The first mission is fairly long as is the last one but the ones in between are very short, especially if you’re good at navigating the rig. It seems like the game expects you to fail, either due to difficulty or failing because of the mission timer expiring when you miss one jump and can’t climb back up in time. But if you don’t then you can blast through the missions rapidly. This is disappointing but the quality of the missions is very high, especially the finale against a giant OD sea monster the game makes no effort to pretend isn’t going to happen.

Normally I’d ignore the short length since it’s just some DLC but Sunset Overdrive is so full of stuff to do. Collectibles, side quests, challenges – there’s just so much stuff. Because of that I expected to see more in the DLC but what you ultimately get is six missions (a few that are very short), two sidequests, one weapon and about four challenges. That’s it. Even the new traversal abilities that I’m quite fond of are only useful around the water which is an incredibly minor part of the game. So it’s a great experience but what is there to it? Unfortunately, just not that much.